The uncomfortable bond which cannot be got rid of

Bandhan (1969) is a movie of Rajesh Khanna that had come post Aradhana and became a hit in the wake of his craze in the Indian audience those days. It’s an interesting movie with the story containing a rural milieu. Some good songs and a couple of brilliant performances have added value to the script which is the biggest plus point of this movie. Good script with the charisma of Rajesh Khanna led this movie to become a box office grosser.

In my reviews of Ehsaas (2001) and Ferrari Ki Sawaari (2012), I have dealt with the issue of father-son bond. It’s supposed to be positive most of the time. However Bandhan (bond) deals with it with a completely different story. Here the father is a baddie and the son is a nice, innocent and benevolent person. Resultantly, there is no love lost between the duo. There is only tension between them which finally leads to disaster. The bond is there between the father and the son but due to the completely different approach towards life and ethics, this bond is quite uncomfortable. However since it is linked to blood-relation, it cannot be broken or got rid of by any of them, especially by the son who is good but unfortunately has got a bad father.

Bandhan tells the story of the family of Jeevanlaal (Jeevan) who is a habitual criminal and always creates problems for his wife, Sita (Achala Sachdev) who is a woman of morals and principles. Jeevanlaal is a known bad character in the village and a history-sheeter in the police record. His visits to jail are quite frequent and he doesn’t give a damn for that. He is hell-bent upon living the life the way he has always lived with little intent for reforming himself or opting for straight life. Sita fosters her son, Dharma (Rajesh Khanna) and daughter, Meena (Meena T.) with a lot of hardship and with the occasional help of the money-lender of the village, Maalik Raam (Kanhaiyalaal) and his wife, Jamuna (Ratnamala). Dharma works hard in the fields and with the help of his savings and some loan from Maalik Raam arranges his sister’s marriage with a suitable boy. Maalik Raam’s daughter, Gauri (Mumtaz) and Dharma fall in love with each other. Meantime, the tussles between the father and the son keep on going and one day the bitterness crosses all the limits with Dharma leaving the home as well as the village and migrating to the city to reach Dr. Sonia (Anju Mahendru) who knows him very well due to her working in his village for some time.

One day Sita gets the news of the return of her estranged son to the village and she reaches the bus stand to receive him but not finding him there, she returns home but gets shocked to find her husband, Jeevanlaal lying dead and Dharma standing there with a blood-stained axe in his hand. Dharma confesses for his father’s murder and he is tried in the court. Dr. Sonia’s brother, Ravi (Sanjeev Kumar) who is an advocate, acts as the defense counsel for him. Dharma is not ready to tell as to why he killed his father. The truth comes out in the end and Dharma gets acquitted to reunite with all his beloveds.

The final reels of this movie have a striking resemblance with Salmaan Khan starrer movie – Garv (2004). May be the writers of Garv have taken some inspiration from the story of Bandhan. However unlike Garv, the trial of the hero has not been given long footage in this movie. Here it is only in the ending reels whereas the major part of the movie has been dedicated to the village life of the family and the associated ones and the bitterness between the father and the son. 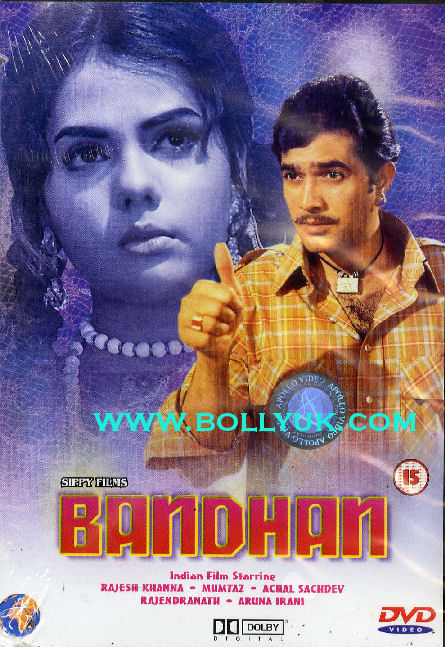 The biggest plus point of Bandhan is its interesting story and the skillfully written screenplay which has covered the somewhat routine direction and made the movie an engrossing one for the spectator. The most impressive and interesting part of the movie is definitely the courtroom drama that follows Jeevanlaal’s murder but prior to that too, the movie maintains the interest of the audience throughout with the help of songs, dances, romance, comedy and sentiments. There is no boredom in the movie at any place.

The movie emphatically underscores the bonds of brotherhood (and sisterhood) in the Indian villages where the main occupation has been peasantry only. Despite being financially weak, the villages are always helping and standing by one another in all the times of joy and grief. The honour of a family is considered as the honour of the whole village. Even the money-minded money-lender is not completely a blood-sucker. He is human and able to adjust his money-matters with the significance of the social responsibility at hand. Decades back, the Indian villages were like that only. At least, I believe them to be so prior to the ‘Green Revolution’ in India. The filmmaker has also portrayed the pains and pleasures of the life of an Indian peasant quite emphatically quite in line with many other Bollywood movies made with a rural and agricultural backdrop that had come prior to and subsequent to this movie.

This interesting movie has been strengthened by the good performances delivered by the lead actors. This is perhaps one of the meatiest roles of Jeevan’s acting career (other than his Naarad Muni role in the mythological movies). His clashes with his wife and son are pretty impressive and he has been able to generate enough hatred for himself in the audience. Rajesh Khanna is present here without his famous gimmicks and is natural for most part of his role. Instead of the clean-shaven look of an urban youth like in his other hit movies, here he has been given the macho look of a peasant, sporting a mustache. He has romanced well too with Mumtaz who made the most successful on-screen pair with him. She looks very beautiful and the teasings taking place between herself and Rajesh in the movie are romantically appealing. Among others, Achala Sachdev, Sanjeev Kumar, Anju Mahendru, Kanhaiyalaal, Ratnamala, Meena T. etc. have done well. Aruna Irani has delivered a sentimental performance in her role of a courtesan.

Technically, the movie is good. Since the whole story takes place in a rural environment, the art director and the cinematographer deserve full marks for creating a beautiful (and believable) village on the screen. The scenes are eye-soothing and there is nothing that appears to be artificial. The length of the movie is also ok. Comedy scenes could have been shortened but they are in line with the norm prevailing in that period. Comedy through specialist comedians was considered a must for regular movies then without which the audience used to feel that something essential was missing in the movie.

Kalyanji Anandji have composed good music with the help of the lyrics penned by Anjaan and Indeewar. The best song is Aayo Re Aayo Re Aayo Re, Saawan Aayo Re (by Mahendra Kapoor and chorus). Other songs – Aa Jaao Aa Bhi Jaao, Bin Badra Ke Bijuriya Kaise Chamke, Arre Jaana Hai To Jaao etc. are also good to listen and to see.

Bandhan is good movie to be liked by not only the fans of Rajesh Khanna but the movie buffs in general too.