Kuchhe Dhaage which is actually pronounced as Kachche Dhaage is a Hindi movie which was released in 1973. Produced and directed by eminent film director of Bollywood – Raj Khosla, this movie is a brilliant blend of action and sentiments. 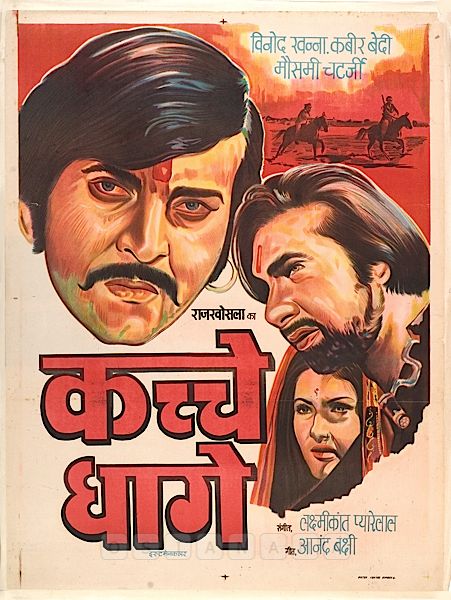 The ravines of India used to be inhabited by the bandits who called themselves as Baaghis (rebels). They had to rebel against the society and the system which inflicted injustices on them. Thus they had their own justification for raising arms and going for their bloody activities. But ! They were also human-beings and directed by sentiments in their hearts. This movie highlights this aspect of the life of the Indian bandits. 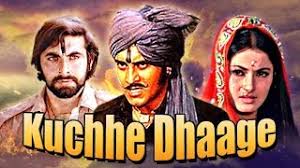 Kachche Dhaage (fragile threads) is the story of two bandits – Laakhan (Vinod Khanna) and Roopa (Kabir Bedi) who are thirsty for each other’s blood. The reason for their enmity is traced to murder of Roopa’s father (Kabir Bedi in another role) by Laakhan on account of his giving information about Laakhan’s bandit father to the police due to which he had been caught, tried and hanged. Roopa was in the army but hearing about his father’s murder by Laakhan, he also became a bandit. 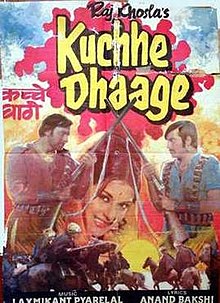 Now these two heroes are aiming at each other in order to settle respective scores. Roopa is decent and does not believe in harming innocents whereas Laakhan is not only cruel but also licentious who carries out rapes also. Their lives change when they come across a beautiful village girl Sona (Moushumi Chatterjee). Both lose their hearts to her and she becomes another bone of contention between them. However their hearts get broken when they come to know that she loves a village boy Bhola (Ritesh). 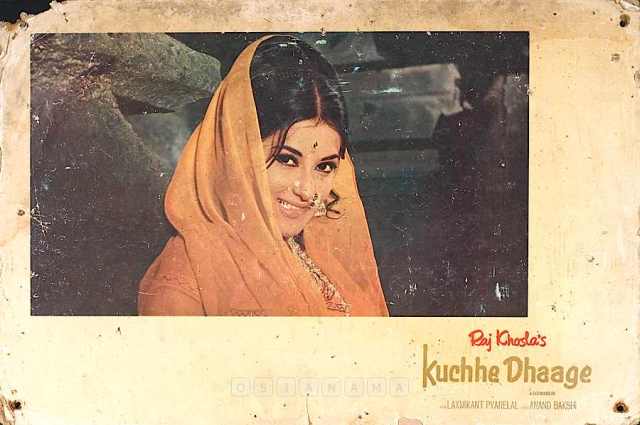 Girls in the Indian villages are even today not able to choose their life-partners at their will what to say for that period of early seventies. Sona’s marriage is fixed with a moron against her will. Since both Laakhan and Roopa are in love with Sona from the core of their hearts (though Sona is not aware of their inner feelings), they are left with no choice but to help her through thick and thin. 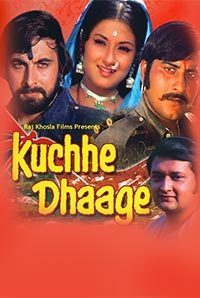 Now both these bandits have a difficult choice before them – whether to continue with their enmity or join hands to save the life of the girl they sincerely love. The mission of saving Sona from an undesirable marriage is not so easy for them as the police is also sniffing them like bloodhounds and their own lives are in danger. The movie ends on a highly emotional tragic note. 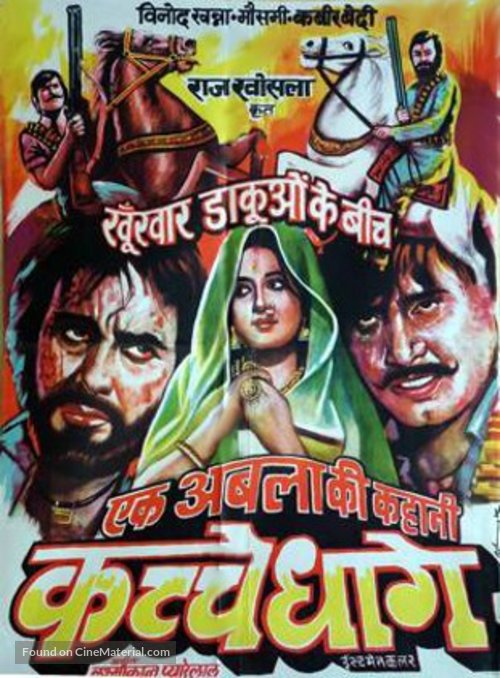 The title of the story is as such because it underscores that the threads of love are fragile when not given importance but they are mighty enough to take on the whole world when given importance by the concerned. Love is such a powerful sentiment that a passionate lover can do anything for his / her love. Own life can be laid down as well as others’ lives can be destroyed for the sake of true love. Even when the lover is a ruthless bandit, he cannot ignore the call of love. 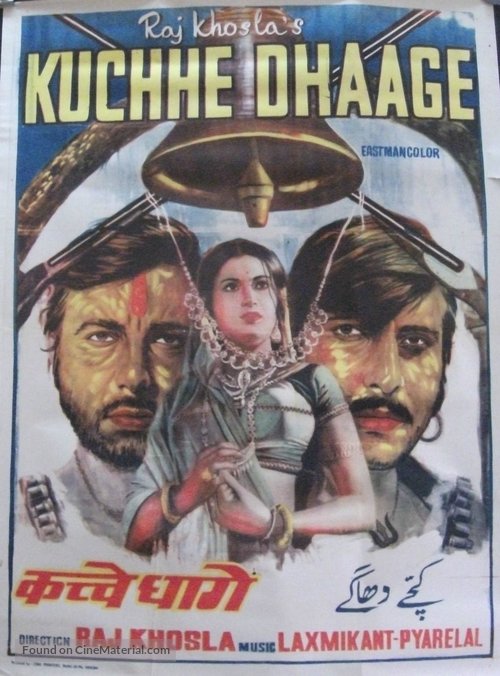 The highly proficient director Raj Khosla has handled the script of G.R. Kamath very well. Akhtar Romani’s impressive dialogues ably support the screenplay. The movie is studded with impressive scenes and the human aspect of the bandits gets prominence in a major chunk of the narrative. The director has not gone for a romantic portrayal of the bandit’s lives, he has kept everything realistic including the harsh reality of rapes committed by bandits to meet their sexual need. The commonfolk used to visualize bandits as horse-riders with guns in hands and living an adventurous life but Raj Khosla has not gone according to the popular notion about them and showed their troubles, hardships and pains. 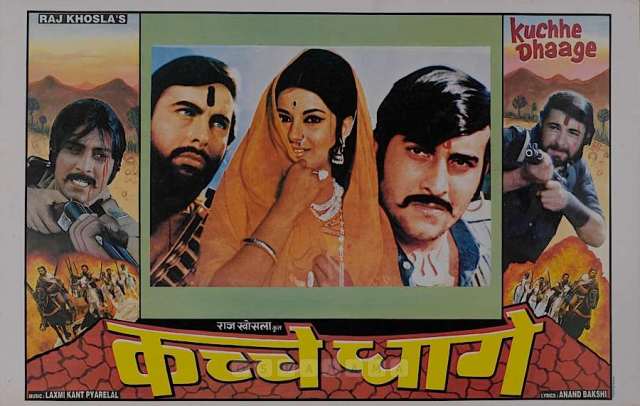 The narrative is not only damn interesting with little boredom throughout the duration of the movie but also moves the spectator at many places. Seeking revenge by picking a firearm was considered desirable in the Indian villages in that period but then there was no looking back possible. Once a bandit, always a bandit. The police, the judiciary and the society at large were seldom sympathetic towards them and hence leaving the path of  banditry was never easy. That’s what Laakhan highlights when he curses his mother (Nirupa Roy) for making him a bandit to seek revenge for his father’s death. It’s a thought-provoking movie from this angle. 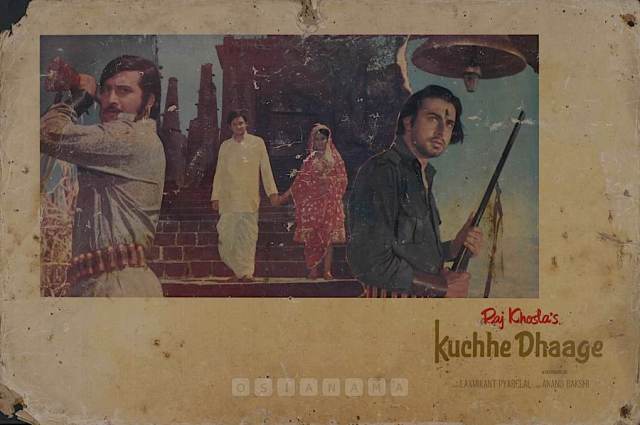 The climax of this movie has been copied in many other movies (including certain commercially successful recent movies). However in no other movies, have I found the climax as that impressive and tear-jerking as in Kachche Dhaage. It’s meant for the sensitive people who can empathize with the feelings of the heroes. 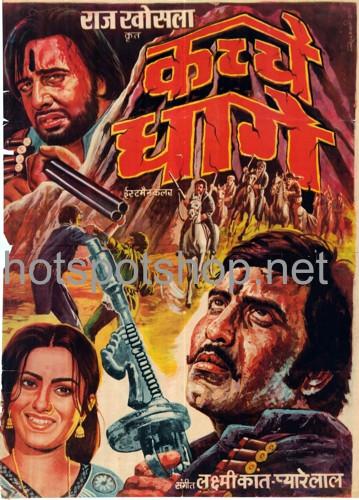 Technically superior in almost all the departments – art direction, cinematography, choreography, action and thrill, editing, background score; this movie is a visual treat because of the rural beauty scattered all over. Especially in the song Mere Bachpan Tu Ja, the scenic beauty is marvellous. 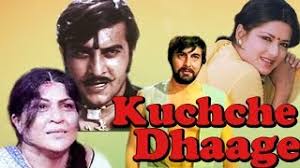 Performance wise talking, almost everybody has done justice to the assigned role. The movie features Kabir Bedi in a double role (of both the father and the son) and he is simply superb. Vinod Khanna is no less. These two heroes who appear to be real bandits in the get-up given to them, light up the screen in the scenes featuring them. Moushumi Chatterjee was very young at the time of this movie and she has delivered a brilliant performance with her raw and innocent looks. Just watch her in the song Mere Bachpan Tu Ja and you may also lose your heart to her just like the heroes of this movie. 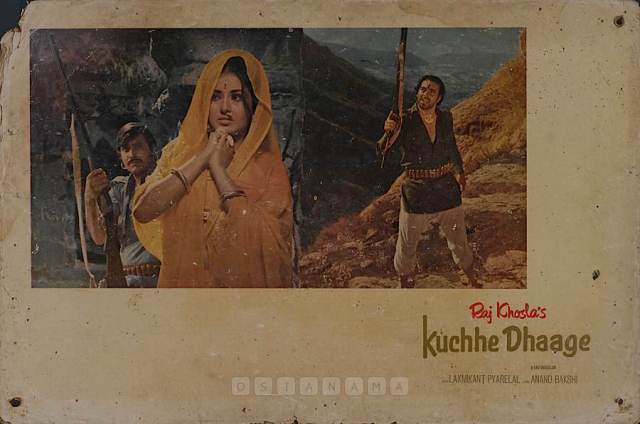 Music composed by Laxmikant Pyarelaal with the help of the lyrics of Anand Bakshi is damn good. The title track (Kachche Dhaage Ke Saath Jise Baandh Liya Jaaye), Mere Bachpan Tu Ja, Haay Re Haay Re Ek Ladka Mujhko Khat Likhta Hai, Ja Re Ja O Diwane, Zara Se Agar Bewafa Hum Na Hote; every song has its own impact, its own moments, its own melody which remains with the listener for long. 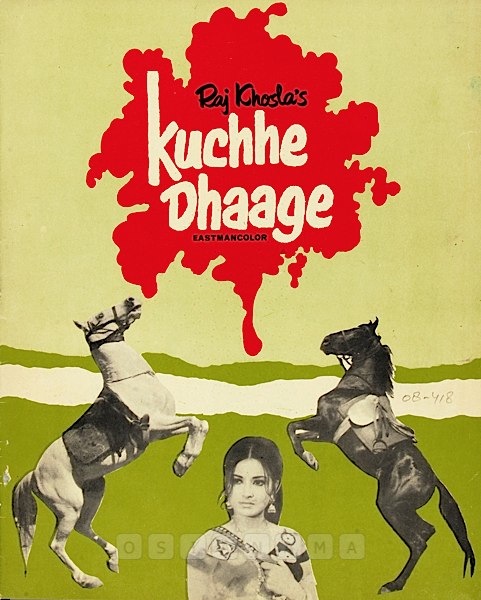 A plethora of movies have been made in Bollywood on bandits especially during the sixties and the seventies. However Kachche Dhaage (or Kuchhe Dhaage) cannot be compared with other formula based run-of-the-mill movies. It’s a class of its own. I recommend this highly touching emotional drama with a banditry background to the movie buffs of all the categories.

4 Responses to The might of the fragile threads of love