I liked Yash Raj Films production and Habib Faisal’s venture – Ishaqzaade (2012) starring Arjun Kapur and Parineeti Chopra in lead roles because I found it entertaining. When I had read about it (prior to watching), I was thinking it to be on the lines of more than a decade old Akshay Khanna-Sonali Bendre Starrer Dahek (1999) on account of its being a tragic love story of a Hindu boy and Muslim girl. However when I happened to watch Ishaqzaade, I felt that it’s not on the lines of Dahek and the so-called honour-killing statement was unnecessary imposed on the narrative by the ending assertion. Actually, this way the writer-director, Habib Faisal has tried to make a fool of the audience by showing off as if the movie were an exemplary one. Actually, had the lead pair of Ishaqzaade been belonging to the same religion, it would not have made any difference to the story. But then, I was getting a sense of deja vu also. The idea and certain incidents were appearing quite familiar to me while my eyes were on the screen. And when finally, the boy and the girl ended their lives on the screen, bringing the story to its conclusion, I got illumination in my mind as to what’s been the real inspiration behind this movie because the movie I was missing also had a similar finale. It’s a long forgotten movie – Ek Baar Chale Aao (1983).

Ek Baar Chale Aao (come just once please) starts with the unfortunate event of non-happening of marriage of the sister of Dharam Daas (Kulbhushan Kharbanda) because the groom, Deen Dayaal (Girish Karnaad) refuses to marry her because of non-payment of the agreed dowry amount by the bride’s family. Dharam Daas’ sister commits suicide and then their father, Naarayan Daas (Bharat Bhushan) dies of shock. Dharam Daas vows to avenge for this tragedy in his family. Years later, Dharam Daas’ son, Kamal (Farooq Sheikh) and Deen Dayaal’s daughter, Gulaab (Deepti Naval) happen to meet in college and fall in each other’s love. When Dharam Daas comes to know of it, he perceives it as a means to settle his decades old score with Deen Dayaal. First he agrees for the marriage but later disapproves it and leaves no stone unturned in separating the lovers and hurting Deen Dayaal by all means. For this purpose, he goes hell bent upon ruining the life of Gulaab. Then, in return, Deen Dayaal also takes a similar path to harm Kamal. The lovers run away from their enemies who are actually their kins only. They get unexpected support from Priya (Kajal Kiran) and Madan (Asrani). However while on the run, they ultimately realize that it’s not possible for them to get united against the will of their mighty enemies. And then they take one final decision to put an end to everything. Coincidentally, this location is the same where decades back Kamal’s aunt (father’s sister) had committed suicide. 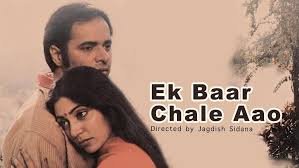 Ek Baar Chale Aao scores mainly because of the touching performance of the lead pair. The way Farooq Sheikh has been one of the most underrated actor of Hindi cinema, the same way Deepti Naval has been one of the most underrated actresses of the Indian screen. Despite belonging to the league of greats like Naseeruddin Shah, Shabana Aazmi, Smita Patil and Nana Patekar, these two never got their due in the real sense. But whenever they got an opportunity to showcase their talent, they shone like anything. This long forgotten movie is an illustration of this fact. They made one of the most lovely on-screen pair of the early eighties with admirable movies like Chashm-e-Baddoor, Katha and Saath Saath to their credit and their amazing chemistry is seen in Ek Baar Chale Aao also. They have risen above the script which is not great and created waves in the hearts of the viewers. Their love is appealing and real unlike the plastic and unreal love of the lead pair of Ishaqzaade. This love is innocent and completely untouched by the bitterness between their fathers (unlike that in Ishaqzaade). Their gullibility and innocence win your heart. You laugh with them. You weep with them. After the movie is over, you leave the screen with a heavy heart, a throbbing pain deep within and that’s the success of the narrator aptly supported by Farooq and Deepti. They have been christened as Kamal (lotus) and Gulaab (rose) in the movie which is perfect for their pair. The supporting cast has also done well.

Directed by Jagdish Sidana, this movie has been made in the style of a formula-based potboiler and the extra-ordinary impact that has come into existence is by default only. By default only, it has underscored the appalling consequences of the undesirable dowry custom. All things said and done, the movie is entertaining and the drama followed by romance followed by drama again maintains the interest of the viewer without a break. Due to the tradition in that time, a comedy track of Asrani is also there. The movie has a modest production value but technically it’s ok. Dialogs are good. The most pinching dialog is in the beginning sequence of the movie from the mouth of Deen Dayaal – Bina Dahej Ke Dulhan Vastraheen Hoti Hai (a bride without dowry is as good as naked) which is repeated later in the movie by Dharam Daas (when the proceedings of the marriage of Kamal and Gulaab have set in). It depicts the patriarchal set up of the Indian society making girls as vulnerable due to the unfortunate dowry custom.

Though the climaxes of Kamal Haasan-Rati Agnihotri starrer classic movie – Ek Duje Ke Liye (1981) and Aamir Khan-Juhi Chawla starrer another classic movie – Qayamat Se Qayamat Tak (1988) are also more or less similar, Ishaqzaade is much closer to Ek Baar Chale Aao then the abovementioned movies. The Hindu-Muslim or honour-killing angle is fictitious and illusionary in Ishaqzaade. Anybody who has seen Ek Baar Chale Aao can contrast the basic story idea as well as many scenes of Ishaqzaade with that. I am not saying that Ishaqzaade is a copy of Ek Baar Chale Aao. It’s not a copy but Habib Faisal seems to have taken inspiration from Ek Baar Chale Aao for the story idea of Ishaqzaade and then through a proper adaptation he might have written an apparently different script. The lead characters of Ek Baar Chale Aao are real ones whom we can identify as from among us only and relate to them whereas the lead characters of Ishaqzaade are definitely fictitious who are not seen in real life, whom we cannot relate to and even whose death does not create any stir in our hearts.

The music of this movie is good. Chand Pardesi has composed tunes for the lyrics penned by Anjaan, his son – Sameer and Mohammad Iqbal Khan. The best song is the title track which can be termed as an underrated song of Lata Mangeshkar. One song – Chirmi Babul Ki Laadli is a lift from an ages old Rajasthani folk song.

I recommend this movie for entertainment as well as for watching an eye-opener against the undesirable dowry custom still existing in the Indian society and above all, for the performance of Farooq and Deepti who had their own enormous fan-following during that period. This lovely pair appears as made for each other and if not for anything else, this movie is worth a watch for it.