The police is answerable to the public, mind you !

Police Public (1990) is murder mystery which I had seen when I was undergoing my C.A. course and was on tour to Ranchi (then in Bihar, now in Jharkhand) for the purpose of conducting some audits. While staying in the Kwality Inns hotel, I happened to watch this movie when the hotel management arranged its viewing by its guests on the T.V. sets of their rooms. I liked the movie because despite certain flaws, it’s entertaining. 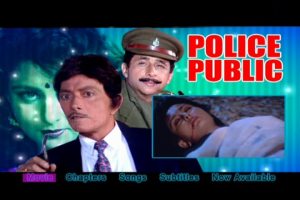 The plot of the movie is the mysterious death of Mrs. Karuna Sharma (Poonam Dhillon) who is the young daughter-in-law of a business family headed by Kishan Sharma (Prem Chopra) whose son – Arun (Raj Kiran) is the husband of the victim. Apparently Karuna has committed suicide by jumping from height but there are certain clues signalling that she has been murdered. The investigating police officer – Shahnawaaz Khan (Kabir Bedi) comes to know that Kishan Sharma had not taken any dowry from Karuna’s father – Ram Swaroop (A.K. Hangal) but later on, very cleverly, he usurped the land worth millions of rupees of Ram Swaroop. He also comes to know that Arun lives an extravagant and licentious life and Karuna was very unhappy in her marital life. As Shahnawaaz Khan goes deep into the facts of the case and is determined to solve the case, Kishan Sharma gets him transferred through his friend – Tiwari (Ajit Vachchhani) who is a petty politician. The new police officer of the area is a highly corrupt and licentious cop – Mahasingh Garhwaal (Nasiruddin Shah) who closes the file of the case after taking bribe from Sharma and threatens Ram Swaroop.

Aggrieved Ram Swaroop approaches the home minister of the state (Vinod Naagpaal) but finds that the home minister is also a part of the corrupt system only and in no mood to help him in getting justice. Now his second daughter (the younger sister of the victim) – Usha (Shikha Swaroop) and her beau – Shyam (Arbaaz Ali Khan) decide to make a last, desperate attempt at getting justice. They write letters to the chief justice of India, the prime minister of India and the president of India in this regard. The CJ considers their letter a writ and consequentially a CBI enquiry of this case is ordered. CBI officer Jagmohan Aazaad (Raaj Kumar) is assigned the job. How he reaches the bottom of the case, unmasks the murderer and ensures that the victim’s family gets justice forms the remaining part of the movie. In this exercise of his, he has to match wits with the corrupt cop – Mahasingh Garhwaal and his accomplices too. A change of heart takes place with Mahasingh and he also comes to the side of justice, leaving his corrupt avatar behind.

The USP of this movie is the stylish performance of Raaj Kumar whose gimmicks have always been popular since the days of Waqt (1965). None could (and can) match his theatrical dialog delivery and that’s why special kind of dialogs used to be written for him to produce clapping in the cinema hall. Police Public is a movie in this line only. This regular murder mystery has become special due to Raaj Kumar only and it gained average success on the box office perhaps due to the immense popularity enjoyed by him in a section of the audience. Else there’s nothing great about the movie as far as the murder mystery is concerned. The real murderer is brought before the audience in the fashion of drawing a rabbit out of a hat by a magician which does not make a satisfactory solution to the mystery.

More than the mystery, the movie scores on the front of exposing the corrupt character of the Indian police and underscoring the fact that the police should not think that it enjoys unrestrained authority. It is answerable. Answerable to the public which is considered as supreme in the constitution of the nation. Police is the servant of the masses and not their master. Just because the corrupt politicians are backing them, the corrupt cops should not feel that they are never going to be nailed for the defiance of their duty and their wrongdoings. Mahasingh Garhwaal (Nasiruddin Shah) comes to understand it and mend his ways. The movie declares it loud and clear that the public should recognize its strength and should not bow before corruption and wicked powers. The message is clear – don’t lose heart by initial failure in getting justice, keep on raising your voice, it will definitely reach some appropriate ear if you persist.

Raaj Kumar as Jagmohan Aazaad is the heart and soul of this movie. Though his acting is not natural, it’s theatrical and over the top but this is what his admirers expect from him. Special dialogues have been written for him and he has poured life into various scenes through them. The second best performer is undoubtedly Nasiruddin Shah, the corrupt cop who finally reforms himself. The joint scenes of these two stalwarts of Hindi cinema in the movie light up the screen, adding value to the narrative and increasing the entertainment quotient of the movie. All others are perfectly placed in their respective roles. Rakesh Bedi and Harish Patel have generated laughs for the audience. If you are able to identify Reema Lagoo in this movie, you will be surprised to see her in an utterly different (negative) role than what she has generally done in her career.

This is the debut movie of Shikha Swaroop who had won the Miss India title in 1988 and who later gained popularity by playing the title role in the TV serial Chandrakaanta which was made by Neeraja Guleri and aired on Doordarshan. She looks quite beautiful and has done well too.

Music composed by Raamlaxman is overall average. Only one song of the album can be considered as good – Main Jis Din Bhula Doon Tera Pyar Dil Se, Woh Din Aakhiri Ho Meri Zindagi Ka which has been penned by Asad Bhopali and sung by Lata Mangeshkar and Amit Kumar.

Technically the movie is up to the mark. The murder takes place in a rainy night and the movie opens with the same on one hand and an item song on the other. The momentum of the story has been maintained very well and there is no boredom. The movie is not unduly long.

I recommend Police Public as a nice one time watch to the regular movie buffs in general and the fans of Raaj Kumar in particular.

2 Responses to The police is answerable to the public, mind you !