A gentleman and a loafer ! Both at the same time ?

Shareef Budmaash (1973) is a crime-thriller directed by skilled director Raj Khosla, starring Dev Anand and Hema Malini in lead roles. Dev Anand himself has produced it under his banner Navketan. It’s an entertaining movie whose title fascinated me because once upon a time someone special used to call me lovingly Shareef Badmaash (gentleman loafer) only. I was Shareef to her because she had seen many virtues and pluses in me and one thing that had touched her that I respected her a lot (and got her respect in return). And why I was Badmaash to her, is something that I may not be willing to clarify here but the love-birds must be able to understand it even without anybody’s clarifying.

Shareef Badmaash starts with the development of a new design of a sophisticated super aircraft by two Indian scientists after putting in their hard work for a decade. For the sake of the security of their new invention which is a confidential information, they destroy their research papers after preserving the complete blueprint in a microfilm. As this news gets spread in the underworld, many baddies become aspirants to get it which is worth crores of rupees if sold to the foreign powers.

The microfilm containing the design of the aircraft reaches an outlaw who is apparently a highly respected person in the society – Deewaan (Jeevan) when he gets these two scientists killed by his henchman (Mac Mohan) and usurps the microfilm. He keeps it in his safe containing a number-lock but his safe gets burgled by his confidant Ajit (Sudhir) only the same night who loots it for the sake of the precious jewellery worth lakhs of rupees kept in the safe but takes away the microfilm also alongwith them which Deewaan has very cleverly hid in a briefcase. Upon Deewaan’s complaint to the police (quite understandably his complaint covers the theft of the jewellery only without any mention of the microfilm), Ajit is arrested by the police and then sent to jail but the stolen stuff is not found with him.

Now Deewaan and many other criminals who are in quest of the microfilm (and also the jewellery), want to get Ajit released from jail and then hog the stolen stuff from him. For this purpose, they need a daredevil person capable of doing it. The name of a seasoned criminal Rocky comes to the fore in this regard. In the eyes of the law, Rocky is dead but the underworld players come to know that he is alive and now lives by wearing a different identity of Sust-Raam (Dev Anand). Now all the criminals try to lure him to get this job done by him for their sake. After initial reluctance, our hero Sust-Raam whose real name is Ramesh, decides to do it for Deewaan only whose offer is the biggest one.

To get Ajit released from jail, he ascertains all the relevant information the most important piece of which is that a cabaret dancer Seema (Hema Malini) is the girlfriend of the jailor. Now starts the interaction of the hero with Seema, the heroine of this movie. The narrative meanders through romance, songs, comedy, twists in the tale and surprises for the characters as well as for the audience till the climax arrives and finally the nation’s asset, i.e., the microfilm reaches its correct destination. 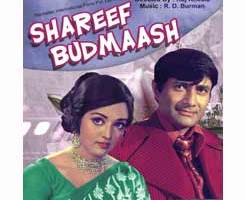 Shareef Badmaash is a formulaic movie, a typical potboiler of the seventies. However, as asserted above, it is an entertaining movie, keeping the viewer engaged from the beginning to the climax. We know that our hero cannot be a criminal. He appears to be a ruffian (Badmaash) but actually being a Hindi movie hero (in that era), he is bound to be a straight and law abiding citizen (Shareef) only. Hence the truth of Rocky’s identity must be hidden only to be known in the climax. The heroine’s character is also mysterious for a major part of the movie. Well, to enjoy the Bollywood movies of the seventies, we have to watch them with a proper mindset and we should not contrast them with the contemporary cinema. Despite predictability of the final outcome, the curiosity of how the things take shape and turn out with the progress of the movie, keeps the viewer glued to the screen. Seasoned director Raj Khosla has kept the script completely under his control and not allowed it to go out of hand anywhere.

Dev Anand and Hema Malini always made a lovely pair despite the age difference between the two (of about quarter of a century). Mannerismic Dev and dream girl Hema always shared good on-screen chemistry between them and hence were always able to successfully pull together despite the routine scripts written for them. Shareef Badmaash is no exception. Dev Anand has delivered a stylish performance in the lead role despite his advancing years (he’s in his fifties). Hema is extremely charming. All others including the ever gorgeous Helen, are fit in their respective roles. The best among the baddies is undoubtedly Ajit, the stylish villain of the seventies. Shatrughan Sinha is also there in a cameo.

Technically, this movie is okay with the length also being not much though lengthier movies used to be made in that period. The story flows well without any boredom anywhere. R.D. Burman’s music with songs in the voices of Lata Mangeshkar, Asha Bhosle and Kishore Kumar is good. Asha-Kishore duet Neend Churaake Raaton Mein is the best song in my opinion. 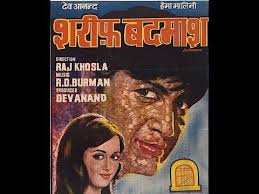 Summing up, Shareef Badmaash is a nice timepass from the Bollywood of the seventies. Watch it to get an entertainment of two hours and odd minutes and meet Indian Gregory Peck – Dev Anand who is a gentleman (Shareef) and a ruffian (Badmaash), both at the same time.

4 Responses to A gentleman and a loafer ! Both at the same time ?