A dismissed cop turns into an undercover agent

Posted on February 2, 2018 by Jitendra Mathur

Last year I had posted the review of Surendra Mohan Pathak’s novel – Gawaahi which is undoubtedly a brilliant thriller. Mr. Pathak has written its sequel also titled as Secret Agent whose review I am presenting now.

In Gawaahi (testimony), there are two cop brothers posted in Mumbai – Neelesh Gokhle and Rajesh Gokhle, Rajesh being the straight cop and Neelesh, the elder of the two, being the corrupt cop. When Rajesh becomes eye-witness to a gang-killing and is determined to give testimony against the murderer, the gangsters approach Neelesh to stop him. Though Rajesh does not have good relationship with his elder brother because of difference of character and line of thinking and lives separately, Neelesh loves him very much. When the gangsters ditch Neelesh and kill Rajesh, Neelesh is transformed from within and he carries the gangsters to their proper destination. However he is dismissed from the police service in the end.

Secret Agent starts by picking up the story thread from the end of Gawaahi. Neelesh now works as a security officer in a bar to make a living. He is approached by the top brass of the police force to become its undercover agent on an island called Conacona  which comes under the jurisdiction of Murud and it is known that several illegal activities are going there under the stewardship of a trio – Francis Magnaro, a Goa-ni gangster; Baburao Mokashi, the president of the local municipality and Anil Mahabole, a highly corrupt, high-handed and licentious cop who is the in-charge of the local police station. An offer is put up to Neelesh that if he helps the police force in setting the law and order right on the island by playing the role of its undercover agent, he will be taken back into the police force on his last designation (inspector) with full dignity and honour. Since Neelesh’s Late younger brother, i.e., Rajesh always sought the guidance of a holy man – Acharya Ji in the matters of life, now Neelesh also seeks his guidance because it’s not going to be a cakewalk for the him, it’s definitely going to be a matter of life and death. Acharya Ji was very close to the late father of both these brothers and out of that relationship only, he has always been concerned for their welfare. He advises Neelesh to accept the offer and wash the stigma of being an erstwhile corrupt cop from his name. Accordingly, Neelesh accepts the offer and reaches Conacona island. He starts working in a night club known as Consica Club as a general handyman. How he is able to complete his assignment and regains his lost police job and honour, is the remaining part of the story. He has been a widower for years and during this assignment, he gets his soulmate too in the form of Shyamla, the daughter of Baburao Mokashi. 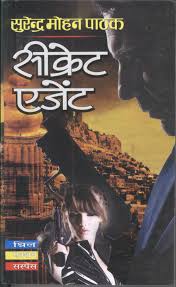 Secret Agent is a very fast, engrossing thriller which does not contain any suspense because the villains are well-known and we know that our hero is going to triumph in the end, just like the typical Indian masaala movies. However the lack of suspense does not dilute the curiosity factor embedded in the narrative and the reader goes on reading chapter after chapter, wondering as to what next. Since the story is to be linked to its prequel, the storyline takes a few pages to pick-up speed but once the hero is active on his assignment, the author has not allowed any laxity to creep in the narrative which runs fast towards the desired finale. The climax is breathtaking. The sea-storm that arrives in the climax can be contrasted to the storm in the lives of the principal characters too. The ending scene is romantic as well as sentimental in which the agony of the hero who has been suffering from guilt-complex for long, subsides through the new, positive developments in his life.

Secret Agent can be termed as a sentimental thriller. The hero, Neelesh Gokhle’s heart is just like a burning pyre and he badly needs its extinction to live the life like a normal human-being. The author has very skilfully etched out his character which is able to win the hearts of the readers even before the story reaches its conclusion. He is the heart and soul of the whole story and the transformation of his character post his honest brother’s death (in this novel’s prequel – Gawaahi) can be compared to that of Maharshi Vaalmeeki who is said to have transformed from a bandit to a great saint who went ahead to write the epic – Raamayan.

In the beginning itself, we come across the sacred talks of Acharya Ji which are just like gems in the form of words. That small chapter which propels the story on its main track is an eye-opener for any reader. The words of wisdom of Acharya Ji can be adopted by us in our lives for our own good.

The seasoned author has brought his vast experience into the writing of this novel and detailed the functioning of the police system in India in a highly authentic manner. The author has watched the working of Indian police from close and hence in most of his novels, the cops and their acts are quite realistic and believable. How the aspect of the jurisdiction of a police station as well as the senior police officers comes into picture whenever there is a tussle between the law-enforcers and the law-breakers and how the corrupt cops disobey their seniors and even behave quite arrogantly with them, has been portrayed with utmost realism. Yes, the Indian police system works this way only and that’s why the crime is on rise and the criminals are getting more and more fearless.

Other than Neelesh, the characters of Baburao Mokashi, Shyamla, Anil Mahabole, Francis Magnaro, his sidekick – Ronny D’ Souza, Neelesh’s employer on the island – Gopal Pujara, Romila Saawant, a bar-girl who gets murdered by Anil Mahabole, Hawaldaar Jagan Khatri who works under Anil Mahabole, Dayaraam Bhaate who is a constable in the same police station, Mrs. Walson who is an elderly lady running a boarding house for the working girls on the island and finally, the supercops of Mumbai and Murud police force all are able to make their presence felt in the novel though their status is that of just like the supporting characters in a movie. However everyone of them comes from the real world and none appears to be an imaginary one.

The language is free-flowing and in addition to the sacred talks of Acharya Ji, the other dialogues of different characters are also impressive. After the initial two chapters, the narrative moves like a swift water stream which knows very well where its destination is and the reader flows alongwith that. Its prequel, i.e., Gawaahi had started with Prakkathan (preface) where this novel, the sequel, concludes with Upsanhaar (epilogue).

Swami Vivekananda wanted his countrymen to have muscles of iron and nerves of steel and he has asserted – ‘Take up one idea. Make that one idea your life – think of it, dream of it, live on that idea. Let the brain, muscles, nerves, every part of your body, be full of that idea, and just leave every other idea alone. This is the way to success.’ Neelesh Gokhle, ex-inspector, Mumbai police follows it to the core in Secret Agent. We also can follow suit.

2 Responses to A dismissed cop turns into an undercover agent