The Lone Crusader Against Corruption in India

Corruption is the termite in the Indian system which has hollowed the Indian progress, growth and development and sent justice into coma. Ex-Indian premier Rajiv Gandhi had frankly asserted that out of every one rupee sent by the government for the people, barely a sum of 15 paisa reaches those whom it’s meant for. He had asserted it more than three decades back and since then the situation has only worsened in our ‘great’ country, not improved. Now the thing is that almost everybody has accepted corruption as a part of life. It has become an etiquette in the corridors of the power and authority, not only in the public sector but also in the private sector (believe it or not, it’s true). The situation has reached such an alarming point that a few years back, a minister in the government of UP openly (and shamelessly) asserted that if corruption is limited to the status of salt in the dish, say upto 10%, it’s tolerable. The corrupt are not being seen as undesirable ones, instead they are respected because of the wealth they accumulate through their corrupt activities. Producer and actor Kamal Haasan dealt with this burning issue in his movie Hindustani (1996) which was originally made in Tamil as Indian (and also released in Telugu under the title – Bharatheeyudu).

Hindustani (Indian) is the story of an aged Indian freedom fighter – Senapati (Kamal Haasan) who has shed his perspiration and blood for the motherland during the struggle fro freedom from the British rule, remained a soldier in the Indian National Army led by Netaji Subhash Chandra Bose and married a girl (Sukanya) by saving her honour. Now in free India, he is peacefully living with his daughter (Kasturi) and son (Kamal Haasan’s double role). The thing which changed the course of his life is the corruption rampant in the Indian system of governance. His daughter passed away for want of medical aid because he refused to pay bribes to the doctors, the cops and the people holding chairs in the system and not ready to move a finger till their pockets are warmed. The loss of his beloved daughter got followed up by the separation of his son named as Chandru who feels that his father is sticking to his ‘outdated’  ideals and not molding with time and that only resulted in the death of his beloved sister.

Chandru becomes a corrupt person by all means and grabs a creamy (from corruption viewpoint) job in the Regional Transport Office, warming his pocket through bribes. On the other hand, Senapati gets a mission for the remaining part of his life. And that mission is a crusade against the corrupt who rule the roost in India, rendering agony and injustice to the innocent commoners every day, every hour, every minute. Now the lone crusader Senapati starts ruthlessly killing the corrupt government servants and thus sending a message far and wide that any corrupt government servant won’t be able to survive his attack. This mysterious killer is now trailed by a dedicated cop (Nedumudi Venu). Chandru amidst his romances with Aishwarya (Manisha Koirala) and Sapna (Urmila Matondkar) is going ahead with his corruption-soaked life till a lethal accident takes place leading to death of many children. Now Senapati comes to know that his own blood is no better than the other corrupt people drawing the blood of the masses in every nook and corner of India. Can he spare Chandru just because he is his son ?

Hindustani is a movie whose story comes straight from the heart of a person who has devoted his heart and soul to his motherland but found that post-independence, all the ideals and values that he had fought for, have been thrown by his countrymen into the Indian Ocean. No regard is left for truth, no regard for justice, no regard for honesty, no regard for humanity and sensitivity. Greed for corrupt wealth has turned the Indians into stone-hearted fellows for whom money supersedes over everything noble, just and human. The Indian offices are studded by parasites more, human-beings less. And the collusion of the corrupt reigns from the bottom of the hierarchy to the top of it. Freedom fighters leave for their heavenly abodes one after another as their age takes over them. And the surviving ones keep on weeping at the abasement of the nation and more so of the people those populate it. We did not fight for the freedom of our motherland and hence the pinch is felt relatively less by us, we get used to the corruption and degeneration of values and adjust with the same. But how can a person soaked in the ideals of patriotism and truthfulness tolerate it and if he can, to which extent ? And thus the freedom-fighter of this story raises arm to launch another freedom struggle in which the adversaries are his compatriots only.

I was born in politically independent India, a century after the birth of Mahatma Gandhi but I wish I were born a few decades earlier and fought for the freedom of the motherland. What an aura it must have been with patriotism and ideals being the norm of the day ! The filmmaker has shown corruption only in the government sector but it is no less in the private sector as well. In fact, it has gone into our nerves, our bloodstream and hence we have accepted it as a part of life, an inseparable part, unfortunately. Seeing corruption everywhere with truth, justice and honesty being mocked by the ‘practical’  folks, my heart weeps for my nation the same way the heart of the septuagenarian Senapati of Hindustani weeps. I feel, his killing the corrupt is completely justified because, quite unfortunately, such a time has come when you cannot compel the people to behave, you can only compel them not to misbehave. And that is possible only by inculcating fear in them who are treading the wrong path.

Director Shankar has directed his own story very well but only to the extent it shows Senapati (both young and old) and his activities. When it comes to the activities of Senapati’s young son Chandru, the movie appears to be no better than a regular Masala movie made in India. Songs, dances, romance, comedy; everything is unnecessarily imposed on the main story which is sensible and sensitive. It’s a digression from the main track which could have been and should have been avoided. Either you make a hard-hitting movie or you make a Masaala entertainer. When you make a two-in-one of them, you do nothing but dilute the quality of your product, reducing it from excellent to good. And that’s where the director – Shankar has disappointed. 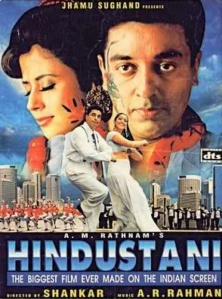 The story flows very well but for the digressions due to the heroines and their respective romantic tracks. The comedy of Senthil is over the top and reminds of the comedy shown in routine Bollywood potboilers. The main track is damn interesting and keeps the viewer hooked. It portrays the shameless corruption in the Indian offices with utmost realism. The track of Aruna Irani is heart-rending and able to bring tears to any sensitive viewer. Had the director (and the filmmaker – Kamal Haasan) avoided the temptation of inserting regular Bollywood formulas in this movie, the added advantage would have been to present a taut movie of shorter length. This movie is, quite unnecessarily, very long. It’s technically superior though. 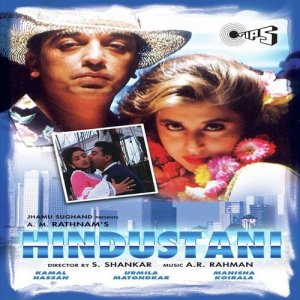 Performance wise talking, Kamal Haasan takes the cake. He has done an excellent job especially as the old Senapati and quite sensibly has donned the wrinkled face to bring perfection to the persona being presented on the screen. He has done well as the young son of also but the image that remains in the heart after the movie is that of the aged father only, the lone crusader against corruption.

The heroines had nothing much to do. However they have played their parts well, especially Manisha Koirala is lovable as the animal-loving, kind-hearted Aishwarya. The complete supporting cast is well in place including Sukanya as Senapati’s wife and Nedumudi Venu as the committed cop who trails the killer.

A.R. Rehman’s music is good. However most of the songs only block the flow of the story and irritate.

With my highest regards to the fictional Senapati of this movie, I vow to support every such person who undertakes such a mission to eliminate the corrupt. However at the same time, I also underscore that killing eliminates the corrupt individual and not the corrupt mentality which has spread across the length and width of our country like poison dissolved in a pond. The permanent and long lasting solution is something else – inculcate moral values and ethics in our young ones and go for character building of the generation next.

6 Responses to The Lone Crusader Against Corruption in India