I sincerely thank esteemed reviewer and blogger Deepa Swaminathan for inspiring me to watch this movie in just one go (earlier I had watched certain pieces of it on the small screen) and then review it. Being one of the zillions of Rajnikant fans, I am quite happy to have watched this entertaining flick and now penning its review.

There is nothing new in the story of Sivaji The Boss (2007). It’s the ages old tussle between good and evil being given the shape of the honest and sincere hero’s being pitted against the corrupt system in Mera Bhaarat Mahaan. But this hackneyed story contains a lot of entertainment for the audience and in the end, this is what matters the most.

Our software professional hero Sivaji (Rajnikant) who happens to come from a modest background, earns around Rs. 150 crores by working in the USA and then returns to India to serve his country by providing free education and treatment to the underprivileged through his charitable institution called Sivaji Foundation. However there’s a villain (Suman) in the way who considers his activities a threat to his money-making machinery. Alongwith him, the corrupt political and bureaucratic system prevailing in our country becomes a major problem for our hero who meanwhile has to set right his love life also.

Finally, our hero loses the legal battle also which is completely in favour of might and not what’s right. He is on the road now having lost all his wealth. Then his heart (and his fate) shows him the way to leave the garb of a simple, sincere and law-abiding Sivaji and move into the persona of Boss, the boss of all those who are on the wrong side. How he turns the tables on them and puts his dream of serving his country into reality is the stuff of the post-interval session of the movie.

Quite some time back, Vidya Baalan had asserted for one movie of hers that it contained only three things – Entertainment, Entertainment and Entertainment. Well, she only must be knowing better what’s the significance of uttering the same word thrice when one would have sufficed. Following the same line, Rajnikant can assert this word hundreds of times for this movie (or any similar movie done by him). Forget logic. Just allow yourself to be entertained by the time-tested masaalas poured into the movie. And then here’s Rajnikant, the boss of the box office who won’t disappoint you in terms of entertainment at least. 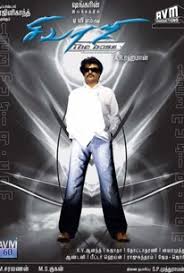 I am not going to ask the script-writer and the director (Shankar) as to how our hero is able to convert whooping sums of black money into white money through his money-laundering act controlled from the USA, something which went above my head. If only getting better of the baddies and snatching their moneys were so easy ! But then please note that here’s not a commoner assigned with this job. It’s Rajni, the Boss capable of doing all those things which lesser mortals can’t do. And it’s needless to discuss the fight and action sequences specially designed for him.

The highly illogical script in which doses of romance and comedy do nothing but block the flow of the narrative, quite unfortunately, supports the superstitious mentality of the Indians through the activities of the heroine who’s first the betrothed of the hero and then the wife. She believes the talks of a soothsayer regarding her matrimonial alliance with the hero and acts upon them which ultimately lands our hero into jail. Well, our hero has no complaints because he knows that whatever his lady-love is doing is for the sake of saving his life only (from an imaginary danger). And when he has no complaints, why should we ?

Around one and a half decade back, I saw Rajnikant’s style of smoking cigar in a Hindi movie – Bulandi (2000) and then I started smoking cigar in his style only because I simply loved that. Now being conscious of the health of his admirers, Rajnikant has stopped smoking and started chewing gums. That’s also lovable. In fact, whatever Rajni Sir does, is capable of keeping the audience enchanted in the hall. Always maintaining his image of a common man’s hero while balancing it with his larger-than-life persona, Rajni Sir has conquered countless hearts for a lifetime. He appears to be the director’s actor. Hence if he is over the top, the director (and his image in public psyche as well) is only to blame.

Shriya Saran has done nothing but filled the quota of a heroine which is a must because the hero has to romance also according to the prevailing norms of Indian cinema. Among others, Suman as the villain and Vivek as the comedian maternal uncle of the hero have done satisfactorily.

The movie is way too long and the songs and dances (plus the rom-com sequences) forced into the narrative are responsible for it. Technically, the movie is just okay. Ditto for the music of A.R. Rehman.

Sivaji The Boss is the successful fight of a commoner against the corrupt system but the fighter is not exactly a commoner like me or you or any other similar spectator of this movie. This fighter is Rajnikant, the extra-ordinary. He is larger than life which we, unfortunately, aren’t and can’t. Hence the hero of the story wins his individual fight in the reel life but the cruel Indian system continues to throttle the real ones in the real life.

A Chartered Accountant with literary passion and a fondness for fine arts
View all posts by Jitendra Mathur →
This entry was posted in Movie Review and tagged director Shankar, Movie Review - Sivaji The Boss (2007), Rajnikant, Shriya Saran. Bookmark the permalink.