Well done Benegal Saheb ! But only half the way.

The English word WELL has two meanings – one is good or fine and the other one is the cylindrical shaped excavation in the soil for getting underground water for drinking purposes. Well Done Abba (2010) refers to both the meanings in its title and while showing the movie’s name on the screen, the word WELL is written on the picture of a well (second meaning) itself. 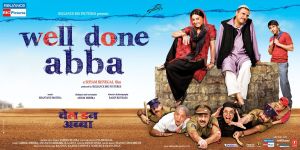 As another word – ABBA in the title suggests, this movie is the story of a Muslim gentleman and his daughter. Arman Ali, working as a driver in Mumbai, visits his village Chikatpally in Andhra Pradesh to arrange his daughter – Muskan’s marriage who lives with his twin brother – Rehman Ali and his wife. The water problem in the village prompts him to take the benefit of the govt.’s scheme in which financial assistance is provided to the people living below poverty line (BPL) for making BAAWARIs or the in-house wells for fulfilment of domestic drinking water needs. Undergoing a long chain of corruption in the system, the originally naive and clean-hearted Arman Ali gets frustrated to find that the major chunk of the govt. assistance has been stomached by the corrupt officials and allieds, leaving him with a Baawari on paper only. His witty daughter shows him the way to get the better of the system by using the system itself and ultimately they succeed in attaining their objective. In their campaign, an automobile mechanic, Arif, becomes their comrade in the fight against the system (who gets Muskan’s hand also when Arman Ali makes him his son-in-law, realizing the love of his daughter and him). 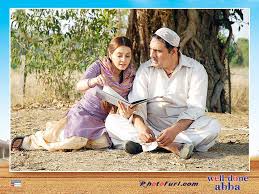 Old war-horse – Shyam Benegal who has given Hindi cinema gems like Ankur, Nishant, Mandi, Sardari Begum and Zubeida, was back with a bang with Welcome to Sajjanpur (2008), blending his art work with commercial elements. He has treaded the same path in Well Done Abba too. Perhaps, after spending more than four and a half decades in film industry, he has realized that box office success should accompany critical acclaim for saving the art from perishing. He has repeated the support cast of his earlier ventures in this film too and the entire film which is a combined adaptation of three Indian stories – Narsaiyyan Ki Baawari, Phulwa Ka Pul and Still Waters (and perhaps a fourth long-forgotten and hence uncredited one too – Chori Naye Makaan Ki) has a clear stamp of the filmmaker’s name upon it.

The first half of the movie is thoroughly gripping and very real in which the director has shown the dirt of the Indian govt. system and work culture in which the money entitled by the common man is swallowed by the corrupt establishment in unison with the contractors, photographers etc. But the second half, showing the fight of Arman Ali in order to get his Baawari for real and not just on paper, is damn unreal. To suit his cinematic objective, the director has not shown the policewallas as corrupt whereas it is difficult to digest that the policemen are not corrupt whereas the complete establishment which they are associated with, is full of corrupt people only. Had Mr. Benegal shown the policemen also corrupt, his story would not have even taken off post interval. The events shown in the movie after the interval are artificial (and boring too). Perhaps to consume the 16 reels and 135 minutes time of the movie, the director has gone for the romantic angle also and quite superfluously imposed a marriage song in the concluding minutes of the movie which irritates the viewer. The several love-making scenes of the engineer and his wife uselessly forced in the narrative, too give a bad taste.

However, the overall impact of the movie is very good upon the audience. Myself, being a villager by birth and presently living at Hyderabad, is very glad to see the lively and realistic portrayal of village life coupled with the utterly human depiction of the lower middle class Muslim families in Andhra Pradesh, their pains and hopes, their tears and smiles; all so natural that a viewer familiar with these things, gets a feel of 3-D effect. Even the language used by the characters is Hyderabadi Hindi which is actually spoken by the Hyderabadi Muslims.

The storyteller has effectively and vividly made satirical comments upon the so-called empowerment of women through Panchayati Raj (local bodies) in India by showing that their chauvinistic husbands not only grab and misuse their constitutional power and position but also humiliate them, making them feel time and again that they (women) are no better than a footwear for them (men). 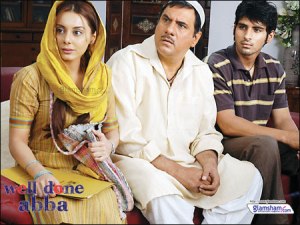 Boman Irani was first noticed in Munnabhai MBBS in December 2003 by the Indian Hindi movie audience and since then he is known to all and sundry, taking interest in this entertainment line. His acting touches new horizons in every succeeding movie and Well Done Abba is no exception. This time, in a double role, he has done an outstanding job. He is in the lead role this time and proves that he is dependable. Today’s birthday babe – Minissha Lamba has proved in the role of his daughter that she can be up to the mark when given a meaty role. Sameer Dattani as Arif is lovable. The complete support cast who can justifiably be termed as Mr. Benegal’s team, has given excellent support to the leading father-daughter duo. However wasting a talented actress like Sonali Kulkarni in an insignificant and ridiculous role, is an aberration on the part of the director.

The complete background music is nothing but the Indian folk music and gives a soothing experience when blended with the relevant scenes on the screen. The composition of the songs as well as the lyrics, both are pretty good. Cinematography, costumes and art direction are par excellence. Editor’s laxity, though, has made the movie lengthier by 10-15 minutes. Though the Baawari Ratna award ceremony scene just before the end of the movie, makes the audience laugh, the other 10-15 minutes’ footage prior to end, is quite superfluous.

Benegal Saheb has changed himself with the changing times and that’s why he now tries to entertain the audience too while giving them his intended message through the movie. But this exercise of this legendary filmmaker has made his recent products real in parts only, following Raj Kapoor’s proclamation in Mera Naam Joker (1970) – Kehta Hai Joker, Saara Zamaana, Aadhi Haqeeqat, Aadha Fasaana (The whole world is half the reality and half the fiction).

Despite flaws, this movie deserves a watch. That’s my final verdict.

2 Responses to Well done Benegal Saheb ! But only half the way.