Let your life not be sans any aim

I sincerely thank my dear friend, Sharad Shrivastav Ji for inspiring me to write this review. Lakshya (2004) is the second directorial venture of the young and talented director Farhan Akhtar starring Hrithik Roshan and Preity Zinta in lead roles.

Lakshya (aim) is the exemplary story of a carefree as well as careless youth, Karan Shergill (Hrithik Roshan) who is in love with Romila Dutta (Preity Zinta) but she finds it difficult to spend her life with a person like Karan who does not have any aim (LAKSHYA) in his life and happy to spend a lazy life on the strength of the money earned by his father. On the contrary, Romila has an aim for herself – to become a successful news-channel correspondent. Karan does not take the things seriously and joins the army casually only to run away from the Indian Military Academy within a few days due to the hard training and strict discipline there. But once he realizes that an aimless life is not worthwhile and his way of life needs to be changed for the better, he rejoins the army and gets an aim during the Kargil war of 1999. He successfully accomplishes his aim and being an Indian hero, gets the love of his life, i.e., Romila too.

Several years prior to the making of Lakshya, a similar incident had happened in a friendly family of myself when the young boy (a child of 10-11 years) was sent to the Military School by his parents and within a month, he ran away from there and came back to his house because the tender boy could not bear the strict discipline of that school. However since the boy was my student ( I had taught Maths to him while he was preparing for the entrance exam.), I was respected by him and his family and had a say in the matters of that house. I advised the boy’s parents to keep patience for some time and resend him to the Military School after a few years. They did the same and this time, it clicked. The boy had his education from the Military School, successfully cleared the NDA exam. and joined the armed force. Right now, he is an army officer. The story of Lakshya though different from this real life episode, reminded me of that boy whom I am proud of in the capacity of a Guru. 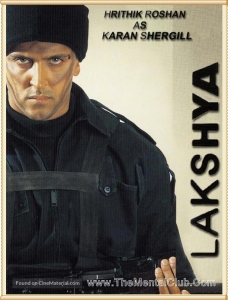 The message of Lakshya is pretty clear and exemplary for one and all. Though it’s established now that our lives are without aims from the side of Nature (or Almighty), it’s in our own interest to have some aim for us. The aim should be a positive one (and not something unlawful) which will provide a direction to our life and activities. There has to be a vision for our life sans which the life may be like a rudderless vessel drifting on the waters at the mercy of the waves and tides. Setting a goal makes the life of the concerned person meaningful. Thereafter the life is lived and not spent. And setting a goal does not mean just earning a living (as most of the Indians understand and follow). It’s much more. It helps us in growing-up and understanding ourselves. Finally, each one of us has to die some day. At that moment, there should be a satisfaction that a life has been well-lived and something worthwhile has been done. Then the death will also be peaceful and meaningful.

A country like ours which is studded with youth power, requires youths moving ahead with one or the other productive aim in their sight, one or the other pleasant dream in their eyes. That dream fills colour in the sketch of the individual’s life. After his maiden venture – Dil Chaahta Hai (2001), Lakshya came as the second venture of director Farhan Akhtar who is the son of the legendary script-writer and Shaayar, Javed Akhtar. Since Dil Chaahta Hai was a box office hit and critically acclaimed too, comparisons with that were natural. And Lakshya, despite being a good movie made on a good theme, could not live up to the expectations. The subject has been handled dryly and despite the hero’s final triumph in the war (capturing point no. 5179), the director could not convince the audience at large. The big question remains in the end whether winning one strategic point in the war fulfilled the objective of the movie. Should there not be a larger aim in life ? Further, I don’t think anybody can join, leave and then rejoin the Military Academy so easily as shown in the movie.

The on-screen chemistry of the hero and the heroine as well as their relationship in the story could not be exasperated to the optimum. Despite casting stalwarts like Amitabh Bachchan, Om Puri, Amrish Puri and Boman Irani; the director could not tap their potential and they were reduced to supporting actors in insignificant roles. The movie is good in patches only, nevertheless it has the flavour of an idealistic movie and deserves admiration. Unlike DCH, the entertainment value of Lakshya is low.

Though the chemistry between Hrithik Roshan and Preity Zinta has not been developed properly on the screen, both of them have delivered power-packed performances individually. Hrithik has demostrated once again that given a good role, he is unmatchable. And Preity who has been given the get-up of the ace journo Barkha Dutt, has also done her part pretty well. As said earlier, many talented actors have been wasted in supporting roles but nobody has disappointed through his acting. 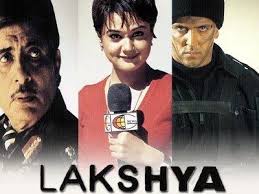 Technically the movie is good but considering the gravity of the Kargil war episode, the work should have been better. Action and thrills are just okay. Length is also not too much. Dialogues are neither great, nor bad. Shankar-Ehsaan-Loy could not create the Dil Chaahta Hai magic in their musical score. However Main Aisa Kyon Hoon, Kaandhon Se Milte Hain Kaandhe, Agar Main Kahoon, Kitni Baatein Yaad Aati Hain etc. are according to the mood of the movie. Background score is also in order.

All in all, Lakshya though not a great movie, is laudable due to its subject matter and certain plus points. Let’s have some aim. Let’s have some dream. Let’s make our lives meaningful. Everyone may not be fortunate enough to have his cherished dream fulfilled but as Ajay Devgan (as the martyr Captain Manoj Pandey) says to his superior officer in LOC-Kargil (2003) – ‘Some goals are so worthy that it’s glorious even to fail‘.

So true ! Hit or miss, the LAKSHYA should be worth aiming at.

4 Responses to Let your life not be sans any aim