Somewhere I have asserted that simpletons win hearts due to their innocence and purity of their own hearts. But the harsh truth of this cruel world is that simpletons lag behind in the race of life due to ditto traits of themselves. To win in the different races of life and get better of the opponents, a person has to shed the tag of being a simpleton and acquire the tag of being smart. Smartness counts everywhere, even in love. And that’s the message of this comedy of the seventies. I had heard a lot about this movie – Chhoti Si Baat (1975) but not watched it until I was inspired by my friend and esteemed reviewer and blogger Deepa Swaminathan  to first watch and then review it. I am grateful to her for leading me to watch this simple, yet wonderful movie. 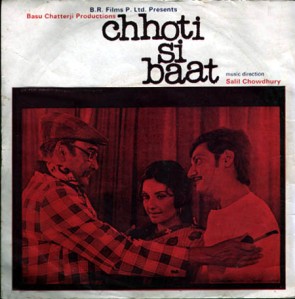 Chhoti Si Baat (trivial thing) is the story of a shy accountant – Arun (Amol Palekar) who is not smart and just too simple to find things his way. In the office of his company, his subordinates do not listen to him. His boss is not very happy with him. In his colourless life, his fascination towards Prabha (Vidya Sinha) is the only thing which enthuse him. She works in a neighbouring office (in Mumbai) and Arun loves her in his heart, seeing and deliberately coming across her in the most mundane situations of life. However his shyness and simplicity blocks his path whenever he has to express his feelings to her. Prabha knows it and discusses these things with her colleague, Deepa (Nandita Thakur). The shy and hesitant advances of the boy are a source of fun for Prabha. She likes him and wants him to express himself. Now comes the twist in the tale.

Arun faces a rival for Prabha’s companionship and love in the form of Naagesh (Asrani) who is oversmart and more resourceful than Arun and now, our hero, i.e., Arun is struck by the fear of losing the bet called Prabha to Naagesh. The competition with annoying and irritating Naagesh, compels him to commit some silly errors and get cheated by a motor workshop owner. Finally, he takes a month long leave from his office and moves to Khandala where Col. JNW Singh (Ashok Kumar) lives whom he expects to play his troubleshooter. Col. Singh is not only a love-Guru but also a personality development expert. Under his tutelage and guidance, Arun’s personality is groomed in the right direction. Now he is ready to take upon his rival, Naagesh as well as win his lady-love, Prabha.

Here, in Mumbai, Prabha has got restless by not seeing Arun for so many days. That reveals that she also loves him but being a girl, has been expecting the boy to initiate the things. Arun’s return fills her with joy. Now a smart and renovated Arun not only outwits Naagesh but also the cheating motor workshop owner, paying him and his gang in the same coin and sets the undisciplined subordinates in the office also right. Prabha is glad to see the change but she is apprehensive of his true intentions now. Col. Singh also arrives at Mumbai to check where this love-story is heading and whether his tuition has indeed helped Arun or not. In the climax, Arun does not go exactly according to the coaching of Col. Singh (which was not required also) and wins Prabha over through his original self only. 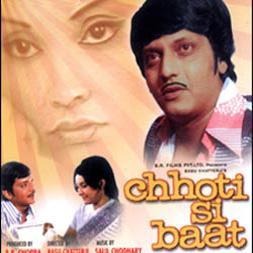 Chhoti Si Baat shows how simple, low budget and down to earth movies can be the ultimate winners. Despite certain illogical things (the most illogical one being the trick of throwing the lit cigarette on the saree of the lady, taught by Col. Singh to Arun which Arun did not apply in the climax when being with Prabha) and a wafer-thin storyline stretched for over two hours, this movie scores at several places and provides a feelgood experience to the watcher. It’s a movie which most of the middle class Indians can relate to. Love is a feeling which almost everybody undergoes at least once in his / her life and the real life situations for love are mostly the same as shown in this movie. It’s a comedy but not meant for generating laughs only. It touches a chord in the viewer’s heart at many places. While watching, the viewer effortlessly gets attached to Arun and starts praying for his ultimate success. 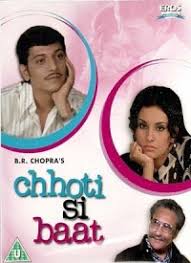 The career of director Basu Chatterjee has been a mixed bag. On one hand he has directed many sub-standard movies, on the other, he has directed some very good and memorable movies. Chhoti Si Baat falls into the later category. Produced by B.R. Chopra, this movie tickles, entertains and inspires all at the same time. The climax is toned down but it has been the style of Basu Da to keep a low tempo climax in his movies. Entertainment prevails throughout and there is no boring moment in the movie. It appears to be the love story of any ordinary youth and hence a layman can relate to it. It was made when the term Rom-Com was not used in the cine-circles. But now it’s considered a classic rom-com with a perfect mix of comedy and romance. It’s the simplicity prevailing in every nook and corner of this movie that goes deep into the heart of the viewer. 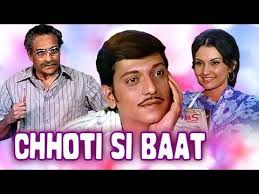 Since myself has been working in the offices for the past two decades, I can relate to the experiences of Arun. Subordinates may go for arrogance and insubordination if the superior is a simpleton or not-so-smart. The superior has to show his smartness and authority and make the juniors obey him. And if not oversmart, a truthful and sincere person has to be at least that much smart that none is able to take advantage of him anywhere (like Naagesh takes advantage of Arun when Arun invites Prabha to lunch and Naagesh imposes himself upon them).

One flaw of this love story is that it has been made from the viewpoint of the male. Though the side of the female has been shown to some extent through her talks with her lady-colleague about the shy guy, still the moviemaker has delved mainly into the psyche of the boy only and not the girl. Though the feelings of Prabha have been expressed through the song – Na Jaane Kyun when she is feeling the absence of Arun in her life, still a lot seems to have been unexpressed on her part. 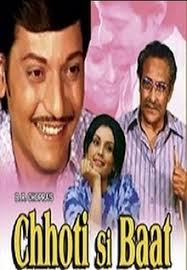 Amol Palekar had mastered the art of playing a simple hero having boy next door looks during the seventies and created his own fan-following. Chhoti Si Baat is one of his such kind of movies only with the role being a tailor-made one for him. He makes the viewer get attached to his smiles and frustrations alike and his triumph in the end appears to the viewer as his own triumph in the battle of life and love. Vidya Sinha was the perfect choice for the girl next door kind of roles due to her simple middle class looks and natural acting in such type of roles. After Rajnigandha (1974), Amol and Vidya prove again in this movie that they make a perfect pair. Asrani is marvellous like always. However the show-stealer is Ashok Kumar, the seniormost actor of Bollywood during that era. His using the peculiar terminology to describe Arun’s personality and problems, viz. IMPROPER CONDITIONING & DEFECTIVE VERBAL COMMUNICATION, LOVE LABOUR LOST CASE, UNSTABLE PARA NAUTICAL FRUSTRATION etc. amuses. The script-writer and dialogue-writer have immensely helped this seasoned actor in delivering a memorable performance.

Vidya Sinha is celebrating her birthday today whereas Amol Palekar will be celebrating his on 24th November. While conveying my warm wishes to both of these brilliant artistes, I reiterate that smartness counts in love, in career, in various other matters of life, everywhere ! I do not claim to know much about female-psyche. But my view is that a lady may lose her heart to a simpleton but she doesn’t want her man to remain a simpleton for the world because she can never tolerate the love of her life losing out to the others in any sphere of life. So friends, be simple to win the heart of a lady but be smart enough to grab her hand for the whole life.