Posted on November 4, 2017 by Jitendra Mathur

I was surprised when the promos of this movie had started to be aired on TV channels. It was the beginning of 1998 whereas the title of the movie was kept as 2001. However since I have always been fond of suspense thrillers and from the promos it smelled to be in the same genre, I went to watch this movie. In the credits, the writer of the movie was displayed as Ved Prakash Sharma and in all probability, it had to be the famous Hindi mystery and thriller writer – Ved Prakash Sharma only who was writing for the Bollywood movies too in those days. Well, I watched this movie in Delhi (I was residing in Delhi those days because of my pursuit of the Indian Civil Services) which is based on the plot of serial killings in a city. Soon thereafter, the latest novel of Ved Prakash Sharma hit the market whose title was Mr. Challenge. When I was going through that novel, I felt that there were similarities in certain incidents in and the basic frameworks of the stories of the novel and the movie. And then suddenly the name of the character that turns out to be the murderer in the ending pages of the novel flashed in my mind like a lightning. Why ? Because I had seen the movie earlier and since the stories were similar, naturally a similar character only must have been unmasked as the murderer in the novel as it was in the movie. And my guess proved right. 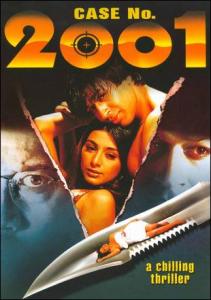 The uncrowned king of Hindi pulp fiction in his time – Gulshan Nanda was famous for getting new ideas for writing new novels by watching the movies that were based on his earlier novels only. I think, that’s how the professional novelists function. Ved Prakash Sharma followed suit by writing the novel as well as the script of the movie simultaneously (or one after the other). Moreover he wrote another novel – Hatyara Mangalsutra (the murderous Mangalsutra) after a decade (in 2008) by using the script of this movie itself, keeping the name of the young hero of the novel as the same of his counterpart in the story of the movie and using the incidents of the movie in that novel. Wow ! Once you are getting business for your smoothly running profession, you can mix and remix the same stuff to present new products to the consumers who after consuming only, come to know that the producer has served them the almost the same product in new packaging. 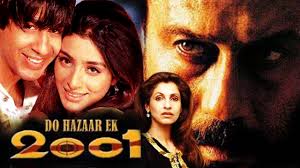 Well, now for the movie. 2001 or Do Hazaar Ek (two thousand and one) starts with the murder of Julie (Upasna Singh) who is the mistress of a minister (Sadashiv Amrapurkar) and this murder is followed by many other murders which are of advocates (Navneet Nishaan and Sarat Saxena), businessmen (Gulshan Grover and Suresh Oberoi) and that minister. A unique number – 2001 is found as written near every dead body. The story is set in Bangalore. The cops investigating these crimes include Commissioner of Police – Malik (Mohan Joshi), inspector Sunil (Jackie Shroff) and inspector Rajat (Rajat Bedi). Sunil is mature whereas Rajat is capricious but they have to adjust with the polar different natures and approaches of each other because their boss has instructed them to work together on this case. Rajat falls in love with a petty criminal girl – Billo (Tabu) in between of carrying out of this assignment. Sunil is happily married to Roshni (Dimple Kapadia) and is having two kids. Gradually Sunil and Rajat get adjusted to each other and work in harmony to unearth the mystery behind these murders as well as the number – 2001 which the killer has written near the corpse of every victim.

This movie has been directed by Raj N. Sippy who had once presented quality movies like Inkaar (1977), Satte Pe Satta (1982) and Satyamev Jayate (1987). However this movie highlighted that his time was over. He could have presented a gripping murder mystery but he faltered big time. Instead of concentrating on the mystery, he devoted his resources (the most important resource being the duration of the movie) to the masala meant for the regular movie buffs viz. sex, comedy, romance, songs and action. In fact, more than the director, the action director seems to have worked hard because the action-sequences are too many and quite prolonged. Plus we have the rom-com involving the debutante hero (Rajat Bedi) and the seasoned heroine (Tabu) which also has got ample footage. The mystery behind the (several) murders have been neglected amidst all these whereas it only should have got prominence because of being the part and parcel of the basic story.

Still, the movie is not a complete disappointment for the typical Bollywood movie viewers who enjoy sex, action, romance, comedy and songs. If you take interest in the mystery aspect, you will get bored because the flow of the mystery based narrative is blocked quite frequently (every now and then) by songs, comic scenes, romantic scenes and action-sequences. However if you enjoy all the time tested formulae used by the Bollywood filmmakers, then you may like the stuff coming on the screen. Putting it frank and straight, the screenplay could have been written in a much better way and could have been presented on the screen in a much better way as well. The movie is not a disaster all the same.

Performances are all okay. Jackie Shroff and Dimple Kapadia have done satisfactorily. Tabu has, seemingly for a change, done a different type of role but she amuses the audience by her interactions with her hero – Rajat Bedi as well as her maternal uncle (Deven Varma). The baddies as well as the supporting cast members have done whatever they might have been told to do by the director. But the actor who truly stands out is Rajat Bedi. Mainly this movie runs on his stout shoulders only. Other than the breathtaking action scenes, he has performed very well in romantic, comic and sentimental scenes too. His entry scene itself is a highly impressive one. Unfortunately he had to debut through this flawed movie, else he could have carved a niche for himself in Bollywood.

Anand Raj Anand’s music is forgettable. However, the movie boasts of technical excellence. The art director and the cinematographer have performed their parts proficiently. Editing is also ok. I have already admired the action director who has infused life into this action studded movie. It’s the action and thrill part of the movie which has made its viewing on the big screen as very delightful for the action lovers.

Today is Tabu’s birthday. While conveying my hearty wishes to her, I recommend this murder mystery which is more an action-thriller to the audience of action movies and suspense thrillers as a one time watch. The audience of romance and comedy also can give it a dekko because actually this is a mix-masaala. The only word of caution is that it should not be watched with a high degree of expectation, else you will feel as let down.

5 Responses to An action-studded murder mystery