Posted on November 3, 2017 by Jitendra Mathur

Today my son, Saurav has completed 14 years of his age. Last year, I had posted the review of Ehsaas (2001) on this day which is based on the relationship of a father and his son. This year also, I am posting the review of a movie whose story pertains to a father and his son only. It’s Shakti (1982). I thank my dear friend, Deepak Bhaardwaj for inspiring me to write its review.

Though Shakti (power) is the story of a father and a son who get distanced because of a misunderstanding that took place in the childhood of the son and that distance gets bridged only when the life of the son comes to an end, let me make it pretty clear that this movie is made on the lines of the most memorable movie of Amitabh Bachchan’s career which labelled him as the Angry Young Man forever, i.e., Deewaar (1975). The writers of Deewaar, Salim-Javed revisited that classic movie seven years later by using the similar storyline which was originally for a mother and two sons, this time for a father, a mother and a son. In Deewaar, the mother was torn between one righteous son and one criminal son of hers whereas in Shakti, the mother gets torn between the law-protecting husband and the law-breaking son.

Supercop Ashwini Kumar (Dilip Kumar) is dead honest and highly dutiful who considers his duty above everything including his family. And when the question comes whether to do his duty or to save the life of his little son who has been kidnapped by the baddies, he prefers performing his duty as a commited cop over performing his duty as a loving father. Besides, one member of the kidnapping gang, saves the life of the little boy who could be killed by the baddies. Both these incidents leave a very negative imprint on the tender heart of the kid (Master Ravi) who starts sympathizing with the criminal and fostering a grudge against his father in his heart. Years later, when the son, Vijay (Amitabh Bachchan) is a grown-up man, the unresolved issues of childhood still trouble him. He feels that his father does not love him. He himself becomes a criminal and gets added to the wanted criminals list of his father. The most hit by this father-son conflict which is more subtle, less loud is the mother (Raakhee). Falling in love with Roma (Smita Patil) and then marrying her also does not bring any positive change in Vijay’s life and finally he reaches what is the destiny of a criminal in the hands of his father only, realizing before his death how much his father loves him.

The biggest strength of Shakti is neither the screenplay nor the characters but the power-packed performances of the lead actors performing the father-son duo. Dilip Kumar and Amitabh Bachchan have delivered towering performances and so this movie was called a Clash of the Titans by many spectators as well as critics. They have risen above the script and made the movie a memorable one. Action star Amitabh Bachchan has delivered another highly emotional performance in a role which contains the shadows of Deewaar. Dilip Kumar, in this second innings of his career, is again highly impressive. And the one who surpasses these two is Raakhee who has been quite surprisingly cast as AB’s mother (she has played as his heroine in several movies). In perhaps the first mature role of her career, she has performed superbly. One of the pillars of parallel cinema movement, (Late) Smita Patil joined the commercial cinema and her pair with Amitabh Bachchan appears quite cute on the screen. The song – Arre Jaane Kaise Kab Kahaan Ikraar Ho Gaya is an example of the lovable romance and amazing on-screen chemistry of Amitabh and Smita. 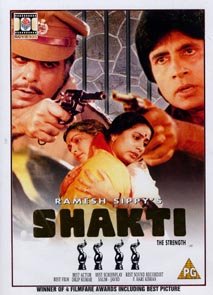 Salim-Javed were quite proficient in writing action-emotion-packed scripts suiting Amitabh Bachchan and they have done their part well though this is not a great script. However the angle of misunderstanding between the dutiful father and the love-hungry son has been developed well rendering a highly sentimental flavour to the movie which has overshadowed the action and thrill aspects. The movie starts with Anil Kapoor who plays the grandson of Dilip Kumar (and the son of Amitabh Bachchan who is no more) and his grandfather tells him the whole saga, explaining how difficult it is to do your duty as an honest and committed policeman. The whole film runs in flashback and there is no boredom at any place. While watching, you remain engrossed though the script is formula-based only which can be easily seen, understood and felt. Ramesh Sipply who happens to be the director of the epic movie – Sholay (1975), has ably directed this movie according to the demand of the script and the stature of the cast.

Technically this movie is good. The production value is high. Dialogs (penned by Salim-Jaaved only) are in perfect harmony with the script. Editing is satisfactory though the length of the movie is on the higher side. It should have been curtailed by 15-20 minutes.

The great lesson that is rendered by this movie is the same that I repeat every now and then. Be communicative and never allow any communication gap or any distorted understanding of certain facts to play havoc with delicate relationships. Father-son relationship is a very special one and the father has to be expressive of his love towards the son so that the son never misunderstands him and no outsider gets a chance to bring about any rift between them. He should not expect the kid to understand the subtle language and make him vividly see and feel his fatherly love. The ending dialog of Dilip and Amitabh underscores it perfectly when Dilip says to Amitabh, ‘Main Bhi Tumse Bahut Pyar Karta Hoon Betay (Me too loves you very much, son) and then Amitabh asks, ‘To Aapne Kaha Kyon Nahin Daddy ?’ (Then why did you not express it, father ?).

I rest my case.

4 Responses to A power-packed father-son saga