Patriotism through a gadget-studded thriller

Posted on November 2, 2017 by Jitendra Mathur

Time and again, I have stated that hype and commercial success do not speak of the quality of the movie, especially the Bollywood movies. Average but overhyped movies become big hits and outstanding but underhyped ones do not get their due. Today again, I am reviewing a movie which is an excellent thriller but did not get the amount of commercial success it deserved. It’s 16 December (2002). 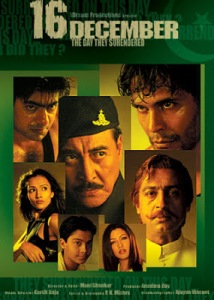 On the lines of Hollywood, now our Bollywood moviemakers have also been showing too much use of gadgets in the narrative for the past one decade at least. However, not anybody can use the gadgets intelligently by logically placing them in the narrative in such a way that they look an integral part of the story being told and not something imposed for just showing off. The debutante director of this movie, Mani Shankar, has shown his talent in his maiden venture by using many gadgets in his story in such a fine way that they look like the precious diamonds studded on a beautiful golden ornament.

16 December is called the Vijay Divas (Victory Day) of the Indian forces because on 16th December, 1971, they got Pakistani forces surrendering before them after a crushing defeat in the Bangladesh war. The plot of this movie is based on this premise only such that one Pakistani military officer, Dost Khan (Gulshan Grover) who could not tolerate this humiliation and kept on preparing vigorously for decades to inflict revenge upon India through use of a nuclear bomb. He comes into focus by default when the investigation of drainage of the nation’s money through the Hawala mechanism by an Indian intelligence squad led by Vir Vijay Singh (Danny Dengjongpa) is underway. How Danny with his team members – Milind Soman, Dipannita Sharma and Sushant Singh saves his nation from the malicious plan of Gulshan, scheduled to be implemented on 16 December, is the climax of this movie. 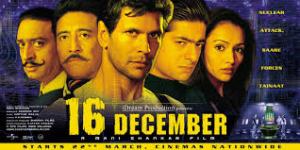 16 December starts with the murder of an Indian intelligence agent by Gulshan and the use of gadgets starts from this very first scene itself. The beginning of the movie is so impressive that it immediately takes the viewer in its grip and does not leave him till the ending scene. The narrative is thoroughly engrossing and the pace of the movie is fast for most of the time. It is a thriller which arouses true patriotism too in the audience. The spirit of laying down own lives for the motherland has been shown very realistically and very effectively. Danny has been shown as an ex-militaryman and Milind and others as his old military colleagues having a resentment towards him in the context of the killing of another military officer. This has been shown by good use of flash back. The Hawala procedure as well as the Indians involved in clandestine deals to make quick money for themselves but hollowing the country’s economy in this process, have been shown in a highly realistic manner. Danny’s sarcastically saying to Milind Soman – ‘Mera Bhaarat Mahaan, Sau Mein Se Ninyanve Be-imaan‘ (My great India, ninety-nine out of hundred are corrupt) does not seem theatrical to the viewers but it clearly appears to be the reflection of a patriot’s pain over the corruption rampant in his country. The way, the investing team trails the offenders on a clue-by-clue basis and ultimately reaches the crux of the issue, is spellbinding. The sacrifice of Sushant Singh in the breathtaking climax, moves the viewers. 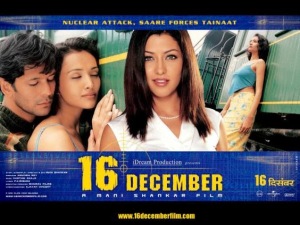 The weak point of the movie comes clear when the unnecessary romantic relationship between Milind and Dipannita hinders the flow of the narrative and irritates the viewer. It is done more so to him when the track of getting an account code number by Milind from Aditi Govitrikar through a fake romance with her, comes. This track with unnecessary burden of emotions dilutes the momentum of the movie. The director should have done away with these tracks and trimmed the movie which is otherwise so engrossing that it is difficult for the viewer to leave it even for a moment.. An element of laxity unduly creeps into the fast-paced narrative because of these and impairs the quality of the movie.

However considering these weak points as the scars on the face of the moon, we can easily identify the plus points of this movie which is not a masterpiece but leagues ahead of the run-of-the-mill Bollywood thrillers. The screenplay is tight,enhancing the viewer’s curiosity scene-by-scene . The performances are very good. Danny Dengjongpa has again showed his class. Milind Soman has done well alongwith the child artist playing his buddy (he is shown as an expert in decoding computer passwords). Sushant Singh is unarguably an underrated actor who seldom got due accolades for his excellent on-screen performance. 16 December is one more example to be quoted in this regard. Gulshan Grover is alright in his baddie role. Today’s birthday babe Dipannita Sharma is a debutante in this movie. She is not only pretty but also has done her job perfectly. On the other hand, ex-Mrs. World Aditi Govitrikar could not impress in her cameo. In fact, nobody is in the lead role in the movie. The story itself is the hero.

Music is ok. Technical aspect is excellent courtesy the use of gadgets. Production value is high. Editor has done well. The superfluous tracks kept in the movie as mentioned above, cannot be considered as his fault as including or excluding a complete track, falls mainly in the purview of the director of the movie.

16 December had got critics’ accolades at the time of its release but commercially speaking, this non-starrer, underhyped movie got average success only. I recommend this very good thriller to both the thriller fans as well as the people who like patriotic movies. It contains thrill and love for your country, both at the same time.

4 Responses to Patriotism through a gadget-studded thriller