Today, it’s exactly 16 years since Pradeep Kumar left for his heavenly abode. The Bengali hero played a long and successful inning in Bollywood as a hero and, in later years, as a supporting actor too. I am presenting this review in his remembrance.

Bheegi Raat (1965) is a triangular love story starring Ashok Kumar, Meena Kumari and Pradeep Kumar in principal roles, making the three angles of the triangle. It’s a coloured movie which was released in the transition period of Bollywood from the black & white era to the era of colours. This movie is mainly remembered for a classic song sung by both Mohammad Rafi and Lata Mangeshkar – Dil Jo Na Keh Saka, Wohi Raaz-e-Dil Kehne Ki Raat Aaee. Otherwise also, it’s an entertaining movie whose story has been set in the beautiful locales of Nainitaal, the Queen of the Hills.

Bheegi Raat (drenched night or rainy night) starts with a fateful night in which an orphan girl – Neelima (Meena Kumari) escapes from the claws of a rapist to whom her guardian had sold her. She finds shelter in the house of a kind and benevolent lady – Pushpa (Kaamini Kaushal) who is in need of a reliable governess for her small niece – Munni (Baby Irani), the daughter of her widower brother – Anand (Ashok Kumar) who is a businessman and has been spending a lot of time in London since his wife’s death. During the performance of her duty as the governess, she happens to come across Ajay (Pradeep Kumar) who is actually the son of a businessman based in Mumbai (then Bombay) but has left his home due to his father’s pressurizing him to marry a rich brat – Vineeta (Shashikala) and arrived there to develop his art of painting in the peaceful and beautiful environment of this hill-station, i.e., Nainitaal. Ajay rents a house in the neighbourhood of Neelima and they come close pretty soon, falling in love with each other.

Pushpa, on the other hand, perceives Neelima as her prospective sister-in-law (BHAABHI) because coincidentally, Neelima has a resemblance with Anand’s wife and Munni’s mother who is no more. When Anand returns from London, he is also startled to find this resemblance of Neelima with his deceased wife. Seeing Neelima’s affection for his little daughter, he also starts looking at her the same way as his sister is. And now the love-triangle is complete with two males – Anand and Ajay being desirous of marrying Neelima. Now our heroine is in a fix. She loves Ajay but feels the burden of Pushpa’s obligation too on her mind. The story moves further with twists coming in the tale at intervals. Pushpa passes away and after a lot of drama, Anand removes himself from the middle of Ajay and Neelima, paving the way for their union. 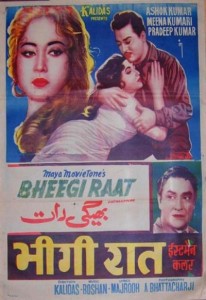 After watching a lot of Bollywood movies based on love-triangles in which the third person (mainly the male) steps aside of the path of the original two lovers, I feel that Bheegi Raat was one of those movies which started the trend of such stories. The climaxes of many later movies like Chandni (1989), Kuchh Kuchh Hota Hai (1998), Haan Maine Bhi Pyaar Kiya (2002), Humko Deewana Kar Gaye (2006) etc. are quite similar to the climax of Bheegi Raat.

Besides, in several movies of that period, it’s shown that ‘good’ females always put a premium on the social prestige of the males they’re associated with and irrespective of the fact of their being in love with someone else, they’re ever ready to sacrifice own love for the sake of the social honour of the second male. Bheegi Raat is a movie in this tradition only. It may appear as illogical to today’s generation but the Indian females developed in good Samsakaaras were built that way only in that time and even decades after that. 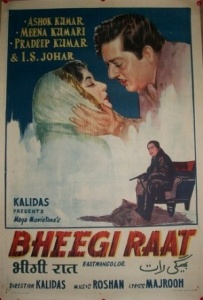 The title of the movie is as such because Ajay and Neelima come close to each other with the expression of the mutual feelings in a night involving heavy rainfall when they are forced to take shelter in a cave after getting severally drenched in the rain. In that situation only, the best song of the movie – Dil Jo Na Keh Saka comes for the first time (from Neelima’s mouth in Lata’s voice). Second time, it comes in the climax (from Ajay’s mouth in Rafi’s voice).

The negative aspect of this formula-based movie is its lacklustre script with many over the top things and certain over the top characters. The script writers and the director (Kaalidaas) remained satisfied with some well-executed sequences, good acting, good location and good music and did not pay attention to preparing a logical, coherent and convincing screenplay. However, from the viewpoint of watching an entertaining movie, the audience can very well ignore the weakness of the script and enjoy the pluses of the movie. The pluses are, of course, many.

The biggest plus point, in my opinion, is the beautiful setting of Nainitaal. I have never found this hilly town coming on the screen so beautifully in any other movie. Still the colours of the movie are quite bright and different scenes filmed in the beautiful locations of Nainitaal are perfect eye-candy for the movie-buffs. Myself, being aesthetic by nature, adores this aspect of the movie. The cinematographer has done a marvellous job in capturing the beauty scattered in Nainitaal in that period (of almost half a century ago).

Another plus point is performances. All the three protagonists – Ashok Kumar, Meena Kumari and Pradeep Kumar have done very well. While watching the movies of the sixties, I am always amazed to see how brilliantly Ashok Kumar played the roles of romantic lead while in the fifties of his life. He appears quite fit and smart despite his advanced years. Kaamini Kaushal who herself was a romantic heroine just a few years prior to this movie, has played the role of the affectionate sister and aunt as well as a benevolent lady effectively. The other members of the supporting cast have also done justice to the assigned roles. Hari Shivdaasani as Colonel Bhim Singh who is the landlord of Ajay and a close friend of Anand, is memorable. Shashikala was the most successful vamp in the Bollywood movies of that period and in this movie also, she has played the vamp with perfection.

Two scenes of this movie stand out in terms of execution and performances. One is Anand’s seeing Neelima and Ajay in romantic position in the new year eve party when he had decided to quit drinking (upon Neelima’s insistence) and brought coffee for himself and Neelima. His romantic dreams involving Neelima get shattered upon seeing that and then he breaks the coffee mugs and decides to celebrate the arrival of the new year with liquor only. The second scene is the hunting scene (involving several wild animals) when out of manly jealousy, Anand first plans to arrange Ajay’s death by getting him trampled by the wild elephants but seeing Neelima’s condition (she accompanies both these males on their hunting adventure), changes his mind and saves Ajay’s life. It’s a sensational scene. 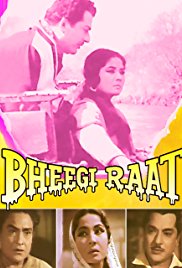 With my tribute to the versatile actor Pradeep Kumar, I recommend Bheegi Raat as a decent timepass movie to the regular movie buffs.