Now it’s time for the audience to go for Satyagrah

Normally, the moral is told at the end of the story. However for a change, I am spelling out the moral(s) of this story in the beginning itself as follows: 1. Quality and quantity cannot go together, the moment you start stressing quantity-oriented performance, the quality of the same is bound to go down, 2. An artist should not go for short-cuts because then the pieces created will not be extra-ordinary but just regular stuff, 3. A filmmaker should not take his audience for granted because it’s tantamount to inviting his own doom.

Don’t know whether the filmmaker Prakash Jha will ever pay attention to the aforesaid morals or not but if he does not, he will finish as a revered filmmaker as all of these are straightaway applicable to him. Firstly, since 2010, he started presenting one movie per year as if he is in a haste to increase the number of his directed movies and thereby compromising on their quality. Secondly, he (plus his sidekick, Anjum Rajabali) started going for short-cuts while preparing the scripts of his movies. The script of Raajneeti (2010) was written by keeping the Indian epic Mahabhaarat in front whereas the script of  was written by lifting the story idea straightaway from Rajesh Khanna-Amitabh Bachchan starrer classic movie – Namak Haram (1973). Thirdly, from Raajneeti onwards, he has started taking his (loyal) audience for granted and instead of making hard-hitting sincere movies, stepped into the shoes of masaala filmmakers like Manmohan Desai using a high profile star cast, big budget and formula-studded screenplay. The movie under review – Satyagraha (2013) is such a movie only. 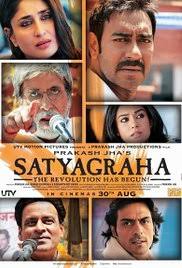 The word ‘Satyagrah’ (a strong urge or insistence for truth) was coined by the Father of the Nation of India – Mahatma Gandhi in the nineteenth century as a non-violent means to oppose injustices and wrongs. After using it successfully in apartheid-hit South Africa, he reused it against the colonial rule in India. However in the post-independence(as well as the post-Gandhi) period, this pious term has been grossly misused. Prakash Jha is the latest misuser of it. He has made this movie under the title Satyagraha which is devoid of Satyagrah itself and covers blackmailing under the name of mass movement, hero-worship, violence, item song, ridiculous romance, political gimmickry and above all, a hollow and superficial vision of the protagonists towards the desired end.

Prakash Jha (and his lieutenant Anjum Rajabali) has picked up the Lok Pal Bill movement of Anna Hazaare and his team (known as Team Anna in the media) for the story of this movie forcing several other incidents into the narrative viz. the murder of the honest officer – Satyendra Dubey by the construction mafia with the silent cooperation of the PMO itself in 2003, the non-violent Annshan (fasting) of Mahatma Gandhi against the policies of the British rule in India, the Chauri-Chaura incident which led Mahatma Gandhi to call his movement back in 1922 and finally, the assassination of Mahatma Gandhi himself in 1948. Prakash Jha has tried to pack too many things in his 152 minutes long movie leading to exhaustion of the audience who (unfortunately) visited the theatres towatch a hard-hitting socio-political comment as is usually expected from him.

For the first time, I am being vocal regarding the movement of Anna Hazaare and his team. In my humble opinion, their movement lacked vision and their ideology was (and still is) confused. I always felt that Anna Hazaare did not know what he wanted for the country in specific terms. For himself, he appeared (and appears) to gain publicity and reserve his name in the books of history as someone parallel to Mahatma Gandhi. And that’s why his movement did not achieve anything except stirring the nation for a brief period and raising some fake hopes in the hearts of the masses. Anna’s disassociated team member Arvind Kejriwaal is better in this respect that he cleared his vision and his goal and decided to fight the system by entering it. Ever since the subsidence of his movement, Anna Hazaare has been doing nothing but issuing irrelevant statements regarding the social phenomena, the political parties and certain individuals in politics, forgetting very conveniently that Mahatma Gandhi never resorted to targeting individuals as his thinking was issue-based (in fact, ideal-based) and not individual-based.

Prakash Jha has put Amitabh Bachchan in the role of the character akin to Anna Hazaare and Ajay Devgan in that akin to Arvind Kejriwaal. Well, quite contrary to the living style of Mahatma Gandhi, Amitabh Bachchan is shown as residing in a magnificent mansion and living a highly comfortable (if not luxurious) life. If he is a retired teacher only, how could he afford such a lavish residence and a maid servant too (his honest son is quite young and not served for as many years in the government job as to afford this life style) ? Even the food habits of himself and his family members do not speak of simple living and high thinking. He is highly arrogant (my way or highway approach) which cannot be admired or supported. His movement goes astray and it is not known till the very end whether its declared objective was achieved or not.

The movie defies logic at several places and the number of holes in the script are more than that in a sieve. It is more an action-cum-emotion packed entertaining drama than the revelation of some truth already not known to the audience. Since it is studded with incidents and twists, the speed of the narrative is quite fast (slackened only by the superfluous romance and the concerned song of Ajay Devgan and Kareena Kapoor). Like the Anna Hazaare movement, he has shown extensive usage of electronic media as well as social media to further the movement ignoring the fact that a mass movement cannot be aroused just by TV and internet. For most of the participants in such campaigns, it is something like fashion and not something getting its existence from the genuine sentiments lying in the depth of the heart. Satyagraha has its moments but they are few and far between. For most of its time duration, it appears something superficial whose propagators themselves don’t appear to be knowing what’s their desired outcome or the alternative system of governance they are aiming at. They are just shouting slogans and cursing the faulty system (plus the individuals occupying the chairs in that).

All the same, it is successful in meeting one objective – entertaining the audience. Perhaps Prakash Jha aims at this objective (culminating in the commercial success of the movie) only now. After Apaharan (2005), he seems to have changed his style of film making and lost his uniqueness in that. The climax of the movie is utterly filmy and disappointingly unimpressive.

Technically, this action-packed movie is up to the mark. Prakash Jha has unnecessarily tried to administer a dose of comedy too to the audience through the character of the sycophant of the corrupt minister. Music is okay. Janata Rocks and the title track are according to the mood of the movie. Background score is noisy (at least I felt so). Dialogues are hollow and devoid of genuine punches.

Performance wise talking, Manoj Bajpayee has got a role tailor-made for him and naturally, he is the best performer. Amitabh Bachchan does not look even the shadow of a Gandhian Satyagrahi. He, instead, casts the shadows of his erstwhile angry young man persona (now we can term him as the angry old man). In the context of his son’s death, his character can be contrasted with that of him in Mahesh Maanjrekar’s Viruddh (2005). Ajay Devgan has done justice to his role but there’s nothing new in his performance. Arjun Raampaal’s character is completely confused whereas Amrita Rao has not got much scope. Kareena Kapoor’s acting is third class and she can very easily count this performance of hers in the five worst performances of her career till date. Her characterization is illogical and her looks are laughable when viewed in the context of the role she is playing.

I recommend Satyagraha as a one time watch to the regular entertainment-seekers because, as said earlier, this is a fast-paced, action-packed entertaining movie. However it’s utterly disappointing for Prakash Jha’s loyal audience including Jitendra Mathur. Now it’s the time to go for Satyagrah and reject his movies. For whom ?