When does a girl become a puzzle for a boy ?

A boy and a girl of very young age become friends. They walk together, talk together, laugh together and play all kinds of tricks and nuisances according to their age. Nowhere they feel any gender difference between them. However one fine day, the boy feels that the girl has changed. She is no longer frank and free with him and shying away from him. The boy tries his level best to figure out the change in the attitude and behaviour of the girl towards him and sort this issue out but cannot. The girl has suddenly become a puzzle (PAHELI) for him. Can you tell him – why ? Watch Paheli (1977) to understand this puzzle.

Paheli (puzzle) is a movie from the flag-bearers of simplicity in Hindi cinema – Rajshri banner and true to their tradition (maintained in that period), they have made this story with a rural backdrop and selected teenager newcomers to play the principal roles. It’s a lovely movie which touches the the chords in the romantic hearts again and again throughout its duration.

Montu (Satyajeet) is a schoolgoing teenager who lives with his widower father, Brij Mohan (Nitin Sethi) in the city. During summer vacation, he visits the village with his friends which is actually the hometown of his family and where his grandmother (Durga Khote) resides. There he happens to meet two teenager girls – Gauri (Nameeta Chandra) and Champa (Poornima Jayaraam). Firstly, the girls play mischiefs on him and his friends but soon thereafter he gets friendly with them, especially with Gauri and when his friends return to the city after a couple of days, he doesn’t go with them because he has started enjoying the village life, the love of his grandma and most importantly the company of Gauri. The twosome (Montu and Gauri) keeps on wandering about the village, the fields and all the nearby places. Innocent love has blossomed in their hearts but they being yet to grow-up, are not able to perceive it that way. They only know that they like to be with each other, eat together, sing together, laugh together and play together. Montu comes to know that being an orphan, Gauri is not comfortable in her home and gets a discriminatory treatment from her fostering aunt (Deena Pathak) as against her cousin sisters. He also happens to meet some golden-hearted people like Balraam (Arun Govil), his sweetheart Kanak (Abha Dhuliya) who is the daughter of the Vaidya (Ayurvedic physician) of the nearby village and his aged and widow mother (Leela Mishra). After having a very nice vacation, Montu returns to the city with a promise made to his grandma as well as Gauri to come again next year.

Comes the next year and Montu is again in the village to spend his vacation. However despite the village being the same, there is a lot of change visible to and felt by him. The biggest change is the behaviour of Gauri. The girl who was after him like anything, teasing him, playing tricks on him, laughing with him, singing and dancing with him in the rain, showing him everything in the village and the nearby locations, bringing water-chestnuts for him to eat (because he is too fond of them) and doing what not for him; is shying away from him. Whenever he visits her, she does not come before him and talk to him. Why ? Asks his heart. The teenager girl has become a puzzle for this confused boy. He comes to know that Gauri’s close friend – Champa has got married and now a groom is being searched for Gauri too. He is hurt less by this fact that Gauri may be married to someone, more by her maintaining distance from him. Feeling lonely and painstruck in his heart, Montu decides to go back to the city, never to return. When he is about to leave, Gauri arrives to bid farewell to him with his favourite water-chestnuts as a parting gift. And suddenly, the puzzle behind Gauri’s seemingly strange behaviour gets resolved before Montu. And after that, he gets the biggest and the most pleasant surprise of his life from his grandma.

This lovely and touching movie tells that during puberty, girls get mature faster than boys. They come to understand the male-female attraction and the importance of their union through the sacred knot much earlier than the boys. And that’s why girlish shyness comes to fore when there is attraction linked to the opposite sex in the heart of the girl concerned. The boy may not be able to understand it if they are of the same age group.

Well, this movie was made in 1977, i.e., four decades back. In those days, even Doordarshan was available in only a few villages of India. Today, in this era of cable TV and internet, the male-female attraction and their sexual union is known to the children pretty soon and the boys are more knowledgeable in this regard. Hence the plot of the movie is not relevant in today’s scenario. The movie was relevant in its period because the girls used to understand these things through the physical changes in them as well as the things coming to their notice in the rural milieu they were in (like mating in the animals and in the birds). Nature used to be their teacher in this regard.  Whenever the girl concerned used to get a tender feel or a special liking for some boy in her heart, she understood the indication of the nature and the shyness used to appear spontaneously in her gestures and interactions with / references to that boy. This movie is to be watched, understood and felt in this perspective only.

The movie has a very simple milieu but the beauty of the mother nature has been portrayed in such a way that any nature-loving spectator may start wishing to settle down in the village shown in the movie. The art director and the cinematographer have done a great job. The production value is modest but the aesthetic value is very high. The characters of the story are as simple as the various locations shown. Simplicity is the norm maintained throughout the movie. 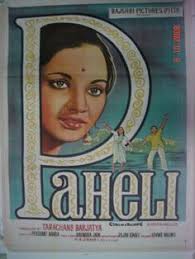 The screenplay is not well-knitted. Many incidents and characters (viz. Balraam, his mother, his sweetheart etc.) are not linked to the main track. The apparent reason is the wafer-thin storyline and to fill the time duration, additional characters and the events linked to them seem to have been inserted in the narrative. But still the movie is interesting and it’s to the director’s credit that he has converted even the superfluous characters and the episodes related to them into highly impressive ones. The characters have their own stories and problems but the emotional connections do not allow their individual issues to remain exclusively theirs. When you love someone from the core of your heart, how can his problems and pains remain his only and how can your problems and pains remain yours only ? Even the smallest character in the movie is able to leave his / her mark. The over the top and unnatural characters of Gauri’s cousin sisters dilute naturalness in the scenes but they create a lot of laughs for the viewer. The movie contains healthy comedy alongwith a good dose of sentiments and (untold and indirect) romance.

The artistes have been chosen quite wisely. All have next door looks and appear to be out of the real life people around us. Many characters including the heroine are debutantes. But these newcomers alongwith the hero – Satyajeet and seasoned character artistes like Leela Mishra, Durga Khote and Deena Pathak have delivered natural performances. They look ordinary but win hearts. A newcomer boy – Arun Govil (who has played Balraam) later on carved a niche for himself in the world of Indian cinema and television. With his boyish looks, he is more attractive than the obese hero. It’s the writer’s brilliance that even the obesity of the hero has been made a part of the screenplay (the heroine teases him by calling Motu or a fat person instead of calling him Montu).

Blind lyricist-cum-composer, Ravindra Jain has prepared ear-soothing songs for the movie which contain the fragrance of the Indian soil as well as the Indian culture. The songs have been admirably sung by Hemlata, Suresh Wadkar, Chandrani Mukherjee etc. The best song is – Sona Kare Jhilmil Jhilmil, Roopa Kare Kaise Khilkhil which the hero and his female friends sing while enjoying the downpour from the sky.

Paheli is by no means an outstanding or some great movie but it’s a touching and lovable movie whose characters are heart-conquering. Indian villages are no longer the ones as shown in the old movies of Rajshri banner. However the simplicity, innocence and cleanliness in hearts shown in them is something to cherish forever. Virtues of life and family values are also there to adopt and preserve for the generation next. If you love simplicity and Indian villages, watch Paheli and lose your heart out to its characters.

5 Responses to When does a girl become a puzzle for a boy ?