Amitabh Bachchan has been, beyond any doubt, the biggest entertainer of the Indian cine-world with the durability that no star of Hindi movies could ever match. He remained on top for around two decades and still in his seventies, he is more popular than several much younger stars of Hindi movies which is an achievement that few could match. He has turned 75 today (11th October, 2017).

AB always believed in moving ahead and molding himself with the changing times and it’s this flexibility that made him so durable that still stories are written around him, keeping him at the nucleus of the movie concerned. He has always been humble, never arrogant; a quality which his critics also have to acknowledge and admire.

During his heyday, AB was so much popular with so much positive energy flowing in and spreading out of his personality that he was able to pull the movies on the box office all alone, demonstrating himself as bigger than several other aspects of the movie including the story, thus gaining the title of Big B. For many such movies made during a decade spanning from the mid seventies to the mid eighties, he was one man army, capable of winning the battle of the box office on his own. One such movie starring him is Khuddaar (1982). 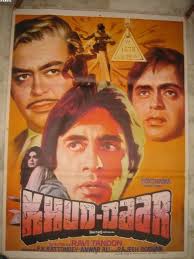 Khuddaar (a man of self-respect) is the story of three brothers the eldest of whom is Hari (Sanjeev Kumar) who loves his motherless younger brothers very much but his wife Seema (Tanuja) does not like them and therefore, does not want them to live in her house. When Hari moves out for some time to study law, she expels both of them from the house. Now these two hapless and resourceless lads have to struggle to survive in this cruel world.

The elder of the two grows up as Govind (Amitabh Bachchan) who is fondly called as Chhotu Ustaad by all and sundry (very few people know his real name) and Rajesh (Vinod Mehra) fondly called as Raaja. Now Govind aka Chhotu Ustaad makes it the aim of his life to enable Rajesh aka Raaja to climb the heights of success and prosperity in his life. He works hard as a taxi driver to earn enough money for this purpose, cherishing his dream to see his younger brother to become big in his life. But!

But Rajesh gets spoiled due to bad company. And a baddie Bansi (Prem Chopra) takes advantage of this spoilage of his. Though Rajesh is able to get married to Manju (Bindiya Goswami), the daughter of a rich businessman Mr. Varma (Pinchoo Kapoor), he leaves his brother’s house and moves to his in-laws’ place. Now Govind is heartbroken only to find some solace from the family of Rahim Chacha (A.K. Hangal) who has stood by him and Rajesh since their childhood days and Mary (Parveen Baabi), the love of his life.

As destiny has its own way, one day Mr. Varma, the father-in-law of Rajesh is murdered and Govind is arrested for this murder. When he is brought in the courtroom for the trial, both himself and the person sitting on the chair of the judge are startled like anything to see each other. Why ? Because the judge is none else but Hari only, the elder brother of Govind and Rajesh. Needless to say that Hari resigns from his post of the judge to act as the defense counsel of his younger brother and finally succeeds in unmasking the real culprit and getting Govind exonerated after the courtroom drama.

Khuddaar is a highly entertaining movie. And it can be properly enjoyed by watching it on the screen and not just by going through the few paras written by me above. It’s gripping for the audience right from the word ‘go’ to the ending scene. Writer Kader Khan has written a spicy script for this movie and director Ravi Tandon has very proficiently brought it on the screen. There is little boredom in this movie. It’s entertainment only which soaks every minute of its duration which is a little less than three hours. 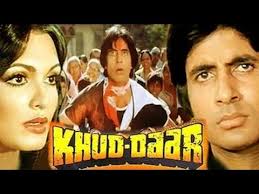 Its biggest USP and the biggest ingredient of the entertainment embedded in it is Amitabh Bachchan only. Though the movie features stars like Sanjeev Kumar, Tanuja, Parveen Baabi, Vinod Mehra, Bindiya Goswami etc., finally it’s AB only who turns this ordinary script into an extra-ordinary movie which none can regret after watching. AB has shown every colour of his acting talent in this movie – comedy, emotion, action and what not! His comic timing is so perfect that even the seasoned comedians may be envious of that. Despite getting able support from all others, he has carried the entire movie on his shoulders. The title is meant for his character only and he only is the heart and soul of this movie. I doubt whether any other hero would have been able to do justice to the role of Govind aka Chhotu Ustaad which appears to be tailor-made for Big B.

Rajesh Roshan has prepared very good music for Khuddaar whose songs are very popular even today. Angrezi Mein Kehte Hain Ki I Love You, Mach Gaya Shor Saari Nagari Re, Hatt Ja Baajoo Nahin To Uda Doonga, Disco 82 etc. are fondly listened to and hummed by the music lovers of today’s generation also. Disco 82 was prepared keeping in view the year of release of this movie, i.e., 1982 but it thrills and moves the listener’s feet even in 2017. In addition to the songs mentioned supra, the album contains one inspiring song – Oonche Neeche Raaste Aur Manzil Teri Door as well as one emotional song – Maa Ka Pyar Behan Ka Pyar also. 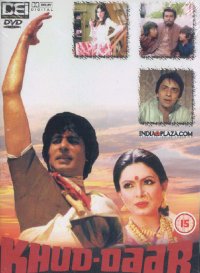 Technically the movie is perfect in all the respects and despite its excessive length, the editing job has been done so skilfully that the grip of the narrative on the audience is seldom loosened. Despite the predictability of the story, the viewer keeps on watching and enjoying the happenings on the screen without burdening his mind. There is no song which irritates by appearing in-between because it becomes a part of the smooth flow of the story only.

Khuddaar was a commercial success and rightly so because it’s like a spicy dish with no spice being high or low than required in quantum. The mix of the regular entertainment formulae is the optimum here and there is a balance in all the aspects of the story. I advise all the movie buffs to watch it without any prejudice and allow themselves to be entertained by the one and only Amitabh Bachchan. 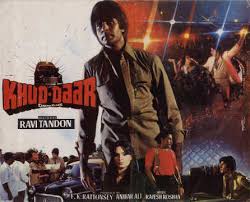 I wish him many many happy returns of the day.

6 Responses to One man army known as Amitabh Bachchan