Posted on October 6, 2017 by Jitendra Mathur

As said in a couple of my earlier reviews, the decade of the sixties witnessed many Bollywood potboilers which lacked any solid story but were made in such a way as blending melodious songs, good locations and charming actors in the otherwise routine script that they proved to be quite entertaining for the audience and hence quite naturally, scored on the box office. Today I am reviewing one such movie again. It’s Mere Sanam (1965). 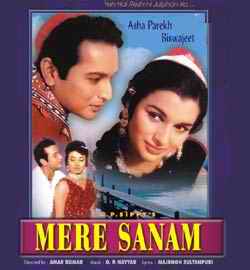 Mere Sanam (my sweetheart) is the love story of Neena (Asha Parekh) and Kumar (Biswajeet) with Shyam (Pran) playing the role of the villain and Kaamini (Mumtaz) being his accomplice in his evil designs. The story has been woven like this that Neena, her female friends and her mother reach a holiday spot and find accommodation in a lodge whose owner is Kumar but the caretaker is Shyam. Shyam obliges the ladies by allowing them to stay there but Kumar arrives at the lodge and asks Shyam to remove those ‘intruders’ from there. Now Shyam who is actually a baddie (involved in illegal opium trade also), tells different false stories to the female-group on one hand and Kumar on the other. As usual in our Hindi movies, eventually Kumar and Neena fall in love but Shyam himself wants to marry Neena to usurp her wealth (she is actually the daughter of a rich man who had got separated from her mother and herself long back). He creates misunderstandings between them with the help of Kaamini but the things take such a turn that Kaamini gets murdered in the hands of Shyam’s man with Kumar being trapped in it. After a few more twists in the tale, the lovers reunite and the villain is caught by the law.

The first part of the story has been adapted from the Hollywood movie – Come September (1961). I have found that this idea has been adapted (with some changes) in a couple of other Bollywood movies too. Anyway, the script has been written quite interestingly as per the taste of the Indian audience.The interest of the viewer has been maintained till the interval through rom-com and post-interval through the activities and plans of the villain. The beautiful locations of Kashmir and the melodious songs have helped the otherwise not-so-great screenplay. The thing is, you enjoy whatever comes on the screen and that’s the only important thing for a film’s success. 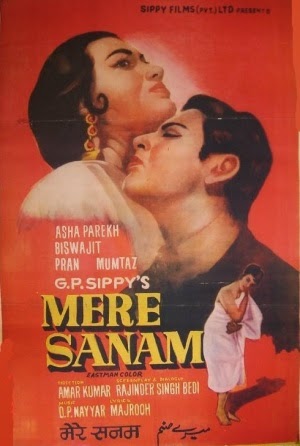 Biswajeet and Asha Parekh make a charming pair and their on-screen romance is damn good. However, considering the nitty-gritty of the script, Shammi Kapoor would have been a better choice for the role of the hero. The supporting cast is routine. Rajendra Naath as the comedian, Pran as the villain and Mumtaz as the vamp fit the bill of their respective roles. No performance is great. No performance is bad either. If at all, someone is to be mentioned specially for her performance, it’s Mumtaz whose vampish act which also contains the chartbuster song of Asha Bhosle – Ye Hai Reshmi Zulfon Ka Andhera Na Ghabraaiye leaves its imprint on the mind of the spectator. 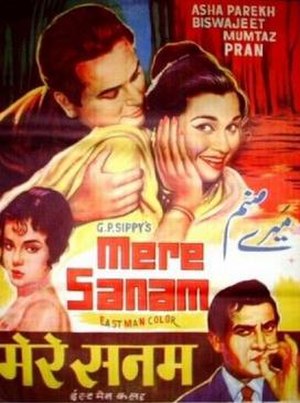 Technically, the movie is up-to-the-mark. The cinematographer has captured the beauty of Kashmir very well. Length is according to the norms of that period and since there is no boredom and the well-known formulae of romance, comedy, sentiments and thrill have been blended optimally, the length of the movie appears to be appropriate. Editor has done his job well. Ditto for the art director. Background score is also okay. The movie has a high production value. 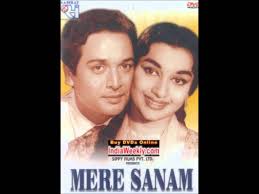 Mere Sanam is a formula-based regular Hindi movie and there is nothing great about it. However it has a high entertainment value and if you are willing to watch it to get a nice timepass, it will certainly not disappoint you.