I am contrasting it with Lage Raho Munna Bhai

Posted on October 4, 2017 by Jitendra Mathur

Writing positive reviews for such movies which were not only box office disasters but also trashed by the critics, is nothing new for me because I believe in the quote of esteemed movie reviewer Aruna Thyagarajan (moviezombie) : ‘Review is about feelings and what the movie evokes in one. Moviemaking and movie viewing is so subjective….never know who it reaches out to and how.’ If a movie appeals to my heart and I find certain positives in that making it at least one time watch, I recommend it without getting influenced by the public opinion about it. Today I am reviewing one such movie only. This movie is Madhoshi (2004) starring Bipasha Basu, John Abraham and Priyanshu Chatterjee in lead roles.

Madhoshi (inebriety) is the first Indian movie made after the unforgettable horrifying terrorist event in USA on 11th September, 2001 known as 09/11 event. The pregnant elder sister of the heroine Anupama (Bipasha Basu) and her brother-in-law were in the WTC and talking over phone to herself when the terrorist plane struck the building and both got killed alongwith several others in that attack.

That mishap had a severe adverse effect on the heart and mind of Anupama and a kind of hatred started developing in her somewhere deep down the surface of her subconscious. After a couple of years, Anupama, doing a painting course, gets engaged to Arpit (Priyanshu Chatterjee) who is the son of the friend of her father. However shortly thereafter, she comes across a stranger – Aman (John Abraham) who tells himself as the member of an anti-terrorist organization. She, being attracted to him due to his mission and his daredevil profession, keeps on meeting him at his residence. This interaction of Anupama and so-called Aman covers several things and has several facets.

After some time, when the issue of Anupama’s marriage with Arpit arises, she refuses saying that she’s in love with Aman. But Aman is nowhere. Nobody can see him except Anupama. Nobody can hear him except Anupama. But being a painting student, Anupama has made many sketches of Aman’s persona. Now Arpit is in a fix. Everybody says that Aman does not exist but the sketches say that he exists at least for Anupama. Being deeply in love with Anupama since they first met, Arpit decides to do something for Anupama who is going lunatic, being considered schizophrenic and being forcibly given psychiatric treatment with confinement in an asylum. What he does and what finally turns out due to his endeavours is the remaining part of the story which is completely unbelievable. 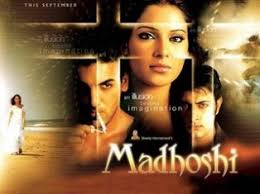 I have read that this story is a take on the Hollywood movie – A Beautiful Mind (2001) and people also contrast it with another Hollywood movie – Face Off (1997). However I beg to differ. Except the issue of hallucinations, Madhoshi does not have anything in common with A Beautiful Mind. Nor does it have anything in common with Face Off except the matter of plastic surgery of one’s face. In fact, partial similarity is there with the story of a very old Hindi movie – Yeh Vaada Raha (1982) starring Rishi Kapoor, Poonam Dhillon and Tina Munim in lead roles.

The crux of this movie is made clear in its tagline itself which reads – ‘An illusion beyond imagination‘. The only question that emerges that whether the plot idea itself makes sense and whether an illusion can go to such an extent that it’s beyond anybody’s belief. Well, we know the power of the subconscious mind of human-beings. If it cannot really materialize the things thought and dreamt of, then it can make them real at least for the person concerned through his / her illusions. A disturbed mind strives for relief and if an illusion provides the necessary relief, it can take place for the disturbed one howsoever far-fetched it may appear. That’s my view.

However I completely disagree with the plastic surgery (or cosmetic surgery by whatever name we may call it) shown in this movie and its reversal too. I may be ready to believe that an extra-ordinarily skilled plastic surgeon may change a person’s face in such a way that it becomes the face of another known person but I can never believe that once done, such a surgery can be reversed to bring the original status of the face. That’s been shown in this movie which is nothing but ridiculous and mocks the art of plastic surgery.

The name of the movie is inapt. Originally it was titled as Mumkin (possible) but later on, perhaps considering the sex-symbol image of the heroine (Bipasha), the makers changed the title to Madhoshi (ebriety / inebriety / intoxication). The story has nothing to do with the title though the lyrics of a song (the title song) can be linked to this title to justify it.

The movie entertains and engrosses the viewer in the first half which is very well directed. Just watch this movie without prejudices and you won’t get bored even for a moment in the pre-interval session. The trouble comes with the advent of the post-interval session whose screenplay could not be written interestingly. The scenes of Anupama in the asylum are very difficult to tolerate and the climax involving the plastic surgery issue is a complete letdown leaving a feeling of having been cheated in the viewer. The final scene, unfortunately, reduces the whole movie to a laughing stock.

The way the movie starts and progresses up to the interval point as well as a few scenes after that, the suspense element should have been there to keep the viewer glued to his seat. However the tagline itself destroys the suspense in the story whatsoever. Hence the narrative does not remain intriguing as to whether Aman is real or imaginary. The director has tried to confuse the audience in this regard in the final shot also which is a completely useless effort by him.

Despite the profoundness of the subject and the treatment given to it, the movie presents healthy comedy also in its first half. The painting class scenes involving Anupama and her close friend Shabnam (Shweta Tiwari) as well as the scenes of the first meeting of Anupama and Arpit and thereafter Arpit’s remembering her while being in his home are nothing short of laugh-riots. And they are able to generate plenty of laughs sans any use of vulgarity which is a very commendable thing in my opinion.

Being an ardent fan of Bipasha Basu, I admire her looks as well as acting. However objectively speaking also, this is her movie only with both the heroes only supporting her role. She has performed excellently and turned her unusual role into a believable one. She appears overweight though. Both John Abraham and Priyanshu Chatterjee have done well. Especially Priyanshu proves that he is a very natural actor. TV actress Shweta Tiwari has got a meaty role and she has generated ample laughs for the audience by her innocent mannerisms (today is her birthday). The complete supporting cast is well in place.

Roop Kumar Rathod’s music is good, at least in my opinion. I like Yeh Ishq Hai Gunaah To Gunaah Karke Dekhiye sung by Sukhwinder Singh and Sunidhi Chauhan whose beautiful lyrics have been penned by Shakeel Aazmi. Pyar Ka Khumaar Leke, Chale Bhi Aao Kahaan Chhupe Ho and the title track are also nice to listen.

As asserted above, this movie does not appear to be a copy of another known Indian or foreign movie to me or to be straight, this fact is beyond my knowledge till date. However the theme of this movie appears to have inspired a Hindi movie that came a couple of years after this movie. That much acclaimed and commercially successful movie is Lage Raho Munna Bhai (2006). Believe it or not, the basic grains of both these movies are the same though on surface they appear to be entirely different stuffs.

Despite the fact that Madhoshi not only badly flopped but also was torn apart by the viewers and the reviewers alike, I am recommending it because I like it and despite flaws, do not consider it as something like trash. Since Lage Raho Munna Bhai was a huge box office hit and got great critical acclaim as well, I advise those who have seen Lage Raho Munna Bhai to watch Madhoshi and contrast these two movies in terms of the basic story idea.