The whole is not better than the sum of its parts

Posted on September 21, 2017 by Jitendra Mathur

During my attempts for the Indian Civil Services during the nineties, I got an opportunity to study Sociology as my optional paper and through that I came to know of the theory of Structural Functionalism. This theory describes society as a structure whose different parts carrying out separate functions, work harmoniously to ensure stability and proper functioning of the system as a whole. That means the whole is much more than the sum of its parts. It has an identity of its own, a soul of its own. The parts are known through it. It’s not known through its parts.

For a movie which is a source of wholesome entertainment, the same theory can be applied. If a movie is to be considered good, it should qualify for that as a whole. If certain (or even all) parts of the movie are good but they do not work in tandem with complete consistency and harmony to provide a satisfactory experience to the spectator, the movie cannot be admired in its entirety. This is what has happened with Agent Vinod (2012). It has great action and thrill, a very good entertaining song (in the style of Bollywood during the sixties to the eighties), admirable performances from the lead actors and finally a very good story with an impressive climax lasting for 20-25 minutes. There are many skilfully executed scenes in the movie (alongwith certain childish sequences as well). All the same, I won’t consider it as a brilliant entertainer. It’s just an above average movie, something that we did not expect when a talented director like Sriram Raghavan was behind the camera and a talented actor like Saif Ali Khan was in front of the camera. It’s a let down from the Saif-Raghavan duo who had earlier delivered a brilliant thriller – Ek Hasina Thi (2004) from the Ram Gopal Varma Camp. 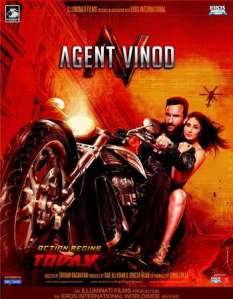 Agent Vinod, as the name suggests, is the story of an agent of the Indian Intelligence (RAW, to be precise) who gets an assignment to dig out the circumstances in which another agent (Ravi Kishan) had lost his life. The investigative and daredevil activities of this agent, Vinod (Saif Ali Khan) brings him into contact with a pretty but daredevil (like him) girl, Iram Parveen Bilaal (Kareena Kapoor). There are several baddies in the scenario, coming across whom the adventures of these two unearth the plot of a nuclear explosion. Finally, the hero succeeds not only in preventing the nuclear explosion but also in reaching the real planner of these events whose wicked activities are hidden from the eyes of the world. 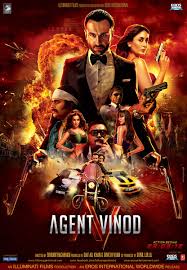 The narrative of Agent Vinod moves through several countries (even my counting failed) and contains several blows and counter-blows between the goodies and the baddies with countless heads rolling in the process. As per my understanding, the intelligence agents or the spies are trained in such a way that they rise above emotions and not moved by mishaps in the lives of the individuals (whether in own life or in the lives of the other ones). However our filmwaalas are yet to come out of the earlier era and the old-fashioned sentimental twists are still kept to tone down the profoundness of the story (and play with the sentiments of the Indian viewers as well).

A few years back, when the director of small yet impressive movies, Anubhav Sinha had been assigned the direction of a multi-starrer, big-budget movie – Dus (2005); nobody expected him to come good. However Anubhav startled all and sundry with his efficient work and handled the large canvas of the script alongwith the high profile cast very well. Sriram Raghavan who had earlier directed praiseworthy thrillers like Ek Hasina Thi (2004) and Johnny Gaddar (2008) could not follow suit through Agent Vinod. The narrative is fast-paced, no doubt but this pace does not allow the viewer to understand the movement of the story and the meaning of different things shown on the screen in a proper way. Events running on the screen are known to the director because the film is nothing but a realization of his vision only. However my dear Mr. Sriram Raghavan, they should be understood by the audience too whom the movie is ultimately meant for. And that’s why when the mastermind is unmasked in the ending reel, it does not look convincing because even the most intelligent and logical viewer cannot connect him to the baddies that had already come before him in the movie (and cannot make out the connection of the baddies among themselves also). Should we believe that a sovereign country like Pakistan and its intelligence wing, ISI work for an individual who has his own axe to grind through their operations ? Too far-fetched. Putting it straight, the many good parts of the movie do not act together to make the movie impressive and entertaining as a whole. 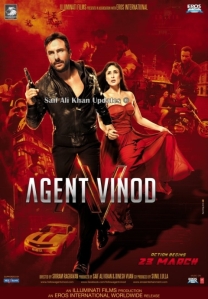 There are unnecessary references to several old movies and actors in this movie including the old Agent Vinod (1977). There was no need for that and presenting an altogether new movie without any type of deja vu would have been better on the part of the director. These superfluous references only underscore the lack of maturity of the filmmaker.

The movie boasts of a huge production value and the different locales of the many countries involved have been portrayed beautifully on the screen. Technical aspects are superb except the editing part. The movie is just too long and that’s why starts boring the viewer. It should have been short by at least 15-20 minutes. Action sequences and thrills (especially in the final reels) are the essence of the movie. The final phase of the movie (final 20-25 minutes) is the most interesting and gripping part of it.

As far as the music composed by Preetam is concerned, it’s according to the mood of the movie. I won’t term it as excellent. Only the Mujra song picturized in the old fashioned way is impressive in listening to as well as watching on the screen. And quite interestingly, Maryam Zakaria looks better than Kareena Kapoor in that song.

Performances are praiseworthy. Saif Ali Khan is a very good actor who has groomed himself to such an extent that he can fit the bill for any role. He is the heart and soul of the movie and the movie deserves a watch by his fans. The dialogue writer has done a commendable job by inserting a sense of humour in his daredevil persona. Today’s birthday babe Kareena Kapoor has also done well alongwith her pretty looks though her character confuses at many places. She dies in the end because our filmmakers are still not gutsy enough to show an Indian Hindu male marrying a Pakistani Muslim girl. The supporting cast is routine. However it’s painful for me to see a highly talented actor like Arif Zakaria being wasted in a role akin to that of a junior artist (in the ending sequence).

My final words – Agent Vinod is strictly a one time watch and that too for the action-loving audience. It’s a collection of good parts which do not sum up to a coherent whole. Frankly speaking, this movie, in its major part, is just like a jigsaw puzzle which instead of entertaining the viewer, leaves him mentally exhausted in trying to join its pieces together in the correct way.