Posted on September 18, 2017 by Jitendra Mathur

Vidhu Vinod Chopra is known today as a respected and high-profile filmmaker who has not only directed movies like Parinda (1989), 1942 – A Love Story (1994), Mission Kashmir (2000), Eklavya (2007) etc. but also made good quality movies giving chance to the other directors for their direction viz. Munnabhai MBBS (2003), Parineeta (2005), Lage Raho Munnabhai (2006), 3 Idiots (2009) etc. Recently I came across a movie directed by him much before his other high profile and better known movies. It’s a murder mystery and belongs to his initial years in Bollywood when he used to write his name as ‘Vidhu Vinod’ only (without suffixing his surname – ‘Chopra’). This movie is Khamosh (1985). 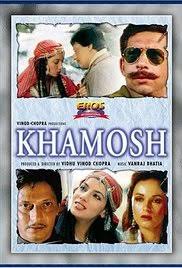 Khamosh (silent) is a murder mystery which tells the story of a film-unit shooting in Pahalgaam (Kashmir). The movie is titled as ‘Aakhri Khoon’ (the last murder). Amol Palekar who is also a politician (besides being an actor) is the hero, Shabana Aazmi is the heroine, Sadashiv Amrapurkar is the director, Ajit Vachchhani is the producer and several supporting actors alongwith the writers and technicians are also there on the shooting location. They are all staying in a hotel named as Hotel Pahalgaam. There is a fall and a lake nearby alongwith a boat-house. A supporting actress of the movie – Soni Raazdan goes to the boat-house at night to cram her dialogues for the scene whose shooting is scheduled to take place the next day. However her dead body is found as hanging from a tree the next morning. Now starts the suspense. A so-called CBI officer – Nasiruddin Shah arrives there and starts interrogating the crew members of the movie as well as examining their hotel rooms and investigating the other relevant things. Soon it is known that he is an imposter. He is actually the brother of the murder-victim, trying to unmask the murderer of his sister. Before the efforts of himself as well as the local cops made in this direction bear any fruit, another murder takes place which is of another character artist – Sushma Seth. Nasiruddin Shah feels that many crew members know something in this regard but they are silent (Khamosh) due to one reason or another. When a waiter of the hotel is first known to be missing and thereafter his dead body is found from the flowing water of the fall, the mystery deepens like anything. And then the producer – Ajit Vachchhani and his abnormal younger brother – Pankaj Kapoor also lose their lives. The culprit is finally unmasked in the climax.

Khamosh deals with the issue of casting couch prevalent in the film industry (of India) where the young girls who are aspiring to become film heroines are subjected to sexual exploitation by those (directors, producers, writers, heroes etc.) who claim to boost their career. It’s a vice widespread in the show business and Vidhu Vinod Chopra being a part of this field, could portray it properly. Moreover, the fact that many people in this line satisfy their perverted desires under the subterfuge of filmmaking has also been shown realistically. It is an old-fashioned mystery though.

The treatment of the murder-based plot is impressive and at places, quite spine-chilling for the viewer. I watched it on computer but those who might have watched it in theatre must have felt a chill running down their spine during a couple of scenes. The movie is slow in the beginning but once the first murder takes place, it picks up speed and proves to be thoroughly engrossing for the spectator.

There are certain Bollywoodish potholes in the script but they cannot be easily noticed or felt upon first viewing of the movie because the viewer is hooked by the mystery. The climax is dragging and should have been shortened. The characters are mostly natural but at certain places over the top also, may be because of the director’s will to show the theatrical impact emerging from involvement in a film-shooting, upon the actual behaviour of the people concerned.

There was no need of any song in the movie and Vidhu Vinod Chopra has shown his better sense by not keeping any songs. The flow of the narrative, therefore, is nowhere blocked by songs. Though Mann Bhanwara is a song of this movie only but I did not find it in the movie. The background score is perfect and adds to the impact of the mysterious environment prevailing in the movie. Vanraj Bhatia is the music director.

Technically, the movie is not superior. The film and the colours used in shooting and developing the shot stuff seem to be of not-so-good quality because the colours have faded in the print available now (used in the CDs as well as uploaded on the internet). Despite the complete shooting being shown in Pahalgaam, the eye-soothing scenes are quite less. Production value is not high. Editing is okay.

Vidhu Vinod Chopra has taken the credit of writing the movie himself though it is said that this movie is inspired by Alfred Hitchcock’s classic mystery – Psycho (1960). He has christened Amol, Shabana and Soni by their real life names, perhaps to infuse a flare of reality in their imaginary characters involved in the fictional work shown on the screen. He has mocked his own profession (and the attitude of the people in this profession) at many places. This old-fashioned mystery is, in many ways, similar to certain Agatha Christie novels.