Today is the birthday of Saira Banu, the Beauty Queen of Bollywood during the sixties. While conveying my hearty birthday wishes to her, I present this review on this occasion.

In my review of P.G. Wodehouse’s novel – The Small Bachelor, I had written that that novel must have inspired a number of Bollywood movies. The first such movie which strikes the mind while referring to that novel in which the Love Guru of the hero himself falls for the charms of a damsel after following celibacy for a sizable chunk of his life, is Shagird (1967) starring Joy Mukherji, Saira Banu and I.S. Johar in lead roles. 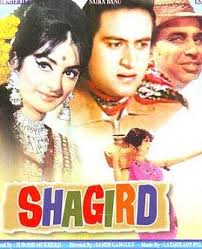 Shagird (disciple) tells the story of Professor Brij Mohan Agnihotri(I.S. Johar) and his disciple (i.e., Shagird) Ramesh (Joy Mukherji). Professor Agnihotri has practiced bachelorhood say celibacy throughout his youth, staying away from the females and taught the same to Ramesh.

Ramesh’s parents are quite unhappy due to his practicing bachelorhood under the influence of the Professor but he keeps on following his mentor or Guru with complete devotion. However one day, the Professor comes into contact with the daughter of his friend who leaves her in his custody while going abroad. This beautiful girl is Poonam (Saira Banu) who is a naive girl.

The professor forgets all his principles and philosophy favoring celibacy the moment he sees Poonam and despite the age-difference between himself and herself, becomes desirous to get her into his life. However his efforts to woo the girl prove of no avail.

On the other hand, Poonam and Ramesh meet each other and fall in love. Ramesh comes to know that his mentor Professor Agnihotri has fallen in love with a girl but he does not know that that girl is none else but his own sweetheart Poonam only.

Now the professor asks Ramesh to help him in his love story and give him some tips as to how to woo the girl. So, now the roles are reversed. The mentor has become the disciple and the disciple has become the mentor. But Ramesh is taken aback the day he comes to know that the girl Professor Agnihotri is after, is his sweetheart Poonam.

Now the scenario is like this that the disciple and the mentor are finding themselves as rivals for the love of Poonam who has become the bone of contention between them. The story takes a final turn when the Professor realizes his mistake and clears the path for Ramesh to unite with Poonam.

However there are some villains in the story to create hurdles in the path of their union. Ramesh finds himself into trouble due to the activities of the villains. Then his mentor, i.e., Professor Agnihotri comes to his rescue and sets everything right. 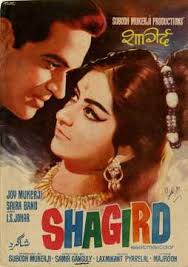 Shagird was the first movie of its kind which creates a lot of laughs for the viewers and entertains them very much. That’s why it was a commercial hit when released. The near perfect inter-mingling of comic and romantic situations enables it to be called a quality rom-com in which comedy supersedes romance.

Later on, many movies were made on the same lines. Shreemaan Aashique (1993) was a remake of this movie and movies like Raju Ban Gaya Gentleman (1992), Partner (2007) and Life Partner (2009) have also been made by drawing inspiration from this classic comedy. 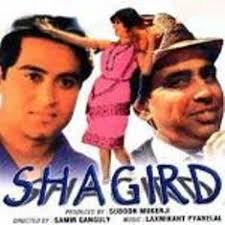 Direcor Sameer Ganguly has presented the script of Subodh Mukherji (a renowned director in his own right) on the screen pretty well and the movie keeps on entertaining the audience relentlessly right from the word ‘go.’

The final few reels are formulaic perhaps because the filmmaker needed a twist and certain routine events to create some drama before taking the story to its desired conclusion. Still there remains no reason to complain after watching the movie.

Technically the movie is quite good. This is a color movie and the beautiful locations shown on the screen are eye-candy for the spectators. The movie is more than two and a half hours long but considering the high entertainment quotient, the length is nowhere felt. 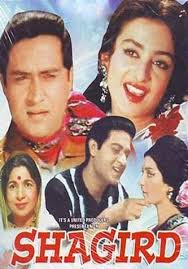 Joy Mukherji and Saira Banu have complimented very well on the screen. Saira Banu has played the role of a naive girl and her naivety is most appealing in the song – Dil Vil Pyar Vyar Main Kya Jaanu Re. However the highlight of this movie is not the on-screen chemistry of Joy and Saira but the on-screen chemistry of I.S. Johar, the mentor and Joy Mukherji, the disciple or the Shagird. Both have done exceedingly well and left no stone unturned in making the audience laugh out loud.

The song Bade Miyaan Deewane Aise Na Bano, Hasina Kya Chaahe Humse Suno is a laugh-riot when watched on the screen with brilliant performances from these two characters who are the pillars of the story. Other cast members are well in place.

Laxmikant Pyarelaal have composed very good music for the movie. Many songs were damn popular in that time (even today) and became chartbusters when this movie was released. Other than Dil Vil Pyar Vyar (by Lata) and Bade Miyaan Deewane (Rafi), Woh Hain Zara Khafa Khafa (Lata), Ud Ke Pawan Ke Sang Chalungi (Lata) and Duniya Paagal Hai Ya Phir Main Deewana (Rafi) are also quite good. Devotional song sung by Lata – Kaanha Aan Padi Main Tere Dwar is also impressive. The beautiful and meaningful lyrics of the songs have been penned by Majrooh Sultaanpuri.

Summing up, Shagird is a complete value for money movie. Nice timepass. Non-stop entertainment for 157 minutes. The director deserves full marks because making such an impressive comedy is no easy job. I unconditionally recommend Shagird to all the entertainment-seekers.

The link of my review of The Small Bachelor is :
https://jmathur.wordpress.com/2016/12/16/bachelor-booooo/