Jangal Mein Mangal (merrymaking in a forest or to be exact, a deserted place) is an entertaining movie which I am reviewing due to the inspiration of my dear friend and esteemed reviewer Mazhar Nawaz. Sincere thanks Mazhar Bhai for encouraging me to pen the review of this underrated and forgotten entertainer of the seventies. 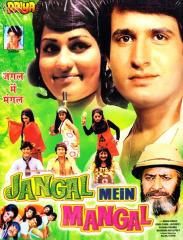 Jangal Mein Mangal (1972) is a movie set completely in a forest (practchandru021y at Periyaar wildlife sanctuary, Thekkadi, Kerala) where two different groups of students reach a common Govt. guest house. One group contains all male students led by a strict disciplinarian – (retd.) Colonel M.K. Das (Pran) and the other one contains all female students led by equally strict disciplinarian – Professor Laxmi (Sonia Saahni). Quite naturally, romantic and comic encounters are there between the two groups as well as between their male-female leader duo. But the rom-com is intermixed with a crime thriller also containing smuggling and murder tracks. After losing one beloved member from each group, the male-female groups are able to unmask the culprits.

Jangal Mein Mangal starts very interestingly with animation pictures alongwith which the credits appear on the screen. And the entertainment starts immediately after the credits end, with the entry of the caretaker of the Govt. guest house (Paintal) who welcomes the female group. Promptly thereafter the female group comes across the male group and the colourful interactions take the viewer into their grip.

Since there are two groups of students shown, the movie contains a plethora of characters. Pran is all-pervasive, for quite surprisingly and interestingly, he has been given a double role. Alongwith the leader of the male group – Colonel M.K. Das, he has played the role of a student in his group too, named as Raghu. Though young romantic pair of Kiran Kumar and Reena Roy is there, in my opinion, the script is the hero in this movie and not any character. There are many twists and turns in the movie which does not bore the viewer at any place. The horror, suspense and thrill has been kept intact for the ending reels and the major part of the movie has been dedicated to the rom-com, containing teasings, games and songs. The scene in which love sprouts between Colonel Das and Professor Laxmi tickles all the romantic hearts.

On the flip side, the villains seem to be outdated and over the top. Some characters are just like caricatures and some sequences (especially the sequence of the boys disguising themselves as girls and mingling with the girls) are not reliable. However since they serve the purpose of comedy, the director can be excused for them. Overall, the direction of Rajendra Bhatia is strictly okay and the script seems to be better than the direction. The murders in the final reels seem to be unnecessarily imposed on the story and they could have been avoided. The revelation of the identity of the murderer (who has been shown as scaring the forest-guests by masquerading as a ghost) does not spring any surprise which is the weakness of the direction. 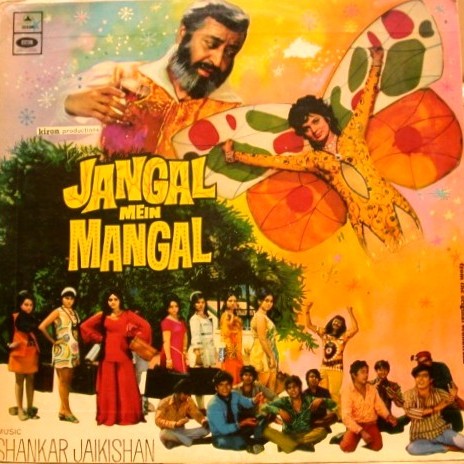 Shankar-Jaikishan with the help of amusing lyrics of Hasrat and Neeraj, have composed hilarious music for the movie which is in perfect sync with the mood of the movie. Kishore’s romantic song – Tum Kitni Khoobsurat Ho, Ye Mere Dil Se Poochho is definitely the best song of the album. However Aye Baag Ki Kaliyon Sharam Karo & Aawaara Bhanwaron Sharam Karo are a treat to watch on the screen. Other songs are also good. I personally like Kal Ki Na Karo Baat sung by Kishore Da very much.

Pran has got the maximum footage in his double role and this villain of yesteryears has excelled like anything. He has won the audience’s heart with two different kinds of performances in two entirely different roles – one of an old man and one of a young man. The complete youth brigade of the movie (Kiran Kumar, Narendra Nath, Reena Roy, Meena T., Jayshree T. and likewise) alongwith Sonia Saahni have done pretty well. Paintal is also good. Meena Roy (played the role of a nun accompanying the girls’ group), Chandrashekhar and Bharat Kapoor have also done satisfactorily. The baddies are disappointing. However a legendary actor like Balraj Saahni has been wasted in the role of an imprisoned Christian priest who is also the father of the nun. 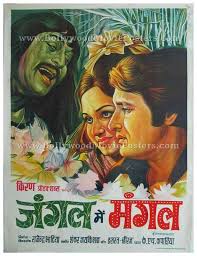 Jangal Mein Mangal is a long forgotten movie which provides wholesome entertainment in the style of Bollywood during the seventies. It’s a spicy masala flick which is a treat for a typical Bollywood movie viewer. I wholeheartedly recommend this movie to all the entertainment-seekers. Come on, join the characters of the movie in Jangal (forest) and go for Mangal (enjoyment) with them.

12 Responses to Merrymaking in forest