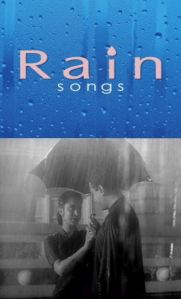 It’s rainy season in India and rains have always been a source of romance, love and emotion for the Bollywood filmmakers. So several great songs have been created in films that fill the male-female hearts with the fragrance of romance and feelings for the opposite sex. However, rains are related to Indian agriculture too. So memorable songs have been created in that perspective also. In this review, I am presenting some memorable Hindi songs created with rain or the rainy season (Saawan) as the backdrop.

I have not included a great song – Pyar Hua Ikraar Hua (Shri 420 – 1955) in this list because I have already included it in my review of romantic Hindi songs.

1. Aha Rimjhim Ke Ye Pyare Pyare Geet Liye, Aayi Raat Suhaani Dekho Preet Liye (Usne Kaha Tha – 1960) : This song is the numero uno in the list of my favourite rain songs. It’s a lovely duet of Talat Mahmood and Lata Mangeshkar which is picturized on Sunil Dutt and Nanda. Shailendra is the lyricist and Salil Chaudhary is the composer. This movie has been made on an immortal story from the Hindi literature, penned by the legendary Hindi literator – Pandit Chandradhar Sharma Guleri. I advise all the melody-lovers as well as literature-lovers to watch (not just listen) this song. You will find the experience as unforgettable and would love to watch this song again to feel the fragrance of the Indian soil in the rainy season, filled with jolliness, enthusiasm and love.

2. Hariyala Saawan Dhol Bajaata Aaya (Do Bigha Zameen – 1953) : As I have said earlier, rains are inseparably associated with Indian agriculture and therefore, it is a source of immense joy for the rural folk, especially peasants. This song is a great song which represents the joy of the Indian villagers when the season of Saawan knocks their doors. It’s a highly melodious and foot tapping song written by Shailendra and composed by Salil Chaudhary. It’s in the voices of Lata, Manna De and chorus. This great song adds to the greatness of the immortal classic movie of Bimal Roy.

3. Barsaat Mein Humse Mile Tum Sajan Tumse Mile Hum Barsaat Mein (Barsaat – 1949) : The memorable song in Raj Kapoor’s super hit movie, the everlasting magic created by the team of Shankar-Jaikishan, Shailendra and Lata (with chorus). Watching this song on screen is also no less an experience which is picturized on debutant Nimmi and others with Raj Kapoor and her beau Prem Nath watching from the background.

4. Zindagi Bhar Nahin Bhoolegi Woh Barsaat Ki Raat (Barsaat Ki Raat – 1960) : The evergreen song of Rafi (also sung by Lata in the movie), sung by Bharat Bhooshan in the movie for the unforgettable drenched beauty of Madhubala, the venus of the Indian screen. It’s penned by Sahir Ludhianvi and composed by Roshan.

5. Saawan Ke Jhoole Pade, Tum Chale Aao (Jurmaana – 1979) : Lata’s great song, penned by Anand Bakshi and composed by Pancham Da (R.D. Burman), picturized on Rakhee. The words and the melody both are great. It’s based on the classical Raag Pahaadi.

6. Saawan Ki Raaton Mein Aisa Bhi Hota Hai (Prem Patra – 1962) : A heart-soothing duet of Talat and Lata from the classic movie of Bimal Roy, picturized on Shashi Kapoor and Saadhna. Lyric’s credit goes to Gulzar and the great melody is the creation of Salil Chaudhary. It’s a song filled with the gusto emerging in the lovers’ hearts in the nights of the rainy season.

10. Umad Ghumad Kar Aayi Re Ghata (Do Aankhen Baarah Haath – 1957) : A very beautiful lyric penned by Bharat Vyas and composed by Vasant Desai which depicts the gusto and happiness of Indian peasantry with the arrival of thick clouds which create a hope of good rainfall and consequential good crop. It’s an underrated excellent duet of Lata and Manna De.

12. Ek Ladki Bheegi Bhaagi Si, Soti Raaton Mein Jaagi Si (Chalti Ka Naam Gaadi – 1958) : One of the best and most popular songs of Kishore Da, penned by Majrooh Sultanpuri and composed by Sachin Da (S.D. Burman). Kishore Kumar not only sang it but virtually immortalized it by performing marvellously on the screen too, singing for his lady-love Madhubala.

15. Chhatari Na Khol, Ud Jaayegi, Hawa Tez Hai (Do Jhooth – 1975) : A jovial, naughty and teasing duet of Usha Mangeshkar and Kishore Kumar, written by M.G. Hashmat and composed by Shankar Jaikishan (in fact, by Shankar only because Jaikishan had passed away some years back). This song has been picturized on Moushumi Chatterjee and Vinod Mehra and very pleasant to watch as well as to listen.

16. Saawan Ka Maheena Pawan Kare Sor (Milan – 1967) : An evergreen duet of Lata and Mukesh, picturized on Nutan and Sunil Dutt, penned by Anand Bakshi and composed by Laxmikant Pyarelal. The situation is that Sunil Dutt is teaching Nutan how to sing. The performances of actors have made it all the more sweet.

18. Ghar Aaja Ghir Aaye Badra Saanwariya (Chhote Nawab – 1961) : R.D. Burman composed this great classical song in his maiden venture of composing music. Shailendra has penned it and Lata has sung it with the flare of Hindustani classical music. Picturized on Ameeta. It’s based on Raag Malgunji.

19. Ajahun Na Aaye Baalma, Saawan Beeta Jaaye (Saanjh Aur Savera – 1964) : A classical duet by Rafi and Suman Kalyanpur in the music direction of Shankar Jaikishan. This song is based on Raag Peelu and the emotional lyric has come from the pen of Hasrat Jaipuri. This song has been picturized on Mahmood and Shubha Khote.

20. Lagi Aaj Saawan Ki Phir Wo Jhadi Hai (Chandni – 1989) : Originally I wanted to include this song in my list of sad songs but I am including it here because I feel that it’s a timeless emotional song with the backdrop of rain, hence should be a part of this list only. It’s a song very close to my heart, sung by Suresh Wadkar and emotionally performed by Vinod Khanna on the screen. The highly emotional, pain-soaked words have been written by Anand Bakshi and the melancholy-filled melodious composition has been done by Shiv-Hari (the legendary Santoor player Pandit Shiv Kumar Sharma and the legendary flute player Pandit Hari Prasad Chaurasiya). Yash Chopra has picturized this song with a great intensity of emotion, emerging straight from the depth of a broken heart.

Some additional rain songs which are really memorable are as follows :

1. Jaa Ri Jaa Ri O Kari Badariya (Azaad – 1955) : Lata’s pure classical song whose lyric has been written by Rajendr Krishna and composition has been made by C. Ramchandra. It’s picturized on Meena Kumari.

2. Garjat Barsat Saawan Aayo Re (Barsaat Ki Raat – 1960) : A classical song based on Raag Gour Malhar, sung by Suman Kalyanpur and Kamal Barot, written by Sahir, composed by Roshan and picturized on Shyama and Ratna.

4. Tum Bin Sajan Barse Nayan Jab Jab Baadal Barse (Gaban – 1966) : A touching song which conveys the pain of separation of the loving couple when the rainy season is on. Picturized on Saadhana and Sunil Dutt, this song has been sung by Lata and Rafi. Lyric of high literary value penned by Shailendra has been composed by Shankar Jaikishan.

6. Rama Rama Ghazab Huyi Gawa Re (Naya Zamana – 1971) : A song by Lata, picturized on Hema Malini being drenched in rain (perhaps to exasperate her sex appeal), penned by Anand Bakshi and composed by S.D. Burman. It’s still remembered for the on-screen performance of Hema Malini.

8. Tumhen Geeton Mein Dhalunga, Saawan Ko Aane Do (Saawan Ko Aane Do – 1979) : A very sweet duet sung by Kalyani Mitra and Jaspal Singh, picturized on Zarina Wahab and Arun Govil. The heart-touching lyric has been written by Gauhar Kanpuri and the melodious tune is the composition of Rajkamal.

9. Jhirmir Jhirmir Saawan Aayo (Payal Ki Jhankaar – 1980) : A melodious rain song containing the fragrance of the Indian soil whose beautiful words penned by Maya Govind have been strung into heart-conquering composition by Raj Kamal. Sulakshana Pandit, Anand Kumar and chorus have sung it and Komal Mahuvakar, Alankar and others have performed on it.

11. Megha Re Megha Re, Matt Pardes Ja Re (Pyaasa Sawan – 1981) : A very romantic duet in rain sung by Lata Mangeshkar and Suresh Wadkar and filmed on Moushumi Chatterjee and Jeetendra. Santosh Anand’s lyric has been composed by Laxmikant Pyarelal.

14. Parbat Se Kaali Ghata Takraai (Chaandni – 1989) : I missed to include it in my review of rain songs. Sridevi and Rishi Kapoor have performed brilliantly on the mesmerizing voices of Asha Bhonsle and Vinod Rathod. Music maestros – Shiv-Hari have composed the melody for the lyric of Anand Bakshi.

Finally, I feel that the classic romantic song of Kishore Da – Roop Tera Mastana, Pyar Mera Deewana, Bhool Koi Humse Na Ho Jaaye (Aradhana – 1969) (which got omitted from my review of romantic songs) can also be linked to rainfall because it takes place in the situation of a rainy night. It’s a composition of S.D. Burman with the lyric coming from the pen of Anand Bakshi. Rajesh Khanna sings it for his lady-love Sharmila Tagore in the movie.

A Chartered Accountant with literary passion and a fondness for fine arts
View all posts by Jitendra Mathur →
This entry was posted in Music Review and tagged rain songs. Bookmark the permalink.

16 Responses to Indian rains ! How romantic !