Because they swapped wives

If someone has really given Surendra Mohan Pathak a run for his money in the field of Hindi pulp fiction of crime-detection genre for around 25 years, it’s Ved Prakash Sharma. Ved Prakash Sharma, an ordinary person from Meerut (U.P.) with a modest education, not only wrote many bestseller Hindi novels but some of his novels were adapted for Bollywood movies also viz. Bahu Ki Aawaaz (1985) and Anaam (1993). Moreover, he himself wrote screenplays and dialogues of Akshay Kumar starrer movies like Sabse Bada Khiladi (1995) and International Khiladi (1999).

Initially Ved Prakash Sharma used to pen crime-detection and thriller novels under his regular Vijay-Vikas series only. However after graduating in this field for a few years, he created some lead characters of different types. One such character is Vibha Jindal whom he has established as the head of a big industrial house with a keen interest in resolving mysteries related to crime. The writer has portrayed Vibha, now a widow and mother of a grown-up son, as his college buddy and first love. And on this ground, in the novels of Vibha Jindal series, the author himself alongwith some of his family members too, remains present and shows himself as taking active part in the investigative activities going on in his story.

Mr. Sharma has written total four novels taking Vibha Jindal in the lead role of the detective. Though all four are very good, I consider the novel under this review as the best one of this series. In this novel, not only the consecutive murders keep the reader hooked but the interactions of the author himself and his son – Shagun (being characters of the novel) with the lady-detective, Vibha add optimum spice to the narrative, making the reading a very very delicious one. 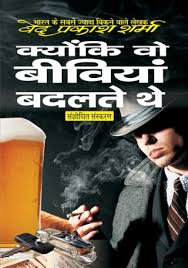 Kyonki Woh Beewiyaan Badalte Thay (because they swapped wives) contains a series of murders of sons and daughters-in-law of big business families in Delhi. Since the daughter-in-law of Bajaj family – Chaandni is the friend of Shagun (author’s son), she approaches the author, requesting them to pursue Vibha Jindal to investigate this case (because Vibha has earned a name not only in the field of business and industry but crime-detection also and she commands a respect in the top brass of the police department as well). How Vibha investigates the case with the author and his son forms the major part of the novel and the murderer turns out to be someone whom the reader cannot think of even in the wildest of his dreams.

The author has dared to disclose the reason behind the murders of the high profile victims in the title of the novel itself (Because they swapped wives). Despite knowing the reason behind the killings of the victims even before reading a single word of the novel, the reader remains spellbound throughout the 360 pages long narrative. The author gets the reason behind the killings clarified just before the climax from the mouth of one of the characters but the reader knows it beforehand. The beauty of the narrative is that despite this knowledge, his curiosity in the story does not get diluted, it only thickens and deepens. There is no boring sequence in the novel and the reader feels to lose his existence and amalgamate with that of the characters of the story.

I don’t know whether the phenomena of wife-swapping (and husband-swapping) as portrayed by the author in this novel is actually there in the Indian (high) society or not. However this novel is damn interesting and despite some events not being very convincing, provides very good entertainment. It is definitely a very big treat for the Hindi readers of crime-detection genre.

A Chartered Accountant with literary passion and a fondness for fine arts
View all posts by Jitendra Mathur →
This entry was posted in Book Review and tagged Book Review - Kyonki Woh Beewiyaan Badalte Thay (by Ved Prakash Sharma), Vibha Jindal. Bookmark the permalink.

5 Responses to Because they swapped wives