It’s the time of wee hours in India and it’s raining outside in Hyderabad. What can be a better situation to write a review of this movie which begins with the scene of heavy rainfall and that scene itself lends momentum to the mystery of the movie ? The opening scene picturized upon Saadhana and Manoj Kumar in heavy rainfall is itself so impressive that the viewer gets compelled to watch the full movie. Perhaps in no other Indian suspense-thriller, the opening scene is that much impressive. Manoj Kumar driving home in heavy rainfall finds Saadhana standing in the middle of the road, wearing a white saari and getting drenched without apparently unaffected by this fact. Mysterious dialogues take place between them and finally Manoj Kumar drops her near a graveyard and gets spellbound to see her disappearing in it with a highly melodious song echoing inside – Naina Barse Rimjhim Rimjhim. The spellbinding suspense starts now for the next two and a half hours. This classic mystery from Bollywood is Woh Kaun Thi ? (1964). 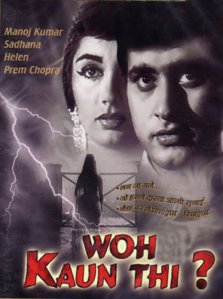 Woh Kaun Thi ? (who was she ?) is a black and white movie released in 1964 starring Manoj Kumar and Sadhana. It is still considered a classic mystery. In fact, its being black and white is a plus point of this movie as the mystery appears to be deeper with the characters appearing on the screen looking more mysterious than they actually are. The great music composed by Madan Mohan rendered further strength to the suspense and thrill of the movie and Saadhana in the title role delivered a splendid performance to make this movie totally spellbinding for the viewers. 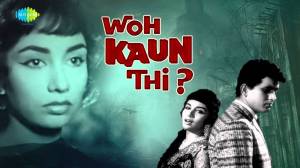 I have already discussed the highly impactful opening scene. The story moves quickly with the fact coming out that our hero, Manoj Kumar is a doctor, working in the hospital of K.N. Singh and having a love affair with Helen. Shortly Helen gets murdered and the mysterious woman, Saadhana who had disappeared in the graveyard in the beginning, reappears before him in a further mysterious fashion only to disappear even more suspensefully. His mother gets him married to a girl of her choice but you can guess that when he sees her face on the first night of their conjugal life (yes, there were times in India when the bride and the groom under an arranged marriage were able to see each other’s face for the first time on that night only), he is taken aback to see the same girl, now as his wife. Then several twists and turns keep on coming in the narrative taking the story to Shimla and the suspense is finally revealed in the climax. 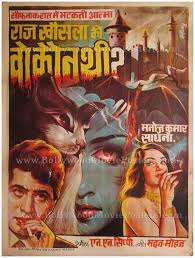 The story is just very very good and Raj Khosla was an able director of his time who directed classic suspense movies like Mera Saaya (1966) and Anita (1967) too. He has handled the plot very well. The problem is with the revelation of the suspense in the climax in which the police officer, Raj Mehra delivers a long speech regarding the mystery and despite that leaves many significant questions unanswered. If you ignore this fact, you won’t find any fault with the movie which contains comedy, romance and melodious music alongwith the gripping mystery. The very first scene grips you like a powerful clamp and then you are so engrossed in the narrative that you can leave the movie after seeing its climax only, not before that.

Saadhana looks so gorgeous in the movie that it’s better for you to watch her instead of reading my narration about her. And acting ? She has delivered a highly admirable performance in the pivotal role. Manoj Kumar is okay. The supporting cast includes Helen, K.N. Singh, Parveen Chaudhary, Prem Chopra, Dhumal, Raj Mehra, Ratnamala etc and all of them have performed their roles pretty well.

Technically also the movie is perfect. The aura of suspense is maintained throughout. The cinematographer has ably captured the snowy beauty of Shimla (in the sixties).

No suspense thriller fan should miss this classic mystery.

8 Responses to Who was she ?