The relation of pain

Sunil Dutt and Nargis were perhaps the most ideal couple of Bollywood who had to face many odds like coming from totally different family backgrounds, difference in career status (Nargis had been a star for years whereas Sunil Dutt was more or less a newcomer), Nargis being elder to Sunil Dutt in age, different religious faiths (which was and still is a big issue in this country marred by communal hatred) etc. against their tying the sacred knot but their love prevailed over every adverse thing and two bodies got merged into one soul. Sunil Dutt who had played Nargis’s son in the legendary Mother India (1957), went ahead to become a star in his own capacity whereas Nargis bid adieu to her career and got totally devoted to her loving family containing one son Sanjay and two daughters, Namrata and Priya. Later on, Nargis started working for social causes too and got nominated to the Rajya Sabha by the President of India as well. Sunil Dutt’s name was never associated with any Bollywood heroine and the unstained love of the couple always remained the foundation of their household.

Just five days prior to the release of their son’s debut movie, Rocky, heavens fell for Sunil Dutt when a demon called cancer snatched his beloved wife from him on 3rd May, 1981. Being an emotional man myself, I can feel the grief of Sunil Dutt and empathise with him as to how he might have felt the pain of losing his Jeevan-Sangini. Out of that intolerable pain or DARD, emerged a movie called Dard Ka Rishta (1982) which is inarguably the best movie of the producer-director Sunil Dutt. Reason ? The narrative came straight out of his heart. His pain of losing Nargis got converted into the story of the movie and he crafted every shot of it with the finesse of an artist who is hurt deep within. 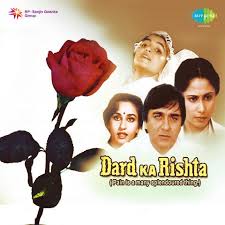 The story of Dard Ka Rishta (relation of pain) revolves around the single-parent child Khushboo whose mother, Reena Roy is dead and she is fostered by her father, Sunil Dutt with the help of the loving and caring servants of the household. Prior to marrying her mother Reena Roy, Sunil Dutt who is a doctor, was married to another doctor, Smita Patil who had left him to continue with her research work in New York when he had decided to be back to his country. All hell breaks loose when Sunil Dutt comes to know that his loving daughter is suffering from leukaemia. How the loving father is able to save the life of his daughter with the help of his ex-wife and her son (who is Sunil Dutt’s son only without his knowledge) is the climax of Dard Ka Rishta.

Dard Ka Rishta is said to resemble a Hollywood movie – Silence Like Glass. But the fact is that Silence Like Glass was made years later than Dard Ka Rishta. Besides, Dard Ka Rishta has an originality of its own because the pain or DARD of the moviemaker was his own which could not be copied or borrowed from anywhere in the world. The film is not outstanding because it contains certain regular Bollywood formulae, yet it works because it moves the viewer. The pain of the father who cannot see his beloved daughter dying, is out and out real. The way he, being a doctor, prays to the almighty for his daughter’s life and the way he speaks the dialogue – Uski Maut Meri Maut Hogi, Mere Profession Ki Maut Hogi (her death will be the death of myself, my profession) is able to shake the viewer who starts praying with the aggrieved father to save child’s life. The development of a new relationship between Sunil Dutt and his ex-wife Smita Patil in the wake of this adversity is also heart-warming. The way Sunil Dutt comes to know that the Smita’s son is actually his, through his enquiry from her about her son’s father, does bring a pleasant surprise not only for him but also for the audience.

The technical and production value aspects are all right. Performance wise talking, Sunil Dutt and Khushboo take the cake. Whereas Sunil Dutt has brought his actual pain of losing Nargis in his expressions, Khushboo as the little daughter has done excellently in all the joyful as well as the serious scenes. Late Smita Patil could never act bad. The other actors including Reena Roy in her cameo and the child artist playing Smita Patil’s son are all okay. 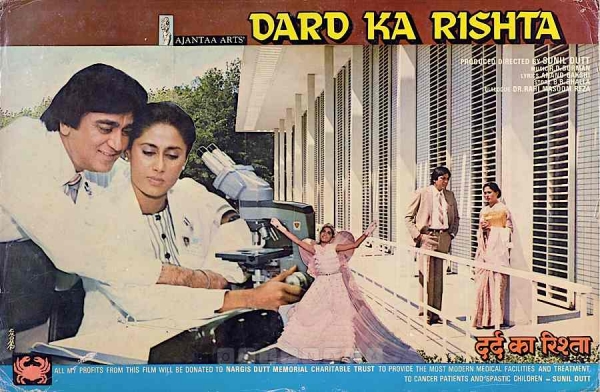 Dard Ka Rishta is a very good movie which works excellently because its narrative has been written not by pen but by the pain in the heart of the moviemaker, therefore, having a DARD KA RISHTA with him. In my personal opinion, the strongest bond between people is the one which is based on the individuals’ pain. Watching, feeling and understanding this movie is a different experience, certainly. If you are a sensitive viewer, Dard Ka Rishta is just for you.

2 Responses to The relation of pain