I am writing a review of this two and half decades old movie simply because I am a mystery fan. This is the only suspense thriller acted in by the screen goddess of Bollywood, Madhuri Dixit who is today’s birthday babe (turned 50 today). It was released in 1991 and due to my fancy for mysteries, I did not waste much time in heading towards the theatre (Priya) with my friend Sanjay Laddha in Kolkata (then Calcutta). It’s a murder mystery on the theme of extra-sensory perception or ESP.

I do believe that there is actually something like premonition or extra-sensory perception as I have experienced it to a very small level in my own life (seeing future events in dreams or imagination). And that’s why the reason of my belief that actually certain persons might be having such a quality at some higher level too. However our Bollywood filmwaalas are always ready to exaggerate anything to the dizzy heights for the sake of their cinematic liberty to present the intended story. So this movie presents premonition or ESP in an unbelievably exaggerated form.

The person possessing this quality in the movie is none else than Madhuri Dixit. In this movie, she is studying in a college in boarding whereas her elder sister, Moon Moon Sen and her uncle, Ajit Vachchhani are living away. Javed Jafferey and Sabeeha are her college mates and Javed loves her in his heart. While playing Tennis with Sabeeha, she suddenly gets the ESP of the murder of a woman. Later on the same scene comes before her eyes with the face of the victim also visible. And she is none else but Moon Moon Sen . However she is still not able to see the face of the murderer (able to see only his back). But the murder actually takes place, however the dead body of Moon Moon Sen is not found.

Some years later, Madhuri comes into contact with Jackie Shroff and love blossoms between them culminating into eventual marriage. Jackie wins the court case of the ownership of a house and when he is out of town for some work, Madhuri moves to that house to clean it and bring it into a worth-living shape for the purpose of their residence. However there she sees many things already perceived by her in the visions coming upon her because of her ESP. And further, the vision of a woman’s murder starts coming upon her, courtesy her ESP only. She decides to save the life of that woman and seeks help of her old mate, Javed Jafferey in her bid for this noble cause. After a lot of chill and thrill, the murder mystery gets resolved.

Actually the name of the movie is Sau Din and it appears in the credits also (written as such on the posters too when the movie had got released) but in English, it is mentioned as 100 Days. I don’t know whether the plot is original or plagiarized from some Hollywood movie. But the thing is that the screenplay has been excellently written. Had the writers and the directors avoided the temptation of some songs and hero-heroine romance, the movie would have been very crisp and thoroughly engrossing. However despite these regular Bollywood formulae including college life pranks and comedy (by Laxmikant Berde), the movie more or less keeps its focus on the real plot only and that’s why it’s so interesting. The editor could have made it shorter by 15-20 minutes and at least one song could have been avoided. All the same, the heartbeat-increasing thrills and the breathtaking suspense keep the viewers glued to the screen without any diversion.

The needle of suspicion points towards at least three characters and it’s not easy to guess the murderer. I had tried to guess in the interval while watching it in theatre but my guess failed. It’s a highly admirable murder mystery, no doubt. For this the director Partho Ghosh deserves a pat on his back. 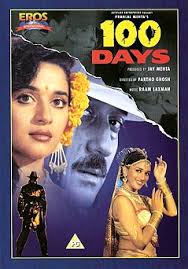 The songs composed by Ramlaxman are good. Especially the song of college boys and girls – Gabbar Singh Ye Kehkar Gaya and the duet of Lata and S.P. Balasubrahmanium – Sunn Beliya Shukriya Meherbani are praiseworthy. The suspense song – Pyar Tera Pyar Kheench Laaya Mujhe sung by Lata and picturized on Madhuri and Moon Moon is also quite impactful in listening to as well as watching.

Technically the movie is good. Production value is high. The narrative grips the viewer from the very first scene and the curiosity factor remains alive till the very end of the movie. Many scenes are simply spine-chilling (if seen in theatre).

Performances are praiseworthy. Dancing queen and extremely beautiful Madhuri has carried this movie on her shoulders alone though she has got able support from others. This is the only movie in which the dancing and action talent of Javed Jafferey has got ample footage. He is awesome and so is the ever-in his-controls, Jackie Shroff. Laxmikant Berde has generated a lot of laughs for audience.

100 Days (or Sau Din) is a very good suspense thriller with the mystery remaining unresolved till the very climax. Good narrative, good performances, good music, good comedy. A perfect entertainment spanning more than two and half hours, full of suspense, thrill and chill. Strongly recommended for all in general and mystery fans in particular.