A classic which is the predecessor to Lagaan

I have got inspiration to write this review without further delay from the views of esteemed blogger and reviewer Sajit Nair (popularly known as ‘hermit‘) on my blog  regarding plagiarism. He has written – ‘General public excuse “biggies” even when they indulge in plagiarism. I endorse this view with my observation that “biggies” sometimes consider it their birth-right to plagiarize. Much acclaimed movie of Aamir Khan – Lagaan (2001) which missed winning the Academy Award in the foreign film categor by just a whisker is a classic example of shameless plagiarizing by the “biggies”. I have come to know that the movies based on original stories are only considered for any award at the Oscars. However our masterminds managed to carry this plagiarized movie to the last stage of Oscars without giving the minimum thanks to the original moviemakers, i.e., the B.R. Films who had made the all time classic movie Naya Daur (1957). Lagaan is a scene to scene (if not frame to frame) copy of this movie. Only the backdrop and set-up have been changed. Not only the basic idea but even the treatment and the characterizations is ditto that of Naya Daur. Had Lagaan won the Oscar, it would have been a classic example of a plagiarized story winning this prestigious and coveted award.

Naya Daur (new era) is originally a black and white movie whose coloured version was released a few years back. It deals with the issue of unemployment because of mechanization in the Indian villages which was very much relevant and burning in that time. Tonga (horse-carriage) driver Shankar (Dilip Kumar) opposes the introduction of bus in the village because of the prospective unemployment of the tonga-drivers. The owner of the bus – Kundan (Jeevan) who is a wealthy businessman of the village enters into a bet with him that if he is able to defeat the bus by his tonga in a race, the bus will be withdrawn. How Shankar prepares for the race and finally defeats the bus by driving his tonga, forms the rest of the story which involves the factor of rivalry in getting the love of Rajni (Vyjayantimala) leading to betrayal of Shankar’s friend, Krishna (Ajit) also. 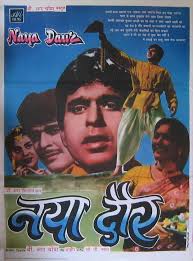 Naya Daur is thoroughly engrossing and very impressive. Legendary director B.R. Chopra has directed the story of Akhtar Mirza quite nicely and maintained the momentum of the narrative throughout the duration of the movie which is a little less than three hours. The sets, costume designing, editing etc. are all praiseworthy. Production value is high, matching the great B.R. Films tradition. 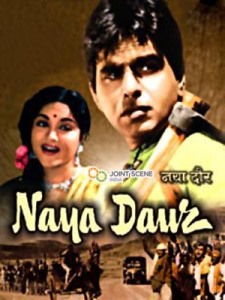 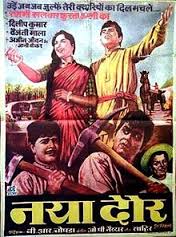 Except the character of Rachel Shelley (the Englishwoman who is the sister of the villain but helping the hero), Lagaan is a ditto of Naya Daur. However neither Aamir Khan nor the writer-director of Lagaan – Ashutosh Gowarikar gave any credit (or even thanks) to the makers of Naya Daur. They left no stone unturned in blowing their trumpet and calling their movie as based upon an original idea. The truth is, they have just changed the bus-tonga race in the village to the Cricket match between the Indian villagers and the English team. Rest the complete story framework, characters, their mutual relationships, situations and climax, everything has been copied outright from Naya Daur.

Though Ravi Chopra (son of B.R. Chopra) said lightly at the time of release of the coloured version of Naya Daur that Lagaan was inspired by Naya Daur, no such accusation has ever been made by B.R. Films upon Aamir Khan Productions perhaps because the makers of Naya Daur were also glad that Lagaan represented India at the Oscars and went very close to winning the Academy Award in the foreign films category. However it was the duty of Aamir Khan and Ashutosh Gowarikar to admit the inspiration (if not plagiarization) and give thanks to the writer and the makers of Naya Daur which they have not done and shamelessly enjoyed the credit of making an ‘original’ movie. However truth cannot be hidden forever. Anybody reading this review can watch these two movies consecutively and he will reach the same conclusion that I reached when I had watched Lagaan for the first time.

6 Responses to A classic which is the predecessor to Lagaan