While serving Nuclear Power Corporation of India, I got transferred from Tarapur Atomic Power Station in Maharashtra to Rajasthan Atomic Power Station in 2001. Just the next day to Makar Sankranti, on 15th January, 2001, I stepped on the land of Rawatbhata for the first time in the morning hours after covering some 50 kilometres distance from Kota by bus. I spent around six and half years there and left finally in July 2007 due to changing job and shifting to Delhi.

This moderately populated town with some small villages adjacent to it, is mostly known for atomic power generation. It is the biggest atomic power generation site in India with 8 units. Rana Pratap Sagar Dam (on Chambal river) is situated there for the support in power generation activity. Since the power is generated through nuclear fission process, a heavy water plant is also situated there because heavy water is used as the moderator for the process. Due to radiation, the atomic power generation site has been kept more than 10 kilometres away from the residential area. There are many colonies situated together (except the Vikram Nagar colony which is on the other side of the Rana Pratap Saagar Dam) and because of the affiliation to atom, the word ANU has been prefixed to the names of most of the colonies.

Rawatbhata is an eye-soothing scenic beauty in the rainy season. Many small seasonal falls start, picnic spots prop up like anything and greenery appears in abundance. Since it is better to approach Rawatbhata via Kota (though it is approachable from Udaipur and Chittorgarh too), one can visit Gapernath Mahadev which is a very old Shiva temple with a small waterfall there whose water falls on the temple itself. But the important thing is that it is at a point more than 100 metres deep from the Earth level and the visitors have to step down through the natural stairs which are quite high.

Once having reached Rawatbhata, the visitor can go to Pahadajhar Mahadev too which is some 10 kilometres away. It is a beautiful place with an ancient Shiva temple near a natural water body.

Just one kilometre away from Rawatbhata is the hundreds of years old Baroli temple (since 9th century A.D.) which is a must visit place for the people interested in places of archaeological importance.

A few kilometres away is Bhainsroadgarh fort. On route to Bhainsroadgarh, the scenic beauty of water on both sides of the road is also a pleasure to see and feel. That area is the Sentab Colony area. However the main attraction in Rawatbhata is Rana Pratap Sagar Dam. Photography is prohibited there and the vehicles cannot be stopped on the dam (which joins the Vikram Nagar colony of RAPS with the town). However it’s a joy to visit this dam and sometimes when due to heavy rainfall, the Dam brims with water, its gates are opened to allow excess water to flow out which provides a heart-conquering scene of overflow (called Chaadar Chalna in local lingo). After crossing it and passing by the Vikram Nagar colony area, the visitor can reach another beautiful dam called the Saddle Dam. In Vikram Nagar, near to the RAPS Guest House, the visitor can see a huge statue of Maharana Pratap on his famous horse – Chetak. 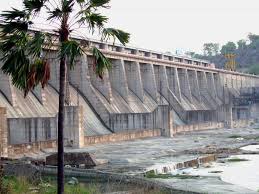 One more picnic spot is just a few kilometres away which is known as Kaala Khet (black farm). It is a private property and for going there, the permission of the owners has to be sought.

In the atomic power plant, outsiders are normally not allowed until and unless they are the plant’s materials suppliers or contractors. However when I was there, a system of allowing employees’ families and guests on Saturday afternoon prevailed.

On the way to the atomic power site, in the village Charbhuja, there is the famous temple of Charbhujanath. Though it is not a fabulous or grandiose one, it bears the fame and religious importance. Devotees would like to visit there for sure. I still remember visiting this place alongwith the nearby Ram temple. However I miss my visit to the small Saibaba temple on the road moving towards the plant where I always got peace of mind. I was also a frequent visitor to the Hanuman temple situated near the Baalaram Chauraha at the heart of the town. One more beautiful Shiva temple – Mukteshwar Mahadev Temple is situated in the Anu Kiran Colony (where I resided for six and a half years in two different residential quarters).

Rawatbhata is not just natural beauty, over the past few years, it has developed itself (unofficially) as a rich bird sanctuary with birds of several scarce species available here. The Durra wildlife sanctuary is also there between Rawatbhata and Kota though the govt. seems to have done little to attract the tourists to that place. Well, whether human-beings become guests of Rawatbhata or not, birds of empteen number of species have already become. Being a nature-lover, I always cherished the company of flora and fauna (especially birds) there.

Rawatbhata is in the Haadoti region of Rajasthan and culturally it is close to Kota. However administratively it is in the Chittorgarh district of Rajasthan. It does not have a railway station. However anybody can reach Kota (or Udaipur or Chittorgarh) by train and then can easily reach Rawatbhata by road. From Jaipur, the capital of Rajasthan, direct bus of Rajasthan Roadways is available for Rawatbhata.

Since it has not been developed by the govt. as a tourist attraction, decent staying facilities are not there. If the visitor is familiar to any employee, he can help him through guest house or other ways. However, the visitor can stay at Kota which is hardly one hour journey by car and then enjoy Rawatbhata and nearby places by hiring a vehicle (or using own vehicle).

One final word about Shreya Ghoshal, the famous playback singer of Bollywood movies. She was brought up at Rawatbhata, spent her complete childhood there only and won the mega final of SA RE GA MA while residing there itself. Her success has stirred up a craze for music in the youngsters of Rawatbhata.

It’s been almost a decade since I left Rawatbhata. However my heart is still there. Tourists are welcome to visit this underrated plateau region during the rainy season and the winter.

12 Responses to Land of Charbhujanath, Atomic Power and Shreya