With my sincere thanks to my dear friend Cattie for inspiring me to pen this review, I pay my tribute to the legendary actress known as Meena Kumari who has become immortal as the only Tragedy Queen of Indian cinema. 45 years have passed since she left for her heavenly abode (on 31.03.1972). 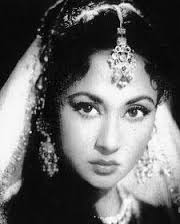 Meena Kumari’s real name was Mahjabeen Bano and she was born on 1st August, 1932. Her father was already struggling in Bollywood and due to the poor financial conditon of the family, she entered the cine-world quite reluctantly as a child artist (rechristened as Meena for movies) at a very tender age of 6-7 years. Her first screen appearance was Leatherface (1939). After acting as a child artist for a few years, she started doing supporting roles and acting as second fiddle to the main female leads. She started getting cast as the main female lead also in a few movies. The first big break of her career was Baiju Baawra (1952) for which she won the first ever Filmfare Award of the best actress. And thereafter she never looked back during the next two decades. She again got the Filmfare Best Actress award for Parineeta (1953) and while winning the award for the third time in her career for Sahib Bibi Aur Ghulam (1962), she created history by getting all the three nominations for this award in 1963 (the other two nominations were for Aarti and Main Chup Rahungi).

Halaaku (1956), Dil Apna Aur Preet Parai (1960), Dil Ek Mandir (1963), Kaajal (1965) for which she won her fourth and the last Filmfare Best Actress award, Phool Aur Patthar (1966), Bahu Begum (1967) etc. were other notable movies of her career. However she is best remembered for playing Chhoti Bahu (the youngest daughter-in-law) in Sahib Bibi Aur Ghulam (1962) which eventually brought the tag of Tragedy Queen for her. She virtually brought the immortal character of the classic novel of Bimal Mitra alive on the screen. Not only this movie is an immortal classic of Indian cinema but also the character of Chhoti Bahu in it. None can forget her passionate love for her husband (Rehmaan) reflected in the song – Piya Aiso Jiya Mein Samaay Gayo Re Ki Main Tann-Mann Ki Sudh-Budh Bhula Baithi as well as her restlessness not to lose his association reflected in the song – Na Jaao Sainyaan Chhuda Ke Baiyaan, Kasam Tumhaari Main Ro Padungi and her platonic as well as highly emotional relationship with the hero – Bhootnath (Guru Dutt). Meena Kumari not just played the character as an actress, she virtually lived it. And perhaps she was destined to have the shadows of that character in her personal life too. The loneliness and grief of Chhoti Bahu entered her own life and unfortunately she also became an alcoholic like her.

The Tragedy Queen was quite skilled in comedy also. Sanam (1951), Azaad (1955), Miss Mary (1957), Kohinoor (1960) etc. are examples of her comic timing and proficiency in hilarious roles. However, she is best remembered for her painstruck and intense roles only.

Filmmaker Kamaal Amrohi was the man in her life but his prime motive seemed to use her services for his ambitious project – Paakeezah whose work had actually started in 1956 but it got completed and released in 1972 just a few days prior to Meena Kumari’s death. Since the relationship from the side of Kamaal Amrohi was mainly based on his selfishness (Meena Kumari was his second wife) it was not to last. They had got married in 1952 and got divorced in 1964. Meena Kumari could not beget any child. Her loneliness brought her closer to first Dharmendra and later Gulzaar but her thirst for love always remained unquenched. 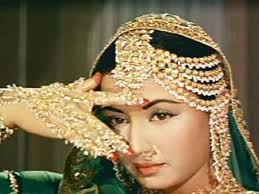 Gulzaar made his debut movie as a producer-director titled as Mere Apne (1971) by casting Meena Kumari in the lead role of an old woman. I consider this movie as one of the greatest movies of Bollywood in which Meena Kumari was again at her very best. Her emotional performance as well as her death in the ending scene of the movie is unforgettable.

Paakeezah was the zenith of her acting career in which due to her ailing condition, her dance numbers (she played a courtesan in the movie) were picturized on Padma Khanna in long shots. Despite her break-up with the producer-director Kamaal Amrohi in the personal life, she proved that she was professionally committed, by shooting for the movie despite her poor health. Sunil Dutt and Nargis had intervened between her and Kamaal Amrohi for bringing them together to complete this movie. Her enchanting performance in that movie was just like the last flare of the fire that’s going to blow out. Her last movie – Gomti Ke Kinaare (1972) got released after her death. She died of liver cirrhosis on 31st March, 1972, being financially weak and totally lonely in her life.

The pain and loneliness in Meena Kumari’s life (and perhaps Gulzaar’s association as well) turned her into a Shaayara (Urdu-poetess). The Deewaan (volume of Urdu poetry) of her Shaayari (edited by Gulzaar only) contains Ghazals and Nazms of such a high quality that the reader may have to wonder that had she been a full-time Shaayara instead of an actress, she would have earned a place among the greatest Shaayars ever. Her pain, tears and throbbing have alighted into her poetry.

While paying my tribute to the legendary actress and Shaayara, I end my review with a SHER (Urdu couplet) authored by herself only :

(The customs keep a strict vigil on my bliss, the heart is surviving on some unknown hope; I swear by the blues glancing from your eyes O friend, the relation of pain is the deepest one).

A Chartered Accountant with literary passion and a fondness for fine arts
View all posts by Jitendra Mathur →
This entry was posted in Movie Personality and tagged Kamaal Amrohi, Meena Kumari, Tragedy Queen. Bookmark the permalink.