Personally I believe that there are only two categories of movies – good movies and bad movies. However in the cine-circles (of Bollywood), there are many other categorizations. One such categorization is A grade, B grade, C grade and the likewise. The movies which do not boast of highly popular (and expensive) star cast and not made by prestigious banners are called B grade movies in Bollywood. Being a mystery-fan, today I am reviewing a long forgotten movie which is a good murder-mystery but was labelled as a B grade movie when released. It’s Kaun ? Kaisey ?? (1983). 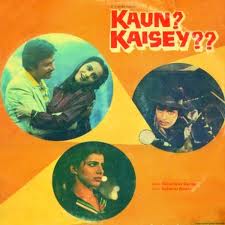 Kaun ? Kaisey ?? (Who ? How ??) is a murder-mystery set in Simla. The murder victim is a carefree and drunkard girl – Roselyne who works in the garment factory of Rakesh Rai (Deepak Parashar) but has a bad habit of shoplifting. In a cold night, when Rakesh’s wife – Renu (Ranjeeta) is out of station, he, while returning from a bar, gives lift to her and brings her to his residence. Since she is willing to have some brandy, he provides a glass of brandy to her and gets excused for going to toilet. When he is back from toilet, he is shocked to find Roselyne as lying dead on the sofa. Frightened, he takes her dead body to a park and leaves it on a bench.

Now the investigating officer – Vinod (Mithun Chakraborty) comes into picture who interrogates and examines several suspects including Rakesh, Renu, Rakesh’s lawyer-cum-close friend – Rajan (Ardhendu Bose), Rakesh’s mother (Rama Sharma), his widow sister (Beena) living with them, Roselyne’s boyfriend – Rodrigues (Prem Kishan), a photographer – Nand (Deven Varma) and Roselyne’s parents (Jaanaki Daas and Shubha Khote). There is a mysterious phone-caller (Bharat Kapoor) too in the scenario. Since Roselyne has died of poison, the puzzle which is there for Vinod to solve is that how could she consume the poison when there was no poison in the bottle of brandy or the water mixed. Hence the mystery is not just of whodunit but howdunit as well. In the climax, the investigating hero is able to resolve both and catch the culprit.

In this murder mystery, it is stressed (right from the title) that howdunit is more important in the given case and if it is known as to how the murder-victim was made to consume poison, the whodunit will be clear. The senior officer of the hero tells him the same thing – resolve the howdunit and you will know the answer to the whodunit. I beg to differ because if through intelligence guesswork, the murderer can be identified, it can very easily be known (through deductive reasoning) how the murder could be committed.

The biggest minus point of this movie, in my opinion, is its slow take-off. The first half an hour of the movie virtually tests the patience of the viewer. The story picks up speed with the entry of Roselyne and her murder thereafter. However, after watching the movie, I felt that the first half an hour was devoted to the build-up of the story, the development of the principal characters and their mutual relations and also the groundwork for the resolution of the mystery (as becomes clear when the identity of the murderer is revealed in the climax).

Technically the movie is ok but the editing should have been better. One or two characters could have been deleted and the climax should definitely have been shortened. Cinematographer has portrayed Simla beautifully  though I wonder how could all the filmmakers show thick ice in Simla whereas I never found such layers of ice there whenever I visited Simla. I saw ice only at Marhi and at Rohtang. Production value is not high and the negative used seems to be of poor quality because the colours look faded.

Despite its slow start, the movie can be supported as a good murder-mystery. The curiosity remains there alongside the guesswork going on in the mind of the viewer as to who can be the culprit. Occasional doses of comedy are good. The songs and dances are also entertaining though R.D. Burman has prepared no great music for the movie.

Mithun Chakrabory has done very well. He is a very big plus point of the movie and sporting a mustache, looks quite handsome. Since he was popular as a dancing star those days, he has been given ample opportunity to dance in his typical style and entertain the audience (though the real life cops cannot be imagined as dancing like that). This is his only movie with Ranjeeta in which he has not been paired opposite her. He has been paired opposite Anita Raj whose talent has been wasted in this insignificant role. Deepak Parashar and Ranjeeta alongwith all others including the actress playing the role of the murder victim – Roselyne, have performed according to the requirements of the roles assigned. 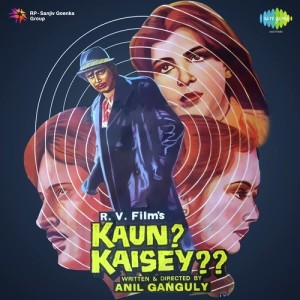 Kaun ? Kaisey ?? is a traditional murder mystery which provides timepass entertainment if the viewer is patient enough to sit through the initial reels. I recommend it to the movie buffs who are fond of murder-mysteries. Since Mithun Chakraborty commands a huge fan-following in India, it is recommended to his admirers too.