An individual dies but enlivens a nation

Amidst the darkness of the night of the 23rd day of the month of March in the year 1931, three dead bodies were burnt in a jungle near Ferozepur (Punjab). The sparks coming out of their bodies set the minds of a whole population on fire. A revolution broke out. A nation awakened.

Born in the house of Sardaar Kishan Singh from the stomach of a brave lady – Vidyavati, Bhagat Singh learnt to love his nation and hate the foreign rule since his early childhood. His uncle, Sardaar Ajeet Singh was a great patriot who spent a major part of his life either in jail or in exile. Coincidentally, Sardaar Ajeet Singh passed away on 15th August, 1947 itself and his last words were – ‘Thank God. My mission is fulfilled.’ In such a great family, this great son of India was born with abundant love for his nation in his genes. 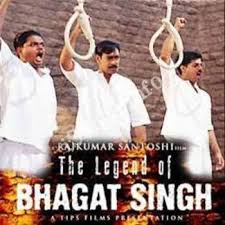 True to its title, The Legend of Bhagat Singh narrates the legend of this revolutionary from birth to death, covering the historical incidents taking place in that period (1907-1931). Rajkumar Santoshi has directed this movie after a lot of research work. Still a couple of lacunaes got overlooked. At the time of the Chauri Chaura incident (1922) in which a mob had burnt a police station killing many policemen, Bhagat Singh was 14-15 years old but in the movie, Santoshi has committed the blunder of showing him as 10 years old. Besides, the movie portrays Mahatma Gandhi in badlight (he appears to be a supporter of the British) which could have been avoided through careful drafting of the script. 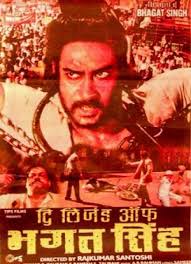 If we ignore these deficiencies, The Legend of Bhagat Singh is a highly authentic and sensitive movie which portrays the life and conveys the message of the great visionary with a high intensity of passion. The movie unlike the other Bhagat Singh based movies, gives proper footage and importance to his fellow martyrs – Sukhdev and Raajguru. In fact, this is the only movie in which these two martyrs have been described in detail and with realism. The character of the leader of the revolutionary group, Chandrashekhar Aazaad has been given ample footage and his greatness has been brought to fore with vehemence, still his character has not been allowed to overshadow that of Bhagat Singh. 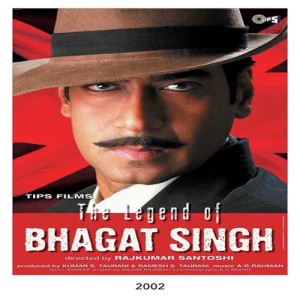 The biggest plus point of this movie is that it has put greater emphasis on the philosophy and thoughts of Bhagat Singh than his armed activities. In discussions inside the revolutionary group as well as in the high tempo drama in the courtroom, the director has focussed on the ideas of the young legend whose tender age did not match the maturity of his brains. He was able to look beyond the immediate goal of attainment of political freedom and visualize the future state of affairs in the nation. He understood the reality and knew what should be the ideal state of affairs post freedom. He knew that substition of old masters by news masters will not change the fortunes of the country. The system that ensured exploitation and oppression of the resourceless and the underdog by the resourceful and the mighty, had to be changed. Then only the freedom could be called freedom in the true sense. The movie presents these ideas from the mouth of the great martyr with such a clarify that is rarely seen in the Indian movies. A kind of subtlety prevails throughout and the loudness of the events and the period that was, has been kept under check. 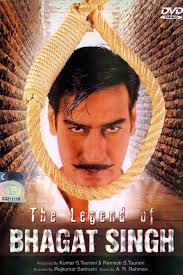 Technically, the movie is marvellous. The production value is high. The art director and the cinematographer have left no stone unturned in bringing that bygone era alive on the screen. Everything has been shown with a high degree of authenticity. The movie is not unduly long and certain events not supported by the historical records have been avoided. Despite dealing with real life episodes, the movie has not been reduced to a documentary. It is very interesting from beginning to end.

Dialogues are quite praiseworthy. The discussion between Bhagat Singh and Sukhdev regarding the arrest after throwing the harmless bomb and the pamphlets in the central assembly, is damn impressive. Offering his arrest after the planned incident was a part of Bhagat Singh’s very smart and clever move against the British rule through which he was going to implement his strategy to use the courtroom as a tool for the anti-British campaign but Chandrashekhar Aazaad was initially not in its favour. How Sukhdev reprimands Bhagat Singh for bowing before the order of Aazaad and provokes him to pressurize Aazaad to allow him to go for this work and get arrested, is simply superb.

A.R. Rehman has composed the music according to the patriotic flavour of the movie. In addition to the songs written by the martyrs themselves, i.e., Sarfaroshi Ki Tamanna, Mera Rang De Basanti Chola and Pagadi Sambhaal Jatta; Desh Mere Desh Mere Meri Jaan Hai Tu and Maahi Ve specially impress among the songs which are all admirable. Sameer has written good lyrics for the songs.

Ajay Devgan quite deservingly won the national award for the best actor for this movie. His eyes speak a lot. He not just played the role. He seems to have lived a minuscule life of the immortal hero. Ditto for Sushant Singh as Sukhdev who got perhaps the meatiest role of his acting career and shined like anything. Farida Jalaal as Bhagat Singh’s mother, Raj Babbar as his father and D. Santosh as Raajguru are fabulous. Despite his age being on the higher side, Akhilendra Mishra has left a big impression in the role of Chandrashekhar Aazaad and the scene of his death is a tear-jerker. All others including Amrita Rao in the role of Bhagat Singh’s fiancee – Maanawaali, have done their cameos with perfection. Even the smallest character has not been ignored and allowed to maintain its identity.

On the occasion of the 87th anniversary of his martyrdom, I pay my tribute to the immortal martyr whose legend will continue to be told generations after generations. The India of today is by no means the India of his dreams. Let’s salute him and do our bit to improve the condition of our society and our nation.

The link of my review of old classic movie Shaheed is :

4 Responses to An individual dies but enlivens a nation