The decade of the sixties saw many love-triangles made in Bollywood. Besides, since abortion was then illegal and therefore, an unmarried girl’s getting pregnant used to be a ticklish problem for herself and her family, many movies were made on the theme of the life of an illegitimate child. Today, I am reviewing a black and white movie made in that era which is an intense drama blending both these issues. It’s Begaana (1963).

Begaana (not own / having no relation with self) starts with the pre-marital pregnancy of its heroine – Supriya Choudhury whose beau – Sailesh Kumar seems to have vanished in the thin air. Her parents seek the help of a benevolent doctor (Tarun Bose) who is a friend of her father. The doctor clandestinely arranges Supriya’s confinement in his supervision but tells her and her parents that she has given birth to a dead child. Since himself is absolutely lonely in his life, he becomes the foster-father of the boy-child thus born. However he is a heart-patient and dies after some time handing over the child to his dentist friend – Agha and his wife – Manorama who are already having three children of their own. To have better career prospects, Agha alongwith his family containing this kid also, shifts to Mumbai (then Bombay).

On the other hand, the child’s unmarried mother – Supriya Choudhury gets married to Dharmendra against her will and her mother does not allow her to disclose this fact to her husband that she has undergone pregnancy and childbirth in the pre-marital part of her life. Dharmendra loves his wife very much but Supriya remains concerned from his side because he is strictly against pre-marital sex. Agha and his family become their neighbours after shifting to Mumbai. Very shortly, an affectionate relationship is established between Supriya and the little child – Master Babloo. Agha’s wife – Manorama ill-treats the little child (because he is not her own child and she has no affection for him) and his status is that of a servant only in Agha’s house. This fact pains Supriya very much who has not become mother in her married life. One day, she comes to know of the fact that this child is her own offspring only and then the heart of the mother wails at the plight of her kid but she is not able to reveal this truth to anyone which suffocates her like anything.

On another track, Sailesh Kumar who could not return to Supriya because of meeting with a lethal accident, starts searching for her after recovering from his injuries. He is a true lover and quite restless to locate his sweetheart but after marrying Supriya to Dharmendra, her parents have left their original place and now their whereabouts are not known to anyone. Dharmendra is the old college-mate of Sailesh Kumar. Being a publisher, when he visits Agra due to some business, he happens to come across Sailesh and seeing him in a miserable condition, brings him to his house at Mumbai. Now Sailesh and Supriya are startled to see each other in the changed scenario and they do their best to hide their earlier relationship from Dharmendra. Dharmendra gives Sailesh a responsible position in his publication house but does not allow him to live separately and makes him live in his house only. In the office of Dharmendra, a lady employee – Maadhavi starts liking Sailesh but the trouble is that Sailesh is still nurturing fatal attraction for his old flame Supriya. He also comes to know of the little kid who is so dear to Supriya but Supriya does not tell him that he only is the kid’s father and she only is the kid’s mother.

Due to Sailesh’s still pursuing Supriya despite her repulsion for him and her warning to him to stay away from her, the seed of suspicion is sown in Dharmendra’s heart regarding the relationship of his friend – Sailesh and his wife – Supriya. Besides, due to the regular protest of Agha and Manorama regarding the little kid’s visiting their home and spending hours with Supriya, Dharmendra prohibits Supriya from calling the kid to their home and also the kid to come to his place. Now it’s a painful situation for the mother who is starving to pour her love on her child as well as the child who is starving to get love and affection in his life. Sailesh keeps on making advances towards Supriya under the desperate hope of regaining her love. The tension thickens and thickens among these four principal characters of the story till one day, Dharmendra comes to know the truth pertaining to the other three. What happens then leads the story to its logical conclusion. 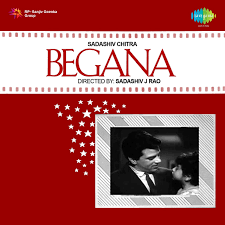 The movies like Begaana reveal the fact as to how much effort was devoted to writing of screenplay in the era when this movie was made. With limited number of characters, the script-writers have inserted enough twists in the story and kept the audience spellbound for more than two hours. The curiosity factor remains alive through the drama taking place on the screen and it’s pretty difficult to guess the end of this movie. Though the script is imperfect and certain loose ends have been left as untied in the end, it deserves applause. The character of Maadhavi (who likes Sailesh) has been left half-baked with nothing told about her in the final part of the movie. Despite such flaws, there is little doubt that the writer and the director have been successful in presenting an engaging emotional drama on the screen. Despite having the famous comedian of his time – Agha, the movie contains relatively less humour and most of time, the narrative maintains a profound tone only.

Despite made in the time of the prevalence of the traditional patriarchal social set-up as well as mindset of the people which used to impose all kinds of moral restrictions on the females only and not on the males, the movie boldly asserts through the character of its heroine that in the phenomena of pre-marital sex, the female only cannot be blamed because the male has been an equal partner in the thing happened. When the error (if at all it is to be considered an error) has been committed by both, then how far is it justified to blame and penalize the female partner only, allowing the male partner to go scot-free? Supriya boldly discusses this issue with her husband who condemns the women having pre-marital sex and pregnancy and puts the side of the women with courage and conviction. It’s something which startled me like anything when I was watching this movie. Thus this movie can be considered as ahead of its time.

Technically this black and white movie is perfect. Admirable performances have further elevated the already good story. All the principal actors – Dharmendra, Supriya Choudhury, Sailesh Kumar and Master Babloo have lighted up the screen by their natural acts. The supporting cast has also done justice to the assigned roles.

Sapan-Jagmohan have composed very good music for this movie with the touching lyrics being authored by Shailendra. The best and the most popular song of this album is Mohammad Rafi’s Phir Woh Bhooli Si Yaad Aayi Hai. The other songs – Na Jaane Kahaan Kho Gaya Woh Zamaana, Bulaati Hai Bahaar, Pyar Nibhaana Bhool Na Jaana, Saagar Ka Jhilmil Paani etc. are also quite good in terms of lyrics and composition.

Summing up, Begaana is an engrossing sentimental drama based on triangular relationship of a mother, a kid and the mother’s husband not being the kid’s father on one hand and a wife, a husband and the wife’s ex-beau on the other. There is no boredom in the movie and no viewer is likely to regret after watching it.