The honest and the modest can also dream big

On my son Saurav’s previous birthday (3rd November), I had posted the review of an old movie – Ehsaas (2001) which tells a very touching story of a father-son duo (Sunil Shetty and Mayank Tandon) with a sports backdrop (race). That movie deals with the father’s untold love for his son and a desire to see him as a winner in life which he himself could not be. It portrays all the toil and the sincere efforts of the father to provide his son with everything he needs and desires despite his own modest resources. I could relate to Ehsaas and that’s why I had reviewed it. There is one more movie which I am able to relate to in the same way. It’s Ferrari Ki Sawaari (2012) which stars Sharman Joshi as the father and Ritvik Sahore as the son. No modestly living father wants his son to get the same mediocre life and no loser father wants his son to fail in climbing the ladder of success and win in his life the way he himself did, may it be Ravi Naik (Sunil Shetty) in Ehsaas or Rustam (Sharman Joshi) in Ferrari Ki Sawaari or Jitendra Mathur in real life. Every loving and proud father feels the same way –‘I could not fulfill my dreams but I won’t allow the same to happen to my son’. 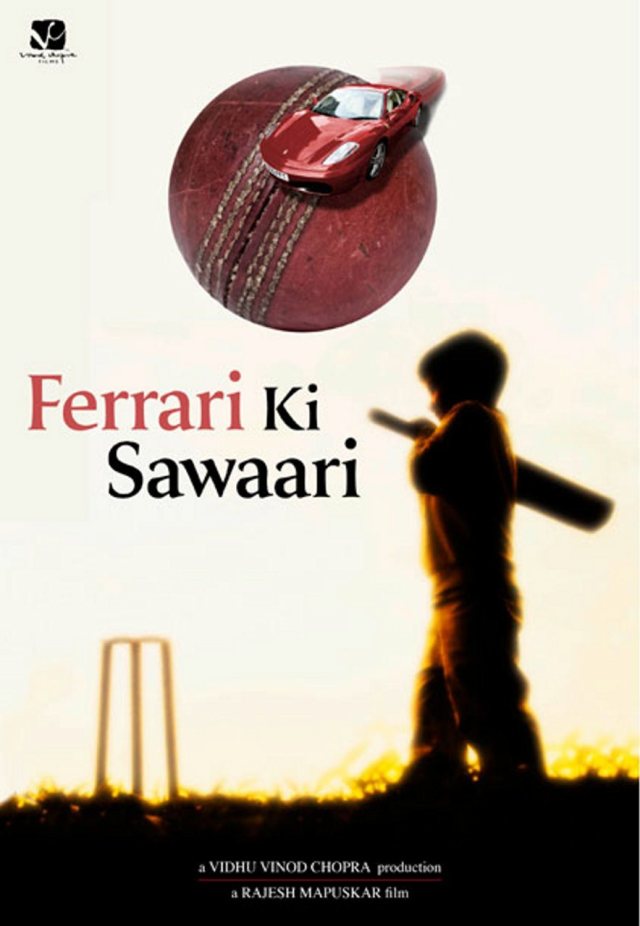 Ferrari Ki Sawaari (the Ferrari ride) is said to be similar to Iqbaal (2005) but in fact, it is closer to a few other old Bollywood movies. As I have already mentioned in the opening para of this review that it reminds of Ehsaas (2001) because of the touching father-son relationship and the father’s leaving no stone unturned for his son’s victory in life and fulfillment of his dreams. Besides, it reminisces of Raj Kapoor’s movie – Kal Aaj Aur Kal (1971) on account of showing three generations living together under a single roof, trying to adjust with one another. There is a conflict between the oldest generation (grandfather) and the youngest generation (grandson) and the twilight generation (father) tries to console both and reconcile between them. Further, its climax scene in the office of the Cricket association where the protagonist warns the negative character against playing with his son’s happiness, is quite similar to the climax scene of Khatta Meetha (1978) in which Ashok Kumar threatens Pradeep Kumar the same way Sharman Joshi threatens Paresh Rawal in this movie. Coincidentally, Khatta Meetha also tells the story of a Paarsi family just like Ferrari Ki Sawaari. Again, this movie draws parallel to a relatively recent movie – Do Dooni Chaar (2010) in which the honest protagonist (Rishi Kapoor) finally decides against deviating from his ethics to fulfill the urgent monetary need and gets a pleasant surprise in the end when an unexpected solution emerges for the problem. However, despite so many illustrations meant for a sense of deja vu, Ferrari Ki Sawaari has an originality of its own. It’s unique in its own right and deserves admiration. It’s a movie whose heart lies in the right place. There is no heroine or female lead in this movie but this fact has not made any adverse impact on the movie’s quality. 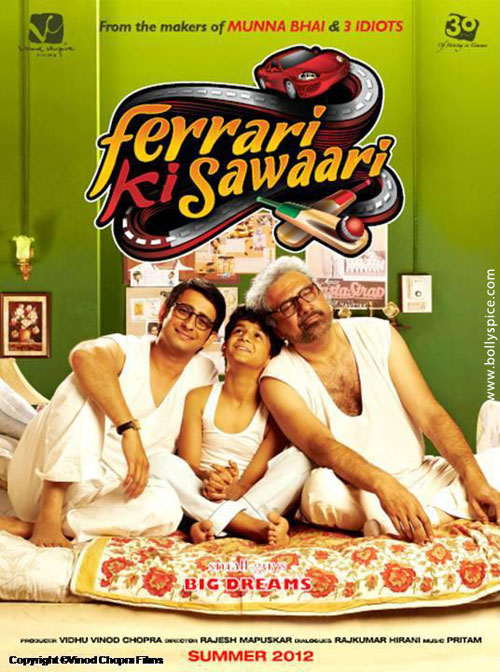 Rustam (Sharman Joshi) has seen his highly talented Cricketer father – Behramji Deboo’s frustration and he himself also is living a mediocre life as a salaried employee. Despite the opposition of his father (Boman Irani), he is hell-bent upon arranging everything required for fulfillment of his motherless talented son’s dream to become a successful Cricketer. When an opportunity arrives for his son – Kayo (Ritvik Sahore) to attend a training camp at Lord’s (England) with a cost of Rs. 1.5 Lakh rupees, he knocks every probable door for money and gets disappointment only in return. A wedding planner (Seema Paahwa) tells him that if he is able to arrange Sachin Tendulkar’s Ferrari car for a few hours to be used in the wedding of a politician’s son, he will get the required money as his remuneration for that service. The storyline picks up this clue and reaches the climax after meandering through many twists and turns, some believable, some unbelievable but all being entertaining.

‘Honesty is the best policy’ is something the innocent children are taught (by the adults of whom many are dishonest themselves). Is it really so ? No ! The poor child comes to know of this reality after losing a lot in his life including his invaluable innocence. The watchword in all the competitive fields is -‘success at any cost’. And hence the straight one remains the perennial loser everywhere. Straight trees are cut first. So why to remain straight and learn this lesson the hard way and quite late ? That’s the story of the character of Boman Irani in this movie who loses out to his backstabbing friend (Paresh Rawal) and decades later too, the unscrupulous friend who has gone past him by miles in the practical life, is the same, not changed by even an ounce. Should we rely upon it ? Yes, for people change but only when they are losers in life (and they too change in the negative direction only). The successful ones never change. Success is a highly precious thing which has to be preserved by all means and can’t be risked for the sake of friendship or relationships or even atonement for the past sins (like Paresh in the movie). That’s what all the bestselling self-help books teach the readers – be selfish and in turn, be successful. However the protagonist of Ferrari Ki Sawaari (Sharman Joshi) who is a Paarsi, is not ready to learn this lesson despite seeing his father’s debacle in life. He still believes in truth, honesty and righteousness. And such believers only ensure the survival of the world which can’t survive a single day if everybody becomes untruthful and dishonest. He presents himself before his son as a role-model of truthfulness. Highly exemplary for the nurturers of the gen next !

Ferrari Ki Sawaari impresses very much in the first half. I can imagine several spectators flowing freely with the incidents taking place on the screen with the protagonist just like me. Despite almost everything being perfectly predictable, it influences and moves the viewer through several touching scenes which are like gusts of fresh air. The second half is mostly over the top and tones down the profound mood of the movie. And that’s why it is not that impressive (though entertaining and amusing for its major part). Frankly speaking, the second half drags just too much and while watching it, I felt that the track of the politician’s son was completely superfluous in the post-interval session. The movie could have been shortened by a few reels. The length has only diluted its positive impact on the audience. Vidya Baalan’s item song is also quite unnecessary. It’s a pity that box office oriented thinking turns outstanding movies into good ones. 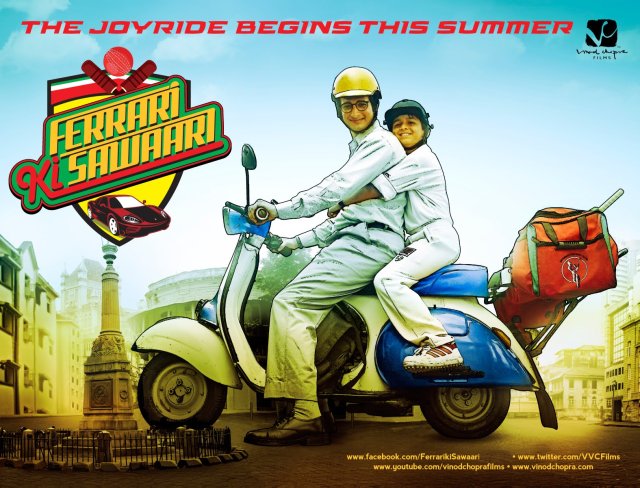 Technically, the movie is good. The modest layout of the residence of the principal characters and the realistic set-up of the locality, both make the movie as relateable to the Indian lower middle class people. Music by Preetam is also quite good. The best song, in my opinion, is Aye Mere Mann (sung by Shyamantan Das). 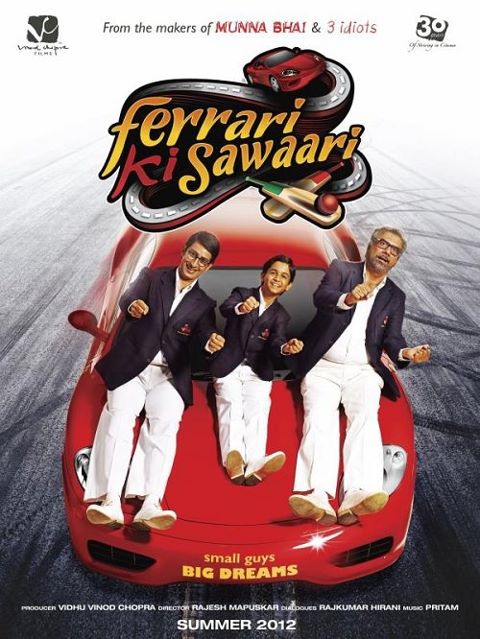 All the three main characters of this movie – Sharman Joshi, Boman Irani and Ritvik Sahore have delivered towering performances. Sharman Joshi is such a natural actor that he can fit the bill for any character and I am tempted to categorize him with Late Sanjeev Kumar. Boman and Ritvik do not lag behind him in entering the skins of their respective characters. The supporting cast has also done exceedingly well. Seema Paahwa as the kind-hearted wedding planner, takes the cake. Paresh Rawal has been wasted in the negative role of the selfish old friend of Boman Irani.

Dreaming does not come under anybody’s monopoly or patent or copyright. It’s not the fiefdom of the rich, the resourceful and the mighty. Corruption and dishonesty have got a strong justification in India that they are unavoidable to earn enough money to give a better life to the next generation. But Ferrari Ki Sawaari tells that there is no need to be dishonest to dream big for your offspring (if you are already not rich and resourceful). The honest and the modest are also entitled to dream big for themselves as well as their children.