This night will not come again

Yeh Raat Phir Na Aayegi (1966) is a suspense thriller from the black and white era starring chocolaty hero of the sixties – Biswajeet cast opposite Sharmila Tagore, the beauty with the dimples. Biswajeet had earlier done suspense movies like Bees Saal Baad (1962) and Kohra (1964) in association with Waheeda Rehman. This time he got paired with Sharmila Tagore who was also in her initial years in Bollywood. This is not a great movie but a good mystery all the same with simply superb music of late O.P. Nayyar.

Yeh Raat Phir Na Aayegi (this night will not come again) starts with an archaelogist – Prithviraj Kapoor who is busy in an archaeological excavation with his assistent, Rakesh (Shailesh Kumar) in search of some old civilization. He has engaged his daughter Reeta (Mumtaz) to the son of his deceased friend who is our hero, Suraj (Biswajeet) who is a painter and going to inherit the wealth of his late father after marrying Reeta only. During the proceedings of the excavation work, a very old statue of a well-ornate female dancer is found and also found a seemingly equally old skeleton of some female with similar bangles in her wrists as in the wrists of the statue. The archaeologist who is addressed as the Professor in the movie, reads a book about that 2000 years old civilization in which there is a mention of a dancer known as Kiranmayi whose statue (and perhaps the skeleton with the bangles also) has been found by him. 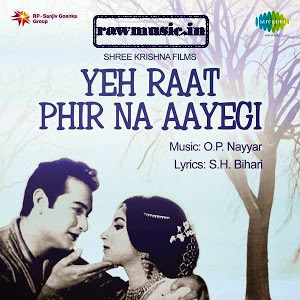 The twist in the tale comes when Suraj happens to come across a mysterious damsel calling herself as Kiran. When Suraj invites this mysterious beauty (Sharmila Tagore) to a party thrown by him, she startles everybody including the Professor because she is in the get-up of that dancer (whose statue has been found) only and moreover, wearing the same bangles in her wrists as found on the wrists of the skeleton and which the Professor had kept for safekeeping. When the Professor checks their status, he finds them as missing from his safe custody. The real trouble starts when Suraj finds himself in love with this so-called Kiran who is getting more and more mysterious to him (and for the others as well). The suspense deepens when a seemingly jealous Reeta murders Kiran but she is found alive again. She tells Suraj as such and all others also believe that she is not a flesh and blood human-being. Instead she is the spirit of that deceased dancer – Kiranmayi who used to exist 2 millenniums back. Suraj’s life is in danger because that so-called spirit wants to unite with him (calling him as her lover in that millenniums-old incarnation) forever transcending the bounds of life and death. The mystery is resolved in the climax.

The title of the movie is as such because the so-called spirit of Kiranmayi wants to unite with Suraj forever on the full-moon night by making him get rid of his earthly existence, telling him – ‘Do it tonight as this night won’t come again (Yeh Raat Phir Na Aayegi)’.

Yeh Raat Phir Na Aayegi has a very good script but after watching it, I felt that the narrative is not that much impressive as it could have been, considering the quality of the story. The songs block the flow of the story every now and then. The resolution of the mystery (and the unmasking of the culprits) in the climax is not very convincing (at least I was not satisfied). Better direction could have turned this movie into a spellbinding suspense movie. All the same, it’s a nice watch. Certain sequences are damn impressive. And good songs with good performances of the male leads (and of course, the curiosity regarding the resolution of the mystery) don’t allow the viewer to leave it before the ending scene. 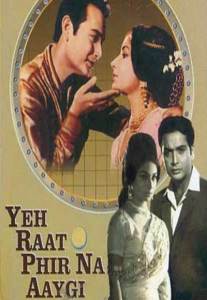 Technically this black and white movie is good. The art director has successfully exasperated the environment of excavated sites and nearby places, the caves, the lake etc. according to the requirement of the script. The cinematographer has also done his job well in association with the art director, creating a mysterious atmosphere for the audience. The length of the movie is according to the norms prevailing for Bollywood movies in that period.

Performance wise talking, Prithviraj Kapoor, the great actor of Hindi cinema, takes the cake. He has delivered a highly impressive performance in the role of an archaelogist as well as the father of a grown-up daughter. Dashing and charming Biswajeet has done well, especially in the romantic scenes and songs. Mumtaz and others have also done perfectly. Though the story revolves around Sharmila Tagore, I found herself only as miscast in this movie. Perhaps an actress like Waheeda Rehman would have been a better choice for the role of the mysterious leading lady.

Yeh Raat Phir Na Aayegi has a repeat value for the music lovers because both the songs and their picturization are just very good. I recommend this interesting black and white suspense movie to both the music-lovers and the mystery-lovers alike.

2 Responses to This night will not come again