Love (that is, male-female love) is one of the most interesting topics of all the discussions especially when the discussing people are young. Love is also one of the most popular themes for works of fiction, may it be stories or novels or plays or movies. Indian society has seldom been liberal enough to accept love and choosing of own life partner on the part of the young generation. Still love stories have been the most popular ones in Indian movies. Perhaps half of the movies made in different languages of India are having male-female love only as the theme. Why when the Indian society has always considered love as something not desirable and the youths have always been expected to follow the dictates of their elders in matrimonial matters ? Because what’s tabooed only attracts the most. It contains a fascination, the fascination of a forbidden fruit. And when adolescence dawns on human-beings, barring exceptions, who does not feel an attraction towards the opposite sex ? Social restrictions can check and affect concrete actions but not the feelings in hearts.

But then what’s love ? Attraction motivated by (indirect and hidden) carnal needs ? Liking for someone ? Infatuation for someone ? Or something else ? How do we come to know that we are in love with someone special ? How does it dawn on a female that she is in love with a particular male or on a male that he is in love with a particular female ? Well, it dawns through a feeling. A feeling in one’s heart which finally envelops his / her whole personality and pervades all his / her thoughts. Yes, love is a feeling and that’s why it can’t be described or elaborated, it can only be sensed. 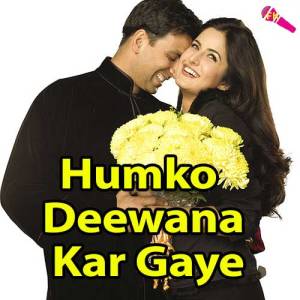 Bollywood film director Raj Kanwar has directed some good movies. He has a mixed track record consisting of some hits and some flops. Humko Deewaana Kar Gaye (2006) is a flop movie directed by him. However when I saw this movie, I found it to be a fairly good movie – a love story which underscores a very significant fact that I have asserted supra – ‘Love is a feeling‘. You know it when you feel it. This feeling only is the biggest and in fact, the only evidence of existence of love for someone in your heart. 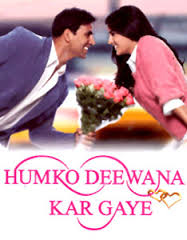 Humko Deewaana Kar Gaye (left me crazy) is the love story of Aditya (Akshay Kumar) and Jia (Katrina Kaif) who run into each other in Canada. On one hand, Aditya is already engaged to Sonia (Bipasha Basu), on the other, Jia is the betrothed of Karan (Anil Kapoor). Love blossoms in their hearts with a feeling that they are comfortable in each other’s company, they love to be in each other’s company and they want each other’s company for their lifetime. Through his association with Jia, Aditya comes to understand that he is not meant for Sonia and Jia only can fill the vacuum in his life. On the other side, Jia understands through Aditya that love is nothing but a feeling and that feeling she has developed for Aditya and not Karan.

The twist in the tale arrives through a mistake by Aditya’s drunkard friend Nawaab (Vivek Shauq) making some tragic facts of Jia’s personal life public which, in turn, leaves her heartbroken and misunderstanding Aditya for that. Jia gets married to Karan and then only she comes to know that Aditya is innocent regarding this bad taste giving incident happened with her. But it’s too late now. However the story gets a final twist in the climax to have a happy ending for the lovers (and the other ones associated with them too).

Except for the melodramatic and unimpressive climax of the story, Humko Deewaana Kar Gaye is overall a good movie which touches the audience, especially the romantic hearts, at many places. The romance of the lead pair in Canada is lovely with the beautiful surroundings adding immensely to it. The sequence of the lead pair moving together in a cold, snowy night is not only very romantic but also very emotional. Life, in the real sense, is only a collection of moments. And there are certain moments that we cherish forever. The romantic moments spent in the association of the sweetheart are such moments only. During them only the feeling of love is felt with utmost intensity.

The scene in which Aditya refers to the wife (Upasana Singh) of his friend Gurpreet (Gurpreet Ghuggi) in a derogatory way and thus generating a wrong notion in his friend’s heart for his wife’s past leading to a rift between the husband and the wife plus the following scene in which Aditya only takes corrective action for the unintentional wrong done by him and reunites the couple, are highly touching and underscore the significance of mutual trust in marital life.

The movie contains ample comic and relief moments too. The comedy done by Late Vivek Shauq, Gurpreet Ghuggi and child artist Master Abhay Kanwar alongwith Akshay Kumar and Katrina Kaif generates abundant laughs for the audience. There is a lot of fun and entertainment in the movie before the principal twist in the story thereafter it becomes heavy with sentiments.

Technically the movie is admirable. Canada appears to be very beautiful on the screen. There is only one action scene in the movie (in the climax) and that’s been executed very well. Editing is good but should have been tighter to reduce the length of the movie. Background score is good. Dialogs contain the essence of the movie.

Anu Malik’s music is overall good according to the romantic and emotional mood of the movie. However it does not boast of any chartbusters. Mainly Bhula Denge Tumko Sanam Dheere Dheere and the title track remain with the audience after the movie is over.

Akshay Kumar has refined and improved himself as an actor movie after movie over the past one and a half decade. He has delivered a very romantic, very touching and a very controlled performance. Katrina Kaif has tried to do her best and her beautiful looks seem to compensate for her acting deficiency. Their on-screen chemistry is simply enchanting. Anil Kapoor and Bipasha Basu have done well but both seem to be miscast in their respective roles. Bhagyashree as Akshay’s sister alongwith Shernaaz Patel, Mahesh Thakur, Vivek Shauq, Gurpreet Ghuggi, Upasana Singh, Master Abhay Kanwar plus other supporting cast members (which are many because the narrative contains an engagement ceremony and a wedding ceremony involving the families of those getting engaged / married) have done quite satisfactorily.

Humko Deewaana Kar Gaye is by no means any extra-ordinary movie. It’s a routine love story whose direction is also more or less routine only. However, by default perhaps, it strikes the romantic hearts in a hidden way and finds a quality within itself. I liked it very much and that’s why I am recommending it mainly to those who are romantic and emotional like me.

Whenever I recall this movie, the dialog of Akshay strikes my heart like anything – ‘Pyar Kya Hai ? Ek Ehsaas, Haan Keval Ek Ehsaas Hi To Hai’ (What’s love ? A feeling, yes, just a feeling only).

Just like Aditya of this movie, I also know it.