A saga revealing the complexities of human psyche

Posted on January 3, 2017 by Jitendra Mathur

Seven years ago (in 2010) when Shahrukh Khan’s acting in My Name is Khan was talk of the tinsel town and a hot topic for the moviegoers and the movie-reviewers alike, I happened to refresh the nostalgic memories of Nana Patekar’s performance in an almost forgotten movie – Yugpurush that had got released in 1998. The difference in the characters played by SRK and Nana Patekar is that while SRK is a patient of Asperger’s Syndrome since birth in MNIK, Nana Patekar portrays an asylum-released mental patient (catatonic) in Yugpurush. The similarity is that both the characters are childlike innocent in their attitude and behaviour and that’s why simply lovable. Doing no injustice to SRK for his commendable job in MNIK, I rate Nana’s performance as Aniruddh in Yugpurush is a lesson in acting and that’s how we differentiate between a star and a class actor.

Yugpurush was directed by Partho Ghosh who is definitely not a legend but he had carved a niche for himself in the nineties through movies like 100 Days (1991) and Agni Sakshi (1996). Yugpurush flopped on the box office and got brushed aside by the elite reviewers too under the accusation that it gave preference to the love-triangle aspect of the story over the childlike innocent character of Nana Patekar alongwith his experience in the real world outside the asylum, his impact upon others (and others’ impact upon him) and his overall presence in the plot (which could have established him as ‘Yugpurush‘ and justified the title of the story). 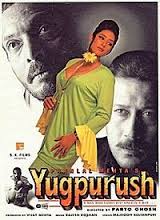 In Yugpurush, Aniruddh (Nana Patekar) gets released from asylum at the age of 36 years after spending a quarter of a century behind its closed doors. Doctors declare him completely cured and a normal human-being fit to live in the society. He carries the normalcy certificate issued to him everywhere with him to show it to the people as an evidence that he is no longer a mental case. He comes in contact with police in the course of saving the life of a child in a riot, Sunita (Manisha Koirala) who is the keep of a corrupt politician, Paresh (Shivaji Satam); Ranjan (Jackie Shroff), a spoiled millionaire youth and the family of his mentor – Mohan (Mohan Joshi) who is having an eye on Aniruddh’s ancestral property etc. He starts loving Sunita and a lovelorn Sunita finding herself among greedy and narrow-minded people, too falls prey to the childlike innocence of Aniruddh. Mohan’s kind-hearted daughter – Deepti (Ashwini Bhave) also is in love with Aniruddh. However things take turn with the fact that Ranjan too tries to get Sunita with the help of his filthy richness. Though he had befriended Aniruddh, the beauty of Sunita overpowers whatsoever friendly feelings he might be having in his heart towards Aniruddh. The fact Ranjan could not understand is that money can buy only a woman’s body, not her heart and sentiments. Sunita runs away from Ranjan (despite having committed to live with him in lieu of money) and goes to Aniruddh whose love for her cannot be measured on any scale. The jealousy and the sense of defeat in Ranjan leads to the climax of the story in which the asylum’s doctor who had treated Aniruddh is compelled to tell the relevant people that his toil of 25 years has been undone within a few months. Ranjan realizes that Aniruddh was a Yugpurush (man coming just once in an era) but only when it’s too late.

Yugpurush is by all means Nana’s movie only. He has given several marvellous performances in several movies playing different kinds of roles. But his portrayal of Aniruddh in Yugpurush is, in my opinion, is his hitherto best ever performance for which he quite unjustifiably did not get any award. Jackie Shroff as Ranjan, Mohan Joshi as Mohan, Shivaji Satam as Paresh etc. among others have done full justice to their characters. But special mention is needed for the female leads. Ashwini Bhave as Deepti has simply startled with her natural performance. Her expressions and emotions expressed in the climax are simply superb. But it is Manisha Koirala who steals the show as Sunita with her sparkling beauty having shadows of her internal gloom and portrayal of her conflict between practical life with Ranjan and emotions for Aniruddh. As a woman torn between love and money, Manisha simply rocks. This extra-ordinarily beautiful and talented actress ruined herself through alcohol and affairs in later years which is really sad.

Partho Ghosh has given a sensitive treatment to the story and done justice to it in major parts if not fully. It is a movie which explores the inner side of human-beings and tries to reveal its grey and dark shades alongwith the intricacies and contradictions inherent. The story loses its way in post-interval part when the triangular relationship of Aniruddh, Sunita and Ranjan becomes just too much and comes heavily upon the viewers making them desperate for some relief that they do not get till the end of the movie. But overall the impact of the movie remains with the viewer for a long time after it is over. The scene of Aniruddh signing the property papers in favour of Mohan without any thought and thereby making Mohan move to the extent of tearing them himself as well as the scene of Aniruddh’s saying to Sunita – ‘Paise nahi hain mere paas; main pyar de sakta hun, samman de sakta hun‘ (I don’t have money, I can give you only love and respect) leaves a deep-seated impact upon the viewer. The movie strongly underscores the point that a person can be good till he is a child (by age or by heart) and the bad elements creep in the personality with the contact of so-called practical life and people. The tragic end of the movie generates a throbbing pain in the heart of the viewer, making him empathize with Aniruddh.

The music is not great but not bad either. Cinematography and art direction are good. Dialogues are nothing short of excellent. Editing could have been better. Screenplay could have been more innovative and gripping. Director Partho Ghosh could have tried to be a bit more creative while dealing with this unorthodox script, so as to make the movie more gripping and entertaining.

All fans of Nana Patekar should watch this movie and the people who have liked My Name is Khan (with Shahrukh’s acting as Rizwan Khan) too. It is a well-intentioned movie containing many plus-points for sensitive audience. If you want to see the complexities of human psyche, do watch Yugpurush.

A Chartered Accountant with literary passion and a fondness for fine arts
View all posts by Jitendra Mathur →
This entry was posted in Movie Review and tagged Movie Review - Yugpurush. Bookmark the permalink.

4 Responses to A saga revealing the complexities of human psyche