Singing experiences of a non-singer

I have been a music lover since my childhood. Since my mother had learnt music properly in her bachelorhood and a harmonium had come to our home alongwith her as a part of her dowry, she wanted me also to learn music. Herself being busy with the household, she could not teach me but at her insistence, I started visiting a music teacher – Shri B.L. Surolia to learn playing harmonium who taught me sargams, thaats and classical raagas. A book called Sangeet Kishore was also bought for that purpose. However to learn music, one has to catch the essence of rhythm (Laya) and beats (Taal) which I couldn’t. It was not possible also for me to practice hard (Riyaaz) at my home because of non-conducive environment there and my keeping the studies above everything else during my studenthood. Naturally, I could not learn music but the love for music continued to exist in my heart.

Those days, a cultural programme of the Kaayastha community (which I belong to) of the town (Sambhar Lake, my hometown) used to take place annually in which the young boys and girls of our community participated wholeheartedly and a thoroughly colourful programme containing songs, dances, mono-acting and dramas was presented to the members of the Kaayastha community of the town in a Winter evening. Music experts used to get them prepared for the programme through a fortnight long practice. I also participated in such a session in order to become a part of the group song for the programme going to take place some time in January 1980. The music expert getting the songs prepared was respectfully and fondly called Nawal Ji. I also gave an audition to him by trying to sing alongwith his harmonium playing. My voice proved to be so hoarse and unmelodious at that time that Nawal Ji immediately ousted me from the group song. I wept a lot there itself and later on at my home also and my elders kept on admonishing me by asserting that Nawal Ji was very strict with everybody and so I should not feel demoralized and the like wise things to console me.

However the love for music and songs continued to be nurtured in my heart. My mother used to sing and play harmonium at times and I also dreamed to do the same in later years. When I entered advanced classes, I won prizes in debate contests and mono-acting events (during inter school and inter college cultural events) but the dream to sing (or play some instrument) remained unfulfilled. When alone, I used to sing filmy songs trying to sing exactly the way they were sung by the playback singers. I always felt that I sang well but whenever tried to demonstrate my singing skill in the accompaniment of a musical instrument or in front of others, I failed miserably.

In the further late years, troubles at my home forced me to go to outside places for studying and preparing for examinations. Fortunately I got peaceful and lonely places where I could study without any disturbance. Considering it a boon, I tried to sing loudly during my study breaks (of ten or fifteen minutes after every two or three hours). Many times, I felt that my throat was not that bad as appeared while singing in front of an audience. Hence within myself, I was assured that music was definitely my cup of tea.

After graduation, I moved to Kolkata (then Calcutta) in August 1988 to do my C.A. course. There also I got a completely independent room to live and study. Again whenever I was not studying or reading newspaper etc., I used to sing songs while keeping the door of my room closed (so that the people in the neighbouring rooms are not able to hear). Since my ears told me that I sang well, I was further convinced that I could sing. During our audit tours, I made my fellow team members my audience and sang many songs to them (the lyrics of several good songs were stored pretty well in my memory). Sometimes, I got positive feedback too.

After completing C.A., I joined an organization as an employee and there also, I got opportunities to sing. Since I was not compatible with musical instruments, I used to sing without instruments only. The girl I wanted to marry was a good singer and hence when visiting her, I always urged her to sing something. Once I also sang a song to her which was, if not appreciated, not criticized either by her. Our marriage could not take place and naturally, those things got reduced to memories only. Years passed. I changed jobs and places, got married, tried for the Indian Civil Services in 1997-98 and met a lethal accident in 1999. After undergoing many complicated surgeries of my badly fractured left hand, I started preparing for my final attempt for the ICS (with whatever time left with me before the main examination) while living at Udaipur alone because my wife being a government servant, could not live with me. Since I studied from morning to night in three-four stretches, I got time to listen to music and to do something myself too during the breaks. I used to try to sing and also to play harmonium (which was with me only those days). It was a rental accommodation at a somewhat lonely location and I could sing and play without anybody listening to it.

Destiny landed me up in Nuclear Power Corporation of India Limited when the new millennium was approaching fast (December 1999). After spending 13 months at Tarapur Atomic Power Station (Boisar, Maharashtra), I got transferred to Rajasthan Atomic Power Station situated at Rawatbhata near the city of Kota (Rajasthan) in January 2001. When I reached there, already preparations of the annual cultural meet of the organization were going on. Normally the unit level trials were completed in December but that year, they were late by a few days and hence being conducted in January. I got myself registered for the solo vocal event and sang a patriotic song whose tune was based on a famous Bollywood Qawwaali – Ye Maana Meri Jaan, Mohabbat Saza Hai, Maza Ismein Itna Magar Kisliye Hai (the words of lyric set for this tune were – Ye Maana Tiranga Balidaan Ka Hai, Bana Teen Rangon Se Magar Kisliye Hai). Two music experts present there (who were also employees of the organization) – Bhanwar Laal Jaarola (on harmonium) and Devan Sharma (on tabor) ensured that the song was presented well. I did not win any prize (nor was I expecting) but got positive feedback for that. Later on, a young girl known as Shreya Ghoshal who was brought up in that small town only, became a renowned playback singer and her success created a stir in the hearts of the young singing talents of the town with music floating on the air in every nook and corner of that.

After a few months of that first singing experience of mine at Rawatbhata, I happened to know that a very aged music maestro known as Pandit Naaradanand Shaastri used to teach music in a temple situated in a colony of milkmen (known as Gurjar Basti) near to my residence in the township. I joined his class only to be ousted by him after one month because he felt that I did not practice at home after learning from him. But I rejoined his class after a few months to start a long-lasting emotional association with him. The annual cultural meet of NPCIL used to be arranged in such a way that one year was devoted to drama and poetry whereas the next year was devoted to song and dance. Hence during my tenure in that organization running up to 2007, I got three more opportunities to participate in the solo vocal event – December 2002, December 2004 and December 2006. For the event of 2002 and 2006, Naaradanand Ji got me prepared. In the 2002 event, I sang the famous romantic Ghazal of Jagjit Singh – Koi Chaudvin Raat Ka Chaand Bankar Tumhare Tasavvur Mein Aaya To Hoga. I sang very badly and got criticized not only by others but also by my wife and little daughter who were part of the audience. However after a few days, one party was organized for the employees of the Finance Department in the local guest house (in the evening of 27.12.2002) where I sang for my colleagues – Jo Bhi Kasmein Khaai Theen Humne, Vaada Kiya Tha Jo Tumse, Kya Tumhen Yaad Hai (a song from Raaz – 2002) and got appreciation. 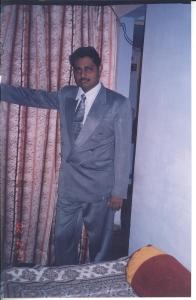 In 2004 when Naaradanand Ji were not there (he left Rawatbhata in August 2004 and spent around two years at his village – Peepli in the district Rajsamand of Rajasthan), I myself prepared a sad song which is said to be authored by Ataullah Khan but has been sung by Sonu Nigam for the movie – Bewafa Sanam (1995) – Qaraar Pa Na Sake Hum Do Ghadi Ke Liye, Tamaam Umr Tarasate Rahe Khushi Ke Liye. And quite surprisingly, I sang well in accompaniment of harmonium and tabor and got appreciation (albeit no prize). I ensured the return of Naaradanand Ji to Rawatbhata in May 2006 and he got me vigorously prepared for the next event taking place in December 2006. I prepared Mukesh’s classic romantic song – Suhaani Chaandni Raaten Hamen Sone Nahin Deteen for that occasion under the guidance of Naaradanand Ji who was invited as a special guest in the event. After I finished singing amidst a great applause coming from the audience, he said to me, ‘You sang very well’. And that was equivalent to the highest award for me.

I have sung on certain other occasions too (at Rawatbhata as well as at Kota) in between as well as after these happenings. I gave audition for Zee TV’s SA RE GA MA also during April 2004 at Kota (not selected). However the most memorable singing experience of this non-singer (not bathroom-singer) known as Jitendra Mathur came when he sang for his sweetheart with complete privacy around the twosome. I still remember singing Dil Ka Aalam Main Kya Bataoon Tujhe, Ek Chehre Ne Bahut Pyaar Se Dekha Mujhe to her and herself blushing by listening to the song from my mouth (by relating to the lyrics).

Singing and playing harmonium (which does not function very well now) is almost rare for me now due to the family set up and job. However whenever black clouds overcast the sky, the peacock of my heart starts dancing and the old harmonium of my mother pulls me towards it. I have forgotten most of the compositions learnt by me but the copy of the notations is still with me and I try to play the harmonium with their help, cherishing the fragrant memories of the bygone musical era of my life.

4 Responses to Singing experiences of a non-singer