Love at its emotional best

When we see love in the movies (especially Bollywood movies), several times we feel by watching the on-screen love that this is not real and just filmy. However Bollywood boasts of hundreds of good love stories also in which the love shown on the screen looks real and reliable. While watching them, we feel as if the lovers are before our eyes only and unknowingly we start sympathizing with them. We are joyous by seeing their love-filled delights and we feel deeply moved by seeing their sorrows and separation. Such an outstanding love story is Arzoo (1965) made by Ramanand Sagar and starring Rajendra Kumar, Sadhana and Feroz Khan. This is the love story of a lifetime which can be watched any number of times and every time it gives a fresh, soothing feeling. The songs of this movie are just great and they tremendously increase the emotional aura of the film. 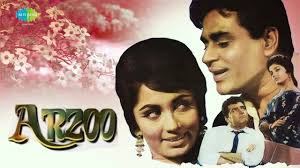 The story, in the real sense, starts in Kashmir with the encounter of Dr. Gopal (Rajendra Kumar) and Usha (Sadhana). Initial teasings lead to blossoming of a genuine, deep, adorable love between them. However, Dr. Gopal had kept his genuine identity hidden from Usha and before he could reveal it on her upon returning to Delhi, he meets a mishap and loses his leg. Then starts the painful story of separation of the two sincere lovers who struggle with the pain and sense of loss within them individually, all alone. None of the two is aware of the painful status of the other. How the story reaches its emotional climax, is an unforgettable experience to watch. 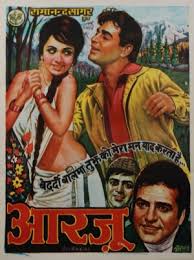 The story takes off soon and the romance between the romantic Rajendra Kumar and the eternal beauty, Saadhana is both emotional and sensational at the same time. The scenes seem to drown the audience in the ocean of love. Feeling completely drenched and sodden, the viewer is never willing to come out of that. His Aarzoo (desire) becomes to just remain lost in the on-screen romance only. The pair looks simply great and the on-screen chemistry between the two is mesmerizing. Their gestures and activities make their love look both lovable as well as reliable.

After the tragic twist in the tale, the emotional part related to the separation of the lovers has been handled by the director even more admirably. The tears of Saadhana look real as her face presents a true picture of her inner pain. On the other hand, the pain, the loneliness and the stuffiness within Rajendra Kumar come in a lively form before the viewers through his superb underplay. The way the story moves from Kashmir to Delhi and ultimately reaches the memorable climax, is something for watching, not description. The role of Rajendra Kumar’s sister, Nazima is also very impressive and it has been made quite meaningful (contrary to the sisterly roles in those times which used to be more or less sideline, routine roles).

The director, the script-writer and the cinematographer have done a remarkable job by keeping Kashmir as the backdrop of the story and it is nothing short of a treat to see the scenic beauty of Kashmir. The smooth flow of the story alongwith both the heart-tickling encounters of the duo and the hilarious comedy of Mehmood, makes the viewer forget the fact that the romance is prolonged. The story picks up speed thereafter and twists keep on coming in the emotion-filled narrative. The production value and the entertainment value, both are quite high in this movie. 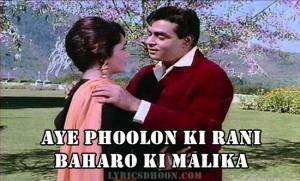 The performances are par excellence. Among the supporting cast, Nazir Hussain has delivered a very good sentimental performance as Saadhana’s father. Nazima has always been a low profile actress in the Hindi movies of the sixties, always given sideline roles only. However in this movie, her sisterly act coupled with the friendly act (she is a saheli of Saadhana) makes a great impact and she proves that she is a good actress. Stylish hero Feroz Khan has also delivered a praiseworthy performance in the role of Rajender Kumar’s friend. Mehmood’s comedy is a class of its own. Rajendra Kumar has been a great romantic hero of the sixties and in this emotion-packed role, he has performed brilliantly. The twist in the tale belongs to him. However the movie, as a whole, belongs to Saadhana, the stylish diva of the Indian screen whose hair-style, choodidaar pyjaamas (wrinkled trousers) and mojadis (footwear) had become fashion trends in India. Saadhana had always been a good actress and Aarzoo is one of her memorable movies. In the role of firstly the lovelorn and then the pain-stricken Usha, Saadhana simply outsmarts all other actors in the movie. Her display of emotions in the song – Bedardi Baalma, is able to move even the stones.

The music is the biggest asset of the movie. The lyrics of Hasrat Jaipuri and the music compositions of Shanker-Jaikishan have created an everlasting musical aura in the voices of Lata and Rafi. The songs – Aye Nargis-e-Mastana, Aye Phoolon Ki Raani, Chhalke Teri Aankhon Se, Aji Rooth Kar Ab, Bedardi Baalma etc. are all timeless classic songs. However I also like the Quawwali in the voices of Mubarak Begum and Asha Bhonsle – Jab Ishq Kahin Ho Jaata Hai very much.

Aarzoo is one of the finest contemporary love stories ever told in Hindi cinema. It is a very big treat for the people fond of love stories full of romance and emotion. It has only plus points. I recommend it wholeheartedly to all the movie buffs. 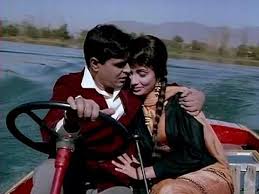 A Chartered Accountant with literary passion and a fondness for fine arts
View all posts by Jitendra Mathur →
This entry was posted in Movie Review and tagged Movie Review - Arzoo (1965). Bookmark the permalink.

4 Responses to Love at its emotional best