The greatest Indian movie made on the Salim-Anarkali saga is unarguably Mughal-e-Azam (1960). It can be considered as one of the best movies ever made not just in India but all over the world. Legendary director Kareem Aasif took 15 long years in bringing the journey of this epic movie from conception to its release and its making saw many ups and down during this time period. When Mughal-e-Azam was being made, producer Sasadhar Mukherjee used the same theme and came up with a Hindi movie. This movie based on the love story of Mughal prince Salim and an ordinary girl known as Anarkali is Anarkali (1953) which came before the audience seven years prior to the release of Mughal-e-Azam.

The story is well-known. Prince Salim falls in love with an ordinary girl named as Naadira who is rechristened as Anarkali. Mughal emperor Akbar isn’t ready to allow his the only son to marry an ordinary girl. The clash of the father and the son on this issue, finally reaches a tragic culmination and the prince loses the love of his life forever. 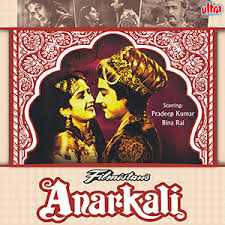 However the significant thing about this love-legend is that it’s not supported by the history despite the Mughal prince Salim who later got known as Emperor Jahangir being a real personality because there is no mention of the character of Anarkali anywhere in the history. That’s why this tragic love legend is considered an imaginary story because the character of the female itself is imaginary. Quite naturally, the other events shown in the movies made on this story are also not considered as historical truths.

And this is the reason why there is a difference in the scripts of the movies made on this movie because not being based on historical truths, this theme is open to molding and twisting for the pens of different script-writers. The events shown in Anarkali are different from those shown in Mughal-e-Azam and though the climax is equally tragic in both the movies and takes shape in a similar way, it has been given another, final and more interesting twist in Mughal-e-Azam whereas in Anarkali, the obvious only is shown and conveyed to the audience.

Considering the quality of the story, this period movie should have been made on a large scale with high production value. However it is not as grandiose and magnificent when watched on the screen as we expect it to be so, especially when it is contrasted with Mughal-e-Azam which came seven years later to it. Technically, it is okay though. The story flows very well with the help of many melodious songs and impressive dialogs. The complete team including the director (Nandlaal Jaswantlaal) has worked hard and made a decent movie.

Pradeep Kumar and Beena Roy were perhaps an ideal on-screen couple. They have come together in certain movies and have always complimented each other very well on the screen. The biggest example of their amazing on-screen chemistry is Taj Mahal (1963), another period movie which came ten years later to Anarkali. However they look quite good in this movie too and perfectly fit the bill for their respective roles. Very pretty Beena Roy has done well in the title role whereas Pradeep Kumar was always an ideal choice for costume dramas. Other actors including Mubarak as Akbar are also well in place.

The greatest asset of this movie is undoubtedly the timeless music composed by C. Ramachandra with the lyrics penned by Shailendra and Rajinder Krishan. Lata Mangeshkar has given voice to most of the female songs including the immortal Ye Zindagi Usi Ki Hai Jo Kisi Ka Ho Gaya, Pyar Hi Mein Kho Gaya. Hemant Kumar has given voice to the male songs. Jaag Dard-e-Ishq Jaag, Zindagi Pyar Ki Do Chaar Ghadi Hoti Hai, Aye Baad-e-Saba Aahista Chal, Mohabbat Aisi Dhadkan Hai, Aa Ja Ab To Aa Ja Meri Kismet Ke Kharidaar, Mujhse Mat Pooch Mere Ishq Mein Kya Rakha Hai, Mohabbat Mein Aise Kadam Dagmagaye, Dua Kar Gham-e-Dil Khuda Se Dua Kar etc. are all real gems which the music-lovers can keep on listening to without getting tired. There is only one song in the movie which has been prepared by a different team of composer, lyricist and singer. It’s Aa Jaan-e-Wafa Aa which has been written by eminent Shaayar Janaab Jaanisaar Akhtar, composed by Basant Prakash and sung by Geeta Dutt. 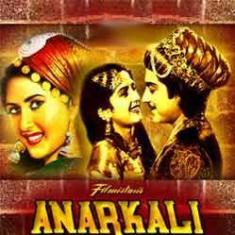 Overall, Anarkali is a nice entertaining movie made on the legend of Salim-Anaarkali. We will never be sure as to whether really there was some girl known as Anarkali (or Naadira) in the life of the Mughal prince Salim (later became famous as Jahangir) or not. But those who believe in true love, will always consider it as real only. It’s definitely some notches below the epic known as Mughal-e-Azam, still it’s worth watching. If you love its songs, then you will definitely like it.

A Chartered Accountant with literary passion and a fondness for fine arts
View all posts by Jitendra Mathur →
This entry was posted in Movie Review and tagged Movie Review - Anarkali. Bookmark the permalink.