The guilt of mixing personal and professional life

Kasoor (guilt) is a movie from the Bhatt camp of Bollywood which shamelessly steals stories from the Hollywood movies and put them before the ignorant Indian audience by Indianizing their milieu and characters. Kasoor (2001) is one such movie only which is a clear-cut rip off from the Hollywood thriller – Jagged Edge (1985). However the movie is well-made and entertaining right from the start to the finish.

This is the story of a young and gorgeous female lawyer who is trapped by a criminal through his sweet talks and fake love. The emotional lady, working in good faith, and fascinated by the charms of the cunning criminal, commits the error of mixing her personal life with the professional one, falls into the love of the prince-charming who has been charged for the murder of his wife and quite naturally, performs the job of his defence lawyer, not by her brains but by her heart, seeking wholehearted help of her best buddy and finally gets her lover-cum-client acquitted. The truth comes out before her afterwards only.

I do not put this movie into the mystery genre because there is little doubt about at least the identity of the murderer. Instead, I put it under the category of court-room dramas because it’s the scenes of the court-room only which makes the movie a thoroughly interesting and entertaining one and keeps the viewer glued to the screen throughout. The entry and exit of different supporting characters in the court-room drama add spice to it. Since the central character of the movie is an emotional lady who can be won over by passionate love, there is ample doses of romance and emotion too for the viewers. 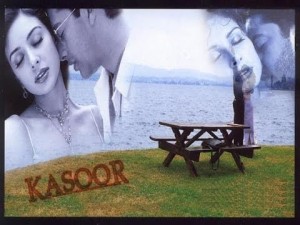 Mahesh Bhatt, the writer (?) and Vikram Bhatt, the director have adapted the plot of Jagged Edge quite skillfully for the Indian audience. They have been ably supported by the cinematographer (Praveen Bhatt), the dialogue-writer (Girish Dhamija) and the performers.

Lisa Ray’s dialogues have been dubbed in the voice of someone else, but this gorgeous lady has infused life into the role of the intelligent but emotional lady-lawyer whose sentiments make her err. Aftab Shivdaasaani has done the job of the accused quite admirably and at least in the scenes filled with love and delicate sentiments, he is just superb. Apoorva Agnihotri has underplayed the role of the heroine’s best pal, nicely. In the movies of the Bhatt Camp, the supporting cast remains more or less the same (like permanent labourers) and they perform according to the need of the plot and as instructed by the director. However, Ashutosh Rana stands out with his first rate performance in the role of the investigating officer. In fact, the first 30-40 minutes of the movie belong to him only and it’s his performance which makes the viewer to go through the rest of the movie.

Nadeem-Shravan did not get any award for the music of this movie which is definitely an injustice to them because the music (containing the very very meaningful and touching lyrics of Sameer) is soul-comforting and memorable. The album contains six songs and all six are excellent (the first two being outstanding in my opinion) – 1. Kitni Bechain Hoke Tumse Mili, 2. Jo Meri Rooh Ko Chain De Pyar De, 3. Kal Raat Ho Gayi Mulaqaat Ho Gayi (only in the album, not kept in the movie), 4, Dil Mera Tod Diya Usne Bura Kyun Manoon, 5. Mohabbat Ho Na Jaaye, 6. Koi To Saathi Chaahiye. If not for the story, the movie can be watched for the songs themselves.

I had watched this movie in the year of its release, i.e., 2001 and recently I watched it again on internet. The viewers who have not seen Jagged Edge, will find it quite interesting. And even if you have watched the Hollywood movie but you are a melody lover and like high-intensity court-room dramas (like me), you will find this watch a satisfactory one for sure.

2 Responses to The guilt of mixing personal and professional life