Posted on November 2, 2016 by Jitendra Mathur

Today is the 13th birthday of my little son, Saurav. I used to see several dreams for my life during my childhood and my adolescence. Unfortunately, almost all of them have got shattered to pieces when coming across the reality of life. But, as a normal father, I see dreams for my children’s future too. I want my children to gain everything they desire and deserve (unlike their father). I happened to watch such a movie only which is based on the dreams of a father for his little son and the misunderstandings and tensions between them on account of those dreams. This movie is Ehsaas (2001). 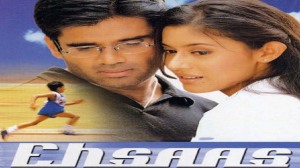 Ehsaas (feeling) is the story of a widower – Ravi (Sunil Shetty) who could not fulfil his dream to become an ace athlete but now wants his son – Rohan (Master Mayank Tandon) to fulfil that and get everything in his life which he (the father) could not get. For this purpose, he behaves with him like a strict disciplinarian without caring for the fact that his harsh attitude is taking his little son mentally away from him. The child, Rohan has started disliking his father and a rift has propped up between the father and the son which is not known to the loving father. A divorcee lady, Antara (Neha) lives in the neighbourhood of Ravi with her mother (Kiran Kher) and though she has a liking in her heart for Ravi (in addition to her affection for little Rohan), she does not approve of the highly strict approach of his towards Rohan. Ravi is training Rohan for a race and arranging all the requisite facilities and equipments for him despite his limited earnings and financial resources. Ravi’s dream of seeing his son winning the race is shattered with an accident of Rohan. Thereafter, firstly, Ravi is misunderstood by both his son as well as Antara. However Rohan realizes his father’s love for him and he reciprocates it by participating in the race despite his injury. He is not able to win the race but the heart of his proud father. The ending scene unites Ravi and Antara also when both of them realize their love for each other and the pain they would feel if distanced from each other. 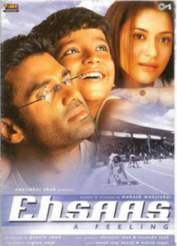 Ehsaas is the movie of Mahesh Manjrekar whose maiden directorial venture – Vaastav (1999) was a box office hit and it had fetched the best actor awards for Sanjay Dutt. After that formula-based movie, Mahesh Manjrekar directed some low budget but down-to-earth, realistic and touching movies. Ehsaas is one of them. It was not a box office grosser. However this simple movie is touching and lovable. The father-son relationship is the premise of the movie and the coconut like character of the father (hard when looked from outside but very soft inside) is heart-conquering. By my own experience, I know that a loser always wants his progeny to be a winner in his / her life and that’s how I am able to relate to the character and the story. No loving father wants his son / daughter to come across the losses, deprivations and frustrations that he has undergone in his life.

The movie emphatically underscores this fact that despite the love for the child and a desire for the betterment of his / her life, the parents have to understand child psychology and mould their own approach and behaviour according to the situation and try to avoid hurting the feelings of the little one. A child may not be mature enough to understand your intentions but you should be mature enough to understand his / her feelings. Military-like discipline may come out good in the long run but demonstrating your love and affection for the child is equally important. Understand him / her, lest he / she should misunderstand you.

Through the indirect and unspoken love of Ravi and Antara for each other, the director has demonstrated this human aspect of life with finesse. Saying ‘I love you’ is not required (it appears stupid also for mature people) but it’s better if the sentiment is conveyed through gestures at least. Ravi feels his love for Antara when she is about to depart for US, thinking that Ravi will always remain ignorant of her feelings. The happy ending tells that small joys are always scattered around us which can be turned into big ones by ourselves.

The climax in which Rohan participates in the race despite being physically unfit, is quite impressive and touching. The director has kept the movie realistic by showing that injured Rohan is not able to win or complete it though he could have gone for a filmy climax by showing him as winning it. I admire his better sense which has kept this movie down-to-earth and reliable.

The complete milieu as well as the characters of this movie are simple and utterly real. Not only the lead characters but also the supporting characters are human and appear to be of this world only.

The production value of this low budget and simple movie is bound to be modest. However technically, the movie is good. The cinematographer has captured the real life of the countryside of Goa (where the story is set) and the natural beauty prevailing there fantastically. Editing is also good though the length of the ending scene could have been curtailed.

Whatever may be people’s opinion about Sunil Shetty, I have always been his admirer. He has delivered a very impressive performance in the role of the father who dreams big for his son but hides his true love from him and allows his strict and disciplinarian form only to appear before him. Master Mayank as the little son is equally impressive who finally comes to realize his father’s love for him and then demonstrates to him that his love for the father is in no way any less. Neha, Kiran Kher, Shivaji Satam, Sanjay Narvekar, Rakhi Sawant etc. all have done quite admirably to support the father-son duo. Singer Sunidhi Chauhan has also done a cameo in this movie.

Anand Raj Anand’s music is good. In my opinion, Yeh Kaisa Ehsaas Hai sung by Sonu Nigam and Sunidhi Chauhan is the best from the album. However the other songs are also good to listen (and feel if you pay attention to the lyrics). The songs of this movie were not chartbusters but listening to them provides a soothing experience to the listener’s heart.

Ehsaas is an out and out simple movie sans all the formulae viz. romance, comedy, action etc. Hence this sentimental movie is not for those who like to see larger than life characters and situations on the screen. It’s for sentimental people like me. I recommend this more than a decade old underrated movie to the viewers liking emotional family dramas and willing to learn something about fostering of the children.

A Chartered Accountant with literary passion and a fondness for fine arts
View all posts by Jitendra Mathur →
This entry was posted in Movie Review and tagged Movie Review - Ehsaas. Bookmark the permalink.

6 Responses to A touching father-son saga