That Diwali at Naaradanandji’s residence

In my blog post ‘Naaradanandji’, I had paid tribute to my music teacher – Pandit Naaradanand Shaastri who was indeed a music maestro but who never got his due from the world because he lacked in salesmanship and could not sell his talent properly. But the exemplary thing is that he devoted his entire life to music, first learning and then teaching. I came across him at Rawatbhata where I served at the Rajasthan Atomic Power Station (a unit of Nuclear Power Corporation of India Ltd.) during 2001-2007. In those days, he used to live in a temple in the nearby Gurjar Basti (a rural colony of the Gurjar community whose main business is milking). Considering his talent and his music-related service rendered to the employees and their families for a nominal charge, we arranged a quarter for him in the colony of the organization, convincing the top management for allotting the same to him. There are many residential colonies for the employees of the atomic power station with different names. That particular colony (later abolished) was in a downward area and the number of the quarter that was allotted to him was C3B-24.

Naaradanandji was originally from a village Peepli (in the district Rajsamand, Rajasthan) where his family members used to live. When Diwali of 2002 came near, he went to his village to spend the festival with his kin. To take care of his house, he had handed over one key of his house to his neighbour in the colony and one key to myself. In his absence, I visited his house almost everyday, did the sweeping work there and spent some time on the harmonium lying there, practicing whatever had been taught to me by him. 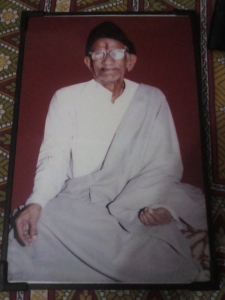 When the Diwali day came; in the evening, a thought came to my mind which I shared with my wife. I suggested to her why not light lamps at the residence of Naaradanandji too as to why should the house of my Guru remain in dark in the night of the Festival of Lamps ? My wife readily agreed to it. At that time, my family was a small one consisting of myself, my wife and my little daughter only. So we three set off on our scooter from our residence (Quarter No. II / 25 J in Anu Kiran Colony) carrying some earthen lamps, oil, cotton, matchsticks etc. with us. By that time (around 7.30 p.m.), we were finished with our own Diwali Pooja and lighting of lamps at our home.

After a drive of 5-6 minutes, we reached his home which was, quite naturally, sunk in dark. I unlocked the door and put the lights on. My wife swept the floor of that small (two small rooms and a kitchen) quarter first and then we lighted up the house with earthen lamps containing oil and cotton wicks which we lit with matchsticks. My little daughter was not fond of crackers even in her childhood and hence we did not fire any crackers there but stayed in his house for around 20-25 minutes. I silently prayed to the Lord for the good health and good life of my Guru before we locked the house again and set off for our house. While returning, not only my wife and daughter were happy to have lighted lamps on that day in one more house but I also had a sense of satisfaction that in addition to my own home, I had lighted up the home of my Guru also who was spreading the light of his knowledge (of music) in all the directions which covered my heart too.

Fourteen years have passed since then but the memories of that evening and that small time period spent there are still fresh in my heart.

A Chartered Accountant with literary passion and a fondness for fine arts
View all posts by Jitendra Mathur →
This entry was posted in Uncategorized and tagged C3B-24, Diwali, Guru, music teacher, Naaradanandji, Rawatbhata. Bookmark the permalink.

7 Responses to That Diwali at Naaradanandji’s residence