Had I been a filmmaker, I would have picturized it

Gulshan Nanda is quite a familiar name for the Bollywood movies. Several hit movies like Sharmeelee, Kati Patang, Neel Kamal, Naya Zamana, Daag, Ajanabee, Jheel Ke Uss Paar, Mehbooba (novel – Sisakate Saaz), Kaajal (novel – Maadhvi), Khilona (novel – Patthar Ke Honth) etc. have been made upon his novels. However, this time I am not reviewing any movie but a novel written by him upon which no movie has been made. I am not a filmmaker. Had I been, I would have made a very good family drama on this novel which is just very very good. When I had read it first, thoughts had come to my mind for making a movie upon this story. Well, neither I have made, nor anybody else. However it does not dilute the quality of this novel – Shagun (something given as symbolic to augur an auspicious relationship mostly the matrimonial alliance). 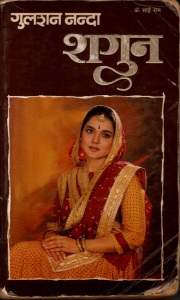 Shagun is a triangular family drama consisting of the husband, the wife and the husband’s ex-wife to which the daughter born out of the first marriage is also inseparably associated. Ajay has got divorced from his wife Ruby, living in Mumbai with his daughter Rashmi whose custody has been entrusted by the court to her mother. Shaarada is also a woman with the past of a broken marriage behind her. She lives in Delhi with her parents now. Both these divorcees are brought together by Ashok who is a handicapped person and uses artificial feet for normal movements. He is a person with a heart of gold. Being a good friend of Ajay on one hand and the deemed brother of Shaarada on the other, he arranges their meeting and thereafter their marriage too when both these protagonists are convinced that they will be able to make a happy marriage by understanding and sharing the pain of each other. Soon after marriage, Ajay moves to Mumbai for the sake of his career and starts living with his old friend Anwar who only had introduced him to Ruby. Soon Ajay arranges another job and accommodation and Shaarada too moves to Mumbai to live with her husband. However this newly found happiness of Ajay fills Ruby with jealousy and she starts inducing Ajay once again, using two weapons – one being her womanly charm and the other being her daughter, i.e., little Rashmi who is the dearest one in the world to Ajay. Ajay falls prey to her tactics and his marital life with Shaarada remains no more a happy one. The tussle between the two ladies and the man caught between them, being emotionally tied to his little daughter, leads to the touching climax of the story.

The novel was first published in late eighties and I read it for the first time soon thereafter. Since then, I have read it many times as it is a very interesting emotional story written by Gulshan Nanda in his famous style. Gulshan Nanda was quite proficient in presenting simple and ordinary stories in the utmost interesting way, using poetry, Sher-o-Shaayari and touching words. Being a screenplay writer too, he was quite proficient in bringing about curiosity-provoking twists and turns in the story plot, thereby making the reader to read the novel till its very last word. Shagun is another example of his outstanding skill. By reading it, anybody can very easily understand the reason behind his being the bestseller of Hindi pulp fiction for around three decades.

The characters of Ajay, Shaarada and Ruby have been developed very well. Ajay is a man of self-respect but he is vulnerable to womanly charms too and his daughter is his biggest weakness. He is not unfaithful to Shaarada but still trapped by Ruby who had ditched him once in his life. This character is a classic example of a man approaching the same woman again after experiencing a heart-tearing and humiliating break-up with her. But he is quite natural and the events taking place with him do not look unreal from any angle.

Ruby is a very cunning modern woman who is extremely pretty and very intelligent as well to know properly where and how to use her womanly charm for the maximum benefit. She liked and married Ajay but never respected him. She always wanted him to be subservient to her. This attitude of her only had led to the breakage of their marriage. However she did not change even after that and used her little daughter Rashmi as a pawn on the chessboard of her interactions with Ajay. She is a woman who is never ready to digest any defeat. When Ajay marries Shaarada, Ruby’s jealousy and sense of defeat is at its worst.

Shaarada is a kind-hearted and sensitive woman who has already suffered a setback in her life prior to meeting Ajay. Now another setback in the form of Ajay’s closeness to his ex-wife Ruby is not bearable to her. She is full of self-respect and quite confident of her to make a good mother for her step-daughter Rashmi. Her motherly affection for a little girl who was given birth to by another woman, is heart-warming. She is always persuading her husband to keep a distance with Ruby and manage her meeting with Rashmi so that she could win her heart with her sensitivity and love.

The supporting characters of the novel – Ashok who is concerned about the well-being of both his friend and his deemed sister, Anwar as Ajay’s old friend, Rahuji as the business partner of Ruby, Jaanaki as the old maid of Ruby and finally Rashmi, the little daughter of Ajay who is always willing to get his father’s love and very much curious to meet her new mummy (knowing from Jaanaki that her father has remarried), all are able to leave their mark in the story. One major reason behind the popularity of Gulshan Nanda’s novels has been his characters’ looking natural also. While going through the narration covering the dialogues, actions and interactions of the characters, you find them seeming real flesh and blood ones, just standing or sitting before you in real life situations. You never feel that you are reading an imaginary story of imaginary people having come from any other world as was the case with the most of the pulp fiction writers who were his contemporaries.

After reading it, immediately the thought coming to my mind was that it’s a readymade material for a good social movie. However Gulshan Nanda could not find any producer to make a movie on this novel. I had thought in mind about picturizing this story on celluloid and I had finalized my cast too on paper. Since it was the time of the late eighties, I had planned to cast Vinod Khanna in the role of Ajay, Rekha in the role of Ruby, Ranjeeta or Anita Raj in the role of Shaarada,  Vinod Mehra in the role of Ashok, Pareekshit Saahni in the role of Anwar, Sulabha Deshpaande in the role of Jaanaki etc. Though I have never been concerned with the moviemaking field or never been in touch with anybody related to this line of work, nevertheless I very enthusiastically prepared the layout of the movie in my mind, the flow of the screenplay and sequence of events with the situations for emotional songs. I would have filled colours in my framework of the movie by putting it on celluloid if only I were a filmmaker.

Shagun is a Hindi novel and hence Hindi readers can definitely enjoy it. It makes a thoroughly engrossing reading with the curiosity factor remaining active till the very interesting and emotional climax. The language used by Gulshan Nanda is highly admirable. The novel is undoubtedly a treat for the readers of Hindi fiction.

A Chartered Accountant with literary passion and a fondness for fine arts
View all posts by Jitendra Mathur →
This entry was posted in Book Review and tagged Book Review - Shagun (by Gulshan Nanda). Bookmark the permalink.

4 Responses to Had I been a filmmaker, I would have picturized it