Seven long years have passed since Naaradanandji left for his heavenly abode. Now only his memories are left with me and I am sharing them here.

I arrived at Rawatbhata (near Kota, Rajasthan) in January 2001 and got a type-II quarter (no. 25 J) in Anu Kiran colony. Just behind the line of our block there was a small village known as Gurjar Basti where Gurjar community (milkmen) lived. I came to know of a very elderly person teaching music there who lived in the temple of Devi Maa. I approached him and started learning music from him. He was none other than Naaradanandji, aging at least 75 years at that time. Since there has been a very old harmonium in our house since the days of my mother’s marriage (my mother being involved in music, that harmonium had come in her dowry), I had to learn from him and practice at my home where I used to live alone for the most of the time (due to my wife’s doing her govt. job at another place).

After one month, Naaradanandji kicked me out of his studentship on the ground of my not practicing sincerely at home. After a few months, I requested him again to take me back into his studentship and he agreed. And then the association lasted for around six years till the time I finally left Rawatbhata in July 2007. 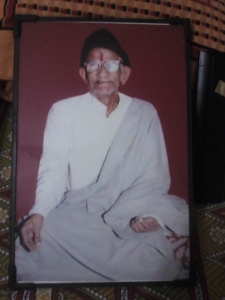 I could not learn music because of my inborn deficiencies to pick up a Swara by hearing and understand the rhythm factor and more so because of my lack of sincerity. But I got the pleasure of serving Naaradanandji. I had not been fortunate enough to serve my father due to family intricacies but at least to some extent, I could serve Naaradanandji. Seeing that I was not able to pick up Swaras, he started teaching me the notations of some good songs so that I could play them on harmonium and sing them. He had to change his residence many times and because of loneliness, he always needed someone to take care of him. Myself, alongwith some of his devoted pupils – Bansi, Bhagwat, Ripendra Singh and a few others used to do one thing or the other for him.

He charged a very nominal fee – Rs. 200/- per month. Even then he could not earn properly to make both ends meet. He had had a carefree life, his children (two sons and two daughters) not being able to do anything for him (his wife being dead long back). In fact, he had devoted his whole life for music which was a worship for him and not a profession. But he was not practical enough to sell his Gyan to earn money. He could not impart his deep knowledge to any of his progenies too.

Due to lack of students, he left Rawatbhata in August 2004 and went to his native village – Peepli (district – Rajsamand, Rajasthan). He returned upon my pursuation in 2006. After I left Rawatbhata, he also left within a few months, never to come back.

During our association, gradually I came closer and closer to him and I always got a pleasure in serving him. I still remember lighting Diwali lamps with my wife and little daughter at his quarter (C3B-24) in 2002 and firing crackers with my son at his quarter (H1B-13) in 2006. Though I did not cook food for him (because I have never been a good cook), I prepared tea for him, cleaned his room and brought small things for him from the market. However I had made it a habit to check his well-being almost everyday and enquire from him whether he needed anything. I used to sing my favourite songs to him and seek his opinion about my singing. One more thing which discussed with him was the classical Raagas upon which the songs were based. He had such a deep knowledge that after listening to any song, he could instantly tell the relevant classical Raaga.

He made me to practice hard for the cultural meet of the organization (NPCIL) in 2006 and prepared me with his help to sing Mukesh’s great song – Suhaani Chaandni Raatein Hamen Sone Nahin Deteen in the solo vocal event of that . He had also been invited to that event as an esteemed guest. Based upon the preparation I did with his help, I sang well and though I did not win any prize, he said to me – ‘You sang very well.’ And it was the biggest award for me.

I saw him last in July 2007 at his residence at H1B-13 quarter I had arranged for him in the colony through the management of the organisation. However I used to have telephonic talks with him. He was so overwhelmed by my sentiments (he had realised my concern and attachment for him) that he always blessed me from the core of his heart and wished for my well-being. I shifted to Hyderabad in October 2009 and within a few days of that I came to know from Bansi over phone that he was no more (passed away on 01.11.2009). In fact, he had suffered so much in his life that I wasn’t much sorry to hear that though personally it was a big shock for me.

While praying for the peace of his soul, I feel that his life proves that an artist may have to live his life under poverty if he is not practical enough to extract money from this world on the ground of his art. Creativity and talent is not enough to survive in this cruel world which is captured by good salesmen only. Salesmanship is the thing which gets the better of everything else. Much less talented people earn lots of bucks and live a luxurious life whereas a person of the stature of Naaradanandji has to live and die poor if he is not a good salesman.