A tribute to the Ghazal maestro

Posted on October 9, 2016 by Jitendra Mathur

It’s been five years since Ghazal maestro Jagjit Singh passed away on 10.10.2011 . The world of Ghazals and Shaayari was mourning the sad demise of the one and only Jagjit Singh then. Ghazal singing had never been a profession for him. He always took it as the worship of the Lord. His soulmate Chitra stopped singing after the demise of their the only son – Vivek in an accident in 1990 but Jagjit did not stop it. Can a devotee stop worshipping the Almighty in any condition ? No. Hence Jagjit Singh continued, suppressing and trying to forget the grief in his heart.

Jagjit Singh always sung from the heart. And he always chose Ghazals and Nazms of very high literary quality for singing. That’s how he became instrumental in popularizing Ghazals as a form of light music. He sang for Bollywood movies too. The Ghazal, Nazm and songs of Saath Saath (1982) and the immortal love song – Hothon Se Chhoo Lo Tum (Prem Geet – 1981) are a few illustrations. However Mahesh Bhatt’s Arth (1982) is different in the sense that Jagjit Singh not only sang the Ghazals and Nazms but he only composed their music also. The music director of Arth is none other than Jagjit Singh himself. Though he had composed the music of Prem Geet also, Arth is his unique contribution to Bollywood music because in addition to composing the music, he and his soulmate Chitra sang all the Ghazals and Nazms included in the movie and all are invaluable gems for the lovers of music and Shaayari. I pay my tribute to him through review of this movie which was considered quite bold at the time of its release.

Arth (meaning) is the story of extra-marital relationship of Inder (Kulbhushan Kharbanda) and Kavita (Smita Patil). Inder is married to Pooja (Shabana Azmi). Inder leaves Pooja for the sake of mentally insecure and unstable Kavita but finally Kavita also discards him. Pooja is heartbroken whom Raj (Raj Kiran) tries to console through his love for her. However Pooja decides to search an identity for herself in the world, independent of the support of any male. 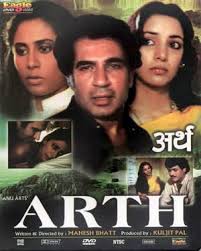 Mahesh Bhatt used to direct average movies prior to Arth (Manzilen Aur Bhi Hain, Lahu Ke Do Rang, Vishwasghaat etc.). Arth was a milestone in his directorial career after which he never looked back. He always blew the trumpet that Arth was inspired by his own life-story (Parveen Babi being the abnormal other woman in his life). Whether it has anything to do with his life or not, Arth is an admirable movie. A good story was taken and the climax made the announcement of the true woman-lib, i.e., liberation from the shackles of dependence on men. 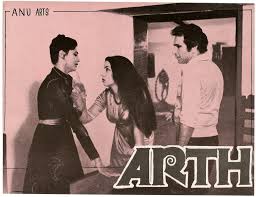 Arth boasts of power-packed performances of all the three principal actors – Shabana Aazmi, Smita Patil and Kulbhushan Kharbanda. I won’t try to show lamp to the sun by saying anything about the leading ladies who were the pillars of the parallel cinema movement of the seventies and the eighties (Shabana Aazmi won the national award as well as the Filmfare award for the best actress for her performance in Arth). However I say about Kulbhushan Kharbanda that it is definitely one of the best ever performances of this underrated actor. 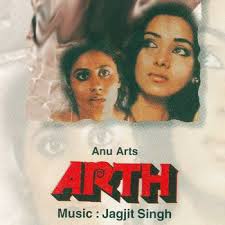 But the trouble lies in the fact that Mahesh Bhatt painted all these three characters with very thick colours. So thick that they lost their naturalness and turned from flesh and blood human-beings to lifeless portraits on the canvas. Mahesh Bhatt could not restrain himself in certain matters and went for exaggeration. And his over-enthusiasm did not allow the movie to become a classic or a masterpiece. What Kavita realized later (that when Inder could leave Pooja for her, he could leave her too for someone else), could have been (and should have been) realized by her earlier too. Inder returns back to Pooja (after he has been discarded by Kavita) like a beggar. It does not match his basic character.

Technically, the movie is good, if not excellent. Vikram Bhatt remade this movie as Ankahee (2006) but could not repeat the magic of the original. 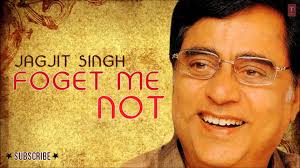 Ultimately, it’s the music composed by Jagjit Singh, using the Shaayari of Shabana’s father and the great Shaayar – Janaab Kaifi Aazmi which makes this movie an unforgettable one. You can forget the movie, not its songs. Whether it’s the Ghazals – Tum Itna Jo Muskura Rahe Ho and Jhuki Jhuki Si Nazar Beqaraar Hai Ki Nahin (both sung by Jagjit Singh himself) and Tu Nahi To Zindagi Mein Aur Kya Reh Jaayega (sung by Chitra Singh) or it’s the heart-piercing Nazms – Koi Ye Kaise Bataaye Ki Woh Tanha Kyon Hai and Tere Khushboo Mein Base Khat Main Jalaata Kaise, every piece is enchanting for the listener. Jagjit himself sung the songs because no other voice could do justice to the lyric and the composition. Ghazal word has been derived from Ghazala (female deer) and the painful sound coming from its throat is known as Ghazal. And that’s why the true Ghazal singer is one who is able to convey the Soz (pain) inherent in the words. Jagjit Singh with his God-given voice perfectly suiting Ghazals and Nazms, only could do it as far as the songs of Arth are concerned. The music of this movie is an invaluable jewel in the treasure of Bollywood music.

While recommending this sentimental movie with a strong message to the people interested in watching meaningful cinema, I empathize with Chitra Singh who has been a loser all the way. First her and Jagjit’s son died in 1990, then her daughter through her earlier marriage died in 2009 and then her soulmate who perhaps loved her more than his own life, was also no more. Oh God ! The Ghazal sung by her in Arth – Tu Nahi To Zindagi Mein Aur Kya Reh Jaayega (without you, what will remain in this life for me) seems to have come upon herself only. I pray to the Almighty to take care of the unfortunate soulmate of Jagjit Singh.

A Chartered Accountant with literary passion and a fondness for fine arts
View all posts by Jitendra Mathur →
This entry was posted in Movie Review and tagged Movie Review - Arth. Bookmark the permalink.

4 Responses to A tribute to the Ghazal maestro