Posted on September 25, 2016 by Jitendra Mathur

24th September is the birthday of a great revolutionary of this great country – a lady whose contribution to the Indian freedom struggle is no less than that of any gentleman patriot. She is Madam Bhikaji Rustom Cama who has the proud distinction of hoisting the tricolor for the first time, declaring to the whole world loud and clear the collective will of the Indians to get free from the shackles of the British rule. 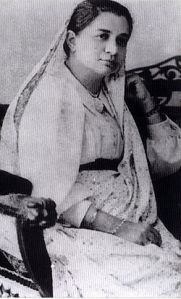 This brave lady was born on 24th September, 1861 in the house of a Parsi trader – Sohrabji Premji Patel in Bombay. She got married to a rich trader – Rustom Cama but the restlessness in her heart aroused by seeing the ill-effects of the oppresive British rule in India and the plight of the Indians thereunder caught her attention. Her human sentiments could not stop her in the boundary of her household when Bombay Presidency was hit by Plague in 1896. She came out of her house, helping the poor victims of the deadly disease by all means. In her bid to do the maximum for the Plague patients, herself caught the disease and sent to Britain for treatment. But destiny did not allow her to return to India.

She came across a great revolutionary – Shyamji Krishna Varma and she started a patriotic organization with him – India Home Rule Society in 1905. She was told by the British authorities that she would be allowed to return if she gave a written statement not to participate in nationalist activities. Madam Cama straightaway refused and preferred living out of her motherland only to serve her better.

Thereafter her patriotism rose like the high tides in the ocean, never to come down. She worked relentlessly, spreading the message of independence far and wide. She worked in association with the Grand Old Man of India – Dadabhai Naurozi, travelled through several European countries and came into contact with like-minded revolutionaries fighting for the freedom of the nation from the shackles of slavery. She decided not to return until the objective of freedom was achieved, attaching her fate with the patriots working abroad, ever ready to lay their lives for the cause of the motherland. In Paris, she established Paris Indian Society in association with Singh Rewabhai Rana and M.B. Godrej. A blood boiling patriotic newspaper – Vande Mataram was started by these people.

International Socialist Conference took place in Stuttgart (Germany) in 1907 in which Madam Cama participated and raised her voice for human rights, equality and autonomy to be given by Great Britain to her colonialized nations. She hoisted the tricolor (in somewhat different from the one it bears today) there, symbolizing the forthcoming independence of India and sending Britain a clear message that India is destined to gain freedom, sooner or later.

Madam Cama stressed gender equality too. Speaking in Cairo (Egypt) in 1910, she frankly asserted before the audience, ‘I can see the representatives of only half the Egypt. May I ask where is the other half ? Sons of Egypt, where are the daughters of Egypt ?’ However she gave gaining of political independence precedence over practising gender equality.

The French govt. kept her under house-arrest for four years when the first world war started under the accusation that she instigated the Indian soldiers not to participate in the war on behalf of the British. After Vande Mataram ceased to publish due to unavoidable reasons, Madam Cama started Indian Freedom in place of it. Incessantly supporting Vinayak Savarkar and other revolutionaries directly as well as indirectly, she remained in exile till 1935 and returned in 1936, only to take her last breath in the Parsi General Hospital, Bombay on 13.08.1936. When she died, perhaps nobody in India (even Bombay) took notice that a great patriot had left for her heavenly abode.

Today, we the Indians, have all the time to keep track of all kinds of useless things happening all over but not to remember the great martyrs and patriots who lived and died only to ensure that the forthcoming generations (that is, ourselves) could breath in the air filled with freedom. I salute this great lady on her 156th birthday. May her sole rest in peace.

A Chartered Accountant with literary passion and a fondness for fine arts
View all posts by Jitendra Mathur →
This entry was posted in Uncategorized and tagged Madam Bhikaji Rustom Cama. Bookmark the permalink.