Searching for the lost love in someone else

Human life is strange as well as complicated. And so are the male-female relationships. You never know whom you fall for, how, when and why. The ‘why’ is the most ticklish among these questions and normally it is difficult to answer. However sometimes, it is mandatory to search for its answer to understand and resolve the intricacies of life and relationships. Doosara Aadmi (1977) made under the banner of Yash Raj Films and directed by Yash Chopra’s assitant – Ramesh Talwar is a sentimental drama exploring this ‘why’ which plays havoc in the lives of its characters. 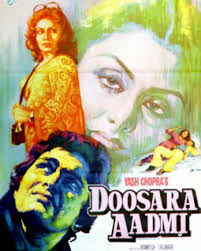 Doosra Aadmi (the other man) is inspired by the Hollywood movie – Goodbye Again (1961) which is a celluloid adaptation of Francois Sagan’s bestselling novel – ‘Aimez-vous Brahms ?‘ This is based on the plot of a mature woman’s getting attracted to a man younger in age to her because he has resemblance with her erstwhile lost love. Since this youth is a happily married person, the leading lady’s throwing herself upon him leads to cracks in his marital relationship and everything goes in the negative direction until a true friend and well-wisher of the mature lady guides her in the right direction. 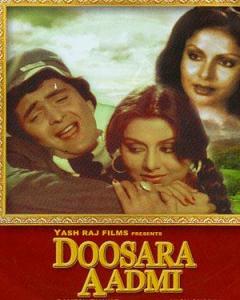 The pivotal character of Doosara Aadmi is Nisha (Raakhee Gulzar) whose beau – Shashi (Shashi Kapoor) is no more and to get her out of his haunting memories, she has converted herself into a workaholic. Being a freelancing professional, she is approached by a budding entrepreneur – Karan (Rishi Kapoor) who employs her in his newly established advertising agency. Karan has entered into marriage with Timsi (Neetu Singh) after their courtship and they are a happy couple. With the entry of Nisha in Karan’s life, troubles start for their marital relationship because Nisha visualizes her dead beau – Shashi in Karan and her infatuation for Karan increases with the passage of time. Karan too does not remain unaffected by it and soon this attraction becomes a two-way traffic. Cracks appear in the home of Karan and Timsi and it is on the verge of complete breakage when Nisha’s close friend and well wisher – Bheesham (Parikshit Saahni) makes Nisha realize her mistake and she steps out of the life of Karan.

True to the repute of Yash Raj banner, Doosara Aadmi is also studded with romance, beautiful locations and good songs. The red hot pair of that period – Rishi Kapoor and Neetu Singh rocks in this movie too. A sizable part of the script has been devoted to the love and marriage of the young pair. However the main track belongs to Raakhee and presents Parikshit Saahni too in a significant role.

I know it by myself that once you do not get united with the love of your life or some unfortunate incident takes him / her away from you, you (being a true and devoted lover) start looking for him / her in every new face you come across and when you find even the least of similarity between the two (i.e., the lost one and the one now in front of you), you happen to visualize the face of the bygone one in that of the present one. It is natural because we have learnt to love and certain lovers are so sincere that it becomes irresistible for them. But the reality of life as well as the world is that the gone one does not come back. And it may prove fatal to impose his / her memories (and image) on someone else. The relationships founded this way may prove to be brittle like the castles made of sand, not able to sustain even a gust of the wind. Doosara Aadmi underscores this fact.

The narrator has kept the bubbly romance in the initial portion of the movie and once the main track starts, not allowed any digression thereafter. Since the movie is based on a sentimental and serious theme, the entertainment quotient sinks in that part and despite the good script and the touching performances, a feeling of heaviness envelops the spectator. This movie, therefore, is not everybody’s cup of tea.

But the movie is well made all the same. Perhaps it would have been much better, had Yash Chopra directed it himself. Anyway, Ramesh Talwar has done his job well. The character of Parikshit Saahni who is a true well wisher of Nisha (actually he is the friend of her deceased beau – Shashi) may not be understood properly by viewers who watch movies for light entertainment. However such characters are there in real life and due to their philosophy of non-interference in other person’s affairs, they keep aside first but when the water appears to be going above the danger level, they have to get rid of their inertia and speak out what they feel correct. 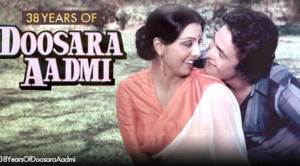 Technically the movie is good. Several beautiful locations shown on the screen are eye-soothing. The movie is not unduly long and ends at the appropriate point.

Casting Shashi Kapoor in the role of Raakhee’s dead beau and Rishi Kapoor in the second man (Doosra Aadmi) she comes across is an example of very thoughtful casting because the faces of the real life uncle (Shashi Kapoor) and nephew (Rishi Kapoor) resemble (their mannerisms also resemble) and thereby a solid reason has been furnished for Raakhee’s getting attracted to Rishi Kapoor. Shashi is wonderful in the cameo whereas Rishi and Neetu have always been made for each other whether it’s the reel life or the real life. Parikshit Saahni has delivered a mature performance (the way he has always done throughout his career) in the role of Bheesham. Finally, it’s Raakhee Gulzar who is the heart and soul of this Indian adaptation of Goodbye Again. She has shown her class in the author-backed role.

Doosara Aadmi was a box office flop and it’s quite natural too because this movie is emotionally heavy and not fit for light entertainment. However one more reason for the box office failure of this otherwise good movie is that it was ahead of its time. In that period, the Indian audience was not mature enough to digest the attraction of an elder woman towards a younger man (especially when the man is married). That maturity came to it with the passage of time and later on we saw the acceptance of such movies (or such tracks in multilayer movies). Now this movie can also be watched, understood, felt and accepted by the viewers. It was remade as Dil Ne Phir Yaad Kiya (2001) but that movie was made very badly.

I liked this movie and despite certain weaknesses of narration and being too heavy at certain places, this movie is overall an admirable one. With my rating of 3.5 stars, I recommend it to those who like sentimental dramas and love triangles. The fans of Rishi, Neetu and Raakhee also should not miss it.

4 Responses to Searching for the lost love in someone else